Hospital Ships teams up with The Hips for album release show

Hospital Ships teams up with The Hips for album release show

On Friday night the songs inside Love Garden were as steamy as the air outside. Scenesters, decked in their cutoff shorts, arrived at the city’s favorite downtown record store to watch Hospital Ships and The Hips team up for an early show. 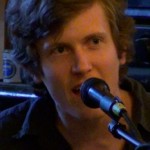 The Hips started things off with some new music. Every time I see The Hips, I think maybe…just MAYBE this time they’ll tone down the sexiness. And every time, I am dead wrong. It’s almost like they’re TRYING to get everyone’s panties in a bunch.

“Kissing Practice,” a smooth and sultry favorite among the locals, was played louder and more confident than ever. I’m pretty sure it made some girls at the show weak in the knees. You could almost hear them dropping like flies. The piano sounded especially beautiful on that song. In fact, the entire performance almost gave me chills.

The Hips are oh so very naughty, but at least they gave us some new songs tonight. 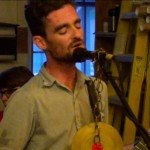 By now you might’ve seen the Hospital Ships music video for Galaxies that features Jordan Geiger and his lookalike dummy. For the past couple of weeks, that dummy has been stationed at Love Garden in anticipation of the album release. Tonight, the dummy’s head was severed and served as a “donation bucket,” as noted in the video below.

The band has been hard at work prior to the album’s release, and they’re about to head out on tour. When they do, they’ll be updating this nice little tour diary for everyone.

There’s nothing quite like a Love Garden show. One of the musicians playing tonight told me how important it was to him to play at Love Garden. It’s almost like a rite of passage for some bands. The mood was fantastic at the packed record store on Friday night, and most folks were smiling and chatting, beer in hand. I can’t imagine a better way to kick start a weekend.

Blast from the past: former Lawrence band The Capsules heading back into the studio