On Wednesday night Kansas City was treated to two of the wildest entertainers on tour this summer. Matt and Kim, along with The Thermals, took the stage at The Beaumont and left us hanging on for dear life by the end of the night. 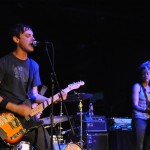 The Thermals started things off with some upbeat and poppy tunes. The rockers are a shiny, smiley bunch. The three-piece did a good job of doing a lot with very little. The band is comprised of just a guitar, bass and drums. But often times the guitar would drop out and we were left with a simple, yet very catchy, drum and bassline to keep us going.

I was particularly fond of the adorable and beautiful bass player (meow). She never missed a beat, and constantly hopped around while her bleach-blonde bangs flopped up and down with the beat.

The crowd was fairly amped up from start to finish. From the moment they arrived at the venue, they were ready to PARTY. In between bands, they did that shoving thing and a lot of folks got pinned up at the front.

Amid the crowd surfing, dancing and pushing, I started to wonder when the last time I saw a crowd this wild at The Beaumont was. The kids were going crazy, so you can only imagine how bonkers they got when the three-ring circus that is Matt and Kim took the stage. 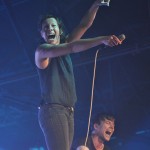 “You guys have been fucking going hard all night!” A very elated Kim was screaming out her approval of the energetic crowd while perched atop her drum set. Don’t you worry a hair on your pretty head, Kim. This crowd was just getting started.

Armed with nothing more than a noisy keyboard and a drum set, Matt and Kim lived up to their lively legend. The longer the night went on, the bolder they became.

The circus raged on, and ringleaders Matt and Kim used every ounce of energy they had to exhaust the audience and demand they sing along. “We are in this for the long haul!” yelled Kim.

They played all their hits, and peppered in some covers. Kim even did what I can only describe as a little booty dance when Matt mysteriously disappeared offstage for a couple of minutes. 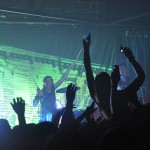 But climbing their instruments with their eyes and smiles flung as wide open as possible isn’t enough for these two. They have to get the audience involved as well. They called on the crowd to jump up as hard as physically possible, thrash about and even blow up a few balloons (as seen in the video below). You can’t rule out an elbow to the head or even a knee to the ribs at this show. Folks were straight up physical all over the place, and you were lucky to come out unbruised.

Then, the casualties started appearing. First, concert-goers who were drenched in sweat started clawing their way out of the tireless crowd. After that, I saw a few people get carried out due to minor injuries.

But still, the party was nonstop. Even the security guards were having fun with the balloons, occasionally swatting at them like playful little kittens. This type of show brought out the fun in everyone, so it’s no wonder the audience came armed with some of the best stamina I may very well witness this summer.

To view an unbelievable photo gallery from the night, please click here.