Blast from the past: former Lawrence band The Capsules heading back into the studio

When I was younger, I loved loved loved The Capsules. No matter how wound up I got, I could head over to The Bottleneck, and The Capsules (with the help of pixie-voiced Julie Shields) would carry me into a zen-like state.

Here’s an old clip I had of them playing at the Bottleneck back in 2004.

I played their music endlessly when I hosted shows (particularly the late night to early morning ones) at KJHK. I would receive several calls into the studio from listeners who said listening to The Capsules helped put them at ease and cured their insomnia. 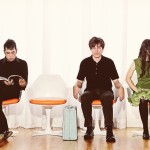 By now you get the point. The Capsules were an easygoing band that were more than pleasing to the ear. So imagine my excitement when I recently learned that they were heading back into the studio to cut an album.

Their last album, Long Distance Dedication, came out in 2009. Tracks like “Moving On” and “Don’t Be So Sad” remind me of how much I love their driving beats, which primarily showcased Julie Shields soldiering through the tracks with her steady finger picking. “The Cycle Starts Again” gives you a bouncy, playful beat; and “Fourth of July” is by far the catchiest of all the tracks, taking me back to a calmer time in the late 90’s.

By the time you get to “Hearts,” it feels like the entire album has played out like a nice Sofia Coppola film. There is a satisfying, yet playful sense of calm, and you’re left feeling a little more hopeful about your outlook on life. This is especially true with the final song on the album, “Traveler.” The deep drums give you the courage to march forward. Long Distance Dedication feels like a welcoming pat on the back that you needed at just the right time.

The Capsules have since relocated to Dallas, but it’s hard not to consider them locals at heart. It’s clear at times that they love Kansas, especially looking back on that concert they did at The Garden of Eden, a famous Kansas landmark.

I can’t wait for their next album (it will be their fourth full-length album). My excitement and anticipation for this album might stem from a sense of gratification knowing that they never really disappeared. In the song “Fourth of July,” Julie sings “don’t let us be a distant memory.” It’ll be hard to forget all of the wonderful shows I shared with The Capsules, as well as all the thankful, late-night callers into the radio station. Maybe that’s why I’m so grateful that they’re still at it, heading back into the studio, and ready to start the cycle again.