Editor’s Note: Nicholas Stahl did such a wonderful job reviewing the Quiet Corral album, we decided to ask him back for another review. He was quite eager to review the Spirit is the Spirit EP. 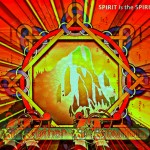 My first ever memory of music is resurrected every time I hear a song by The Who. More notably, “Pinball Wizard” instantly transports me back to the early 90s, sitting in the front seat of my grandmother’s car (way back when three year-olds could sit in the front seat), strumming my left handed seat belt guitar, attempting to achieve that same ferocity of Pete Townshend. Continually, I am revisited by my past through music. For some, it can define entire seasons. It is about time for everyone to start finding their “summer song” or album. I think I may have found one of mine.

Spirit is the Spirit’s debut EP, Mother Mountain is a soul-soothing 29-minute adventure of beauty, mystery, harmony and rhythm. Mother Mountain opens with a suspenseful instrumental collage of strange sounds that suddenly burst into a steady charge. As the vocal chant, which seems to be equivalent to the man power of a small army, begins, Spirit is the Spirit quickly demonstrates their brilliant use of melodic hooks.

Beyond melody, there is even more depth to how this band reels in listeners. Mother Mountain is incredibly, rhythmically layered. With two percussionists, Spirit does a great job creating rhythmic hooks that dynamically rival the rest of the group. Drums and other percussion on Mother Mountain influence a driving feel, lying in the background until they just cannot take it anymore. Like a small child who wants to jump up and say, “Hey! Look what I can do!” drummers, Evan and Noah, break into a fury of thoughtful syncopation just long enough to allow the harmonies to breathe, regroup and tag back in with full force.

Mother Mountain ranges dynamically from a quite whisper to triumphant marches. Unfortunately, this album is layered to the point that I can not comment on what most of the band is doing half the time. Well, I guess that isn’t such a terrible thing, but it makes my job a bit more difficult. Multiple members of Spirit play an assortment of instruments which opens up a world of possibilities. Some groups get lost in over instrumentation. Each track carries a similar band identity yet, every sound is carefully tweaked; sneaking in unexpected tones which add to the vast texture. The vocals cannot escape the somewhat unfair and nearly impossible to live up to comparison of harmonious bands like Fleet Foxes. Austen’s lead vocals soar upon the wings of the groups backing vocals.

In its entirety, Mother Mountain appears to chronicle the bands interaction with nature. At times the lyrics seem to take the form of a Willy Wonka type character, leading a tour of the mountain; he is infinite in wisdom. Other times, they represent the emotions of those small children, still full of wonder; they are discovering that there is so much more to the world than they may ever know. The final track on Mother Mountain titled, “We were only lookin’ at the moon” beautifully concludes this expedition. With lyrics like, “We were just kids, dancing in July”, there is no denying Spirit’s nostalgic connection with music. This album ultimately just makes me feel good. It is accessible, tasteful and beyond catchy… I mean, like really catchy. Austen’s voice soars upon the wings of the groups backing vocals. Spirit is the Spirit’s vessel is a giant bird-like creature, elegant and strong, racing through the forest of sound that is Mother Mountain. Have you ever seen the speeder bike chase in Return of the Jedi… yeah, like that.

We are going to do a little experiment in time travel. Do me a favor next time you are bored. Dig up those old mix cds, you guys remember those, right? Or throw that ipod on shuffle, lie down and just listen. Try your best to let the songs steer your thinking. See what memories arise. It won’t always be good ones, I promise. Life is not all puppies and candy. Just be thankful there are artists who “get it” enough to write songs that help us through those times. So what do you say? Hop in that musical DeLorean, let’s zoom this sucker up to eighty eight and see where it takes us.

Next post Blast from the past: former Lawrence band The Capsules heading back into the studio