A hot mess: Foster the People bring sweaty party to the Bottleneck 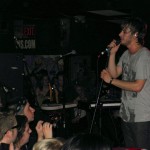 On Friday night I walked into what had to have been one of the sweatiest dance parties of the year. The Bottleneck was sold out, and folks were packed in like sardines for Foster the People.

The band had a bit of a rough day. They started their Friday bright and early over at Keggs and Eggs in KC. An early morning party to kick start your weekend should be fun, but it was almost no picnic for the band. Their bus had broken down on them (for the first time), but they made it a fun experience by renting a limo to get to the event. They tweeted a photo of it here.

By the time the crew was setting up at the Bottleneck, the air was so sticky and thick you could cut it with a knife. The band was already drenched in sweat when they took the stage. But it was well worth it. Because, even with the lights completely dimmed, the moment they set foot onto that stage, the place erupted with high-pitched screams from all the women (come to think of it, there were A LOT of honeys at the show). Not a bad welcome, for their first time in Lawrence. 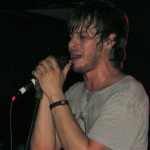 Then, as soon as they hit their first beat, the Bottleneck came alive. The audience erupted in dance, and I thought surely the floor would cave in. The drummers were going at it hard, and it was fun as hell watching everyone soldier through the heat and dance as energetically as they could. The entire band rocked out so hard that soon they were just a mess of tangled blonde hair flopping about the stage.

Most of us who attended probably didn’t see the entire show. Folks kept taking turns heading outside to cool off and dry out. But after a few moments to catch their breathes, it was back to work for the music lovers. They kept the party rolling nice and hard. A dance party of this magnitude was the reward for those who made it through all that humidity.

Next post Album Review: Spirit is the Spirit - Mother Mountain