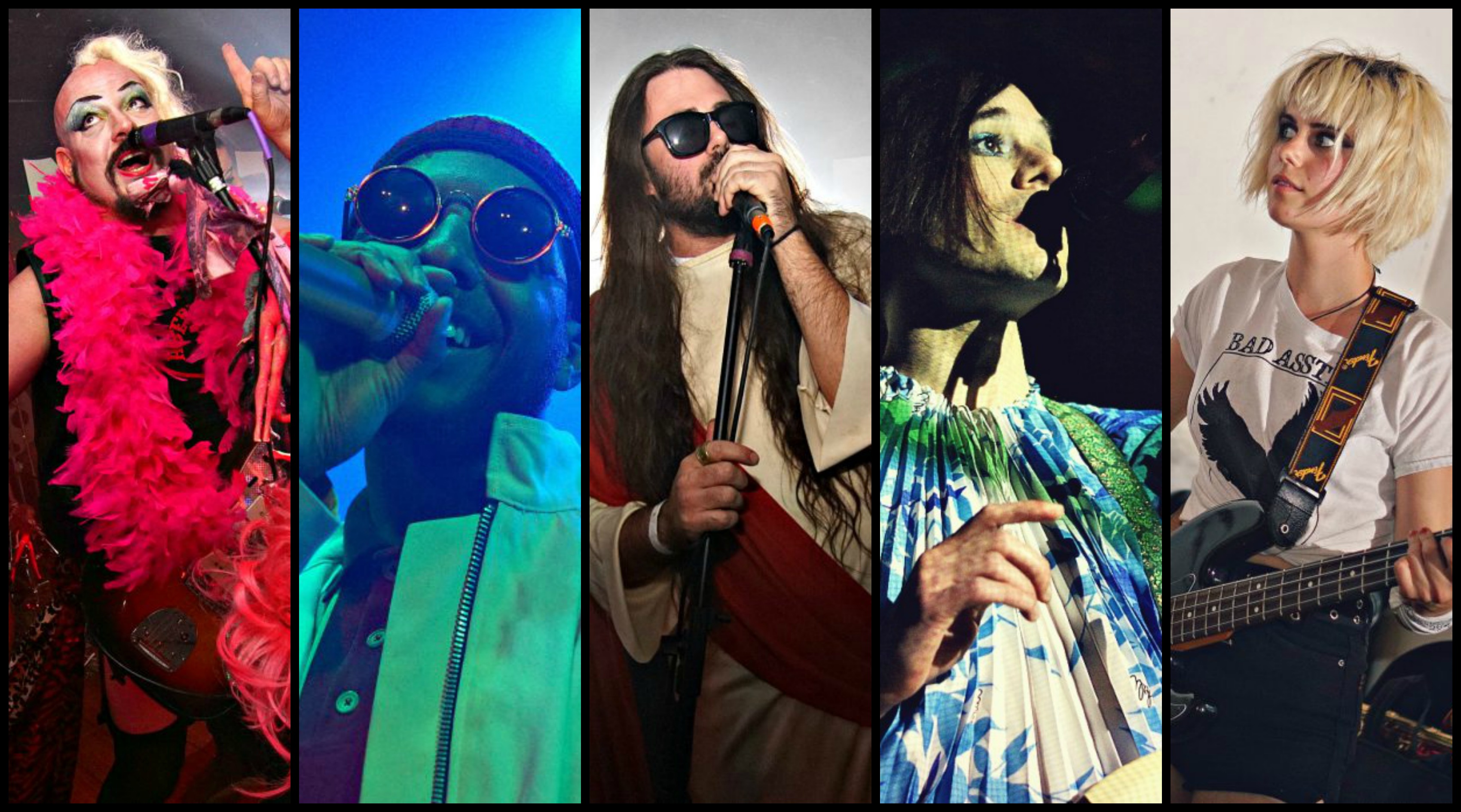 Hoo-boy. This one’s going to be a doozy.

Generally, Halloween is full of shenanigans in the live music scene. But with the popular holiday falling on a Wednesday this year, most venues are opting to throw darn hard the weekend before. To help you navigate the tricks, the treats, and the tom-foolery, here’s a look at the best Halloween shows lined up for the week.

In what is arguably one of the biggest events of the season, the Replay is celebrating its 25th anniversary with a three-day extravaganza. The music starts earl on Friday with a matinee, continues through Saturday, and ends with a DJ comedown on Sunday. Though the weekend comes with a higher-than-usual ticket price for the venue ($5 for early shows, $15 for night shows), fans will likely be treated to rare performances from bands that don’t appear too often anymore, as well as a slew of photos and memories of years past. Bands include Cloud Dog (Friday matinee), The Appleseed Cast (Friday late show), Mouthbreathers (Saturday late show), and a slew of DJs rocking the patio every night. You can find a schedule of the bands below, and see more detail about the events over on the Replay’s Facebook page:

This is the show you’ll want to see if you’re under 21 or uneasy about wading through the madness of Downtown. White Schoolhouse has spent the last year building a reputation as a haven for underage bands and their fans, and this weekend will be no exception. Indie rockers Night Class headlines the night, but two exciting new garage acts open up the show. The Arsonists and Mudd Club both feature teen rockers who are wise beyond their years in terms of stage presence and punk-rock know-how. This is a must-see show to start off your weekend and, if nothing else, it will completely restore your faith in the future of live music in this town.

Khrystal is an R&B darling in the local scene, and she’ll co-headlining this event at Gaslight Gardens with popular Kansas City rapper They Call Me Sauce. This will be a night of good vibes and smooth beats on the patio under the lights. Come bundled up and ready for this affair in North Lawrence. 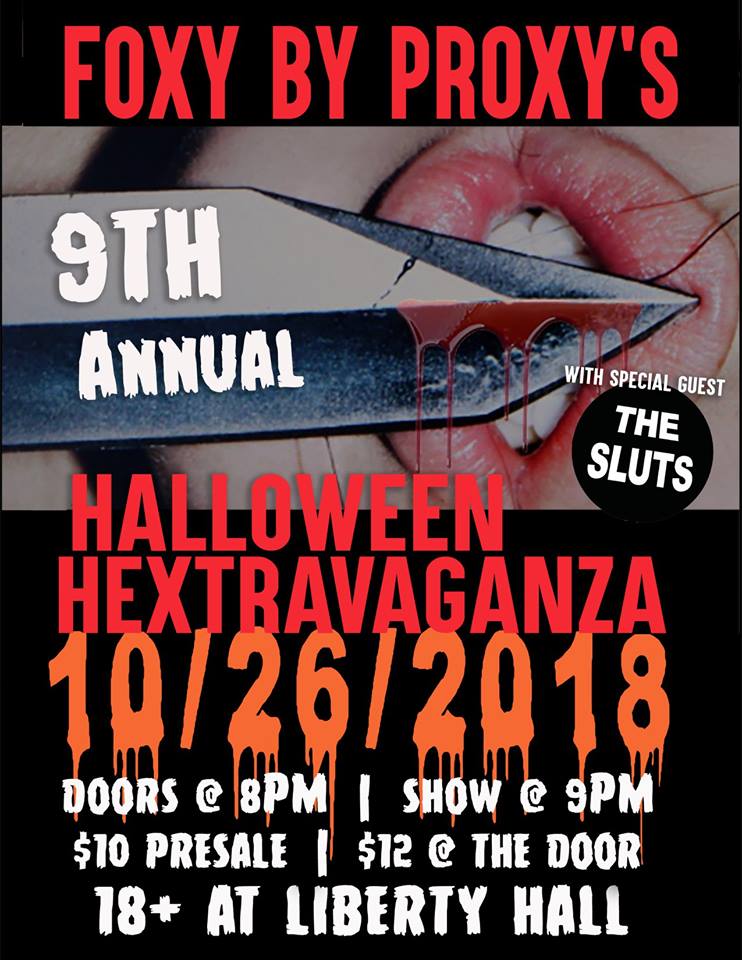 Now normally we stick to strictly music events on this site, but local burlesque troupe Foxy by Proxy has a special event this Halloween weekend geared towards the local music community.

Local rowdy meatheads The Sluts will be performing as part of the dancers’ annual Halloween throwdown at Liberty Hall. We’re also told that some performers will be dancing to music provided by local bands. We won’t disclose that just yet so you can enjoy the surprise. This is the 9th year for the event, and it will likely fullfill both your desires and nightmares. Strap in (or on). It’s going to be one wild ride.

Frank’s has two shows this weekend, but this seems to be the only one that’s Halloween themed. Costumes are encouraged for this show, headlined by Lawrence’s Amore Et Bellum. Oh Dear Oh My are a quirky, two-piece that tend to win audiences over right away (think Schwervon!). Considering Amore Et Bellum describes themselves as “diverse and enthralling alt-rock witchcraft hailing from the rolling plains of Kansas,” this will not disappoint those seeking out Halloween festivities with all the privacy of a a venue a little off the map. 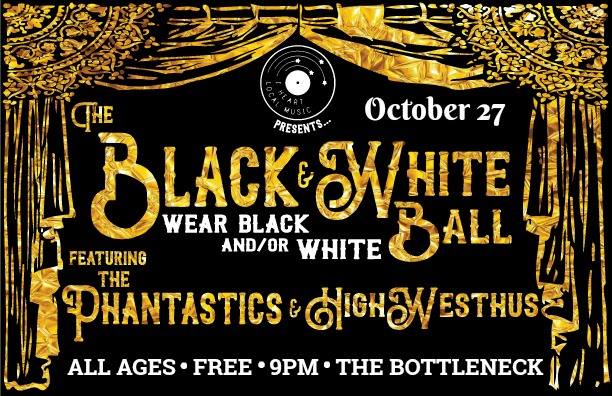 I Heart Local Music Presents: THE BLACK AND WHITE BALL FEATURING THE PHANTASTICS AND HIGHWESTHUS
The Bottleneck

If we may indulge in a little shameless self-promotion for a bit… It’s time to get FANCY.

I Heart Local Music is throwing a Black and White Ball! Attendees are asked to wear black and/or white and cut a rug all night long with The Phantastics and HighWesthus! This is a fancy affair, and we will be all glitzed up for it. We will be awarding prizes for the best dressed, so it’s best to get gussied up big time for this shindig. Winners will receive a themed crown and tickets to see Of Montreal on Halloween!

The Phantastics are a seven member band from Kansas City specializing in tantalizing, genre-blending dance floor activators. In 2015, the music group was crowned “Kansas City’s best party band” by the Kansas City Star. But “party” doesn’t encompass the range in which The Phantastics reign. Musicianship and diversity are at the core of their success. Expect to hear Rock, Rap, Dance, Funk, Jazz and Soul all incorporated into a seamless, winding river of music. “The band that can do it all”, according to I Heart Local Music, has shared the stage with some of music’s most legendary acts including George Clinton and the Parliament Funkadelic.

I Heart Local Music has dubbed HighWesthus one of the most danceable acts in the area. From start to finish, this is a high-octane performance that never once slows down. HighWesthus mixes classic sounds with stylish and modern lyrics, and his stage presence is a step away from the norm with local hip-hop shows. The energy that comes out of this guy is unmatched.

Revelers at The Jazzhaus will be dividing their Saturday between two shows. The evening starts early with a spooky surf party when Kaw Tikis hit the stage with their surf rock, while the late night belongs to SUNU’s funk and soul costume party.

The Gaslight delivers for two nights in a row, with Saturday conjuring up Halloween Havoc from Lazy Waters. The spooktacular party will also feature dance music from DJ Lazy Slaughters. The band says dancing, costumes, and howling at the moon are encouraged.

This is perhaps the most exciting of all the Halloween events, simply because Of Montreal is the perfect band to play the holiday.

There’s a lot going on when Of Montreal hits the stage. Every song is peppered with extravagant costumes and a little roughhousing onstage. We’ve seen angels flapping enormous wings, boxing poodles, and lots of big old (costumed) titties.

Of Montreal is no stranger to theatrics, and Wednesday’s show will be no exception. Considering local glam rockers Vibralux will be opening the show with their costumed antics as well, expect to see thrilling displays of gender fluidity and melodramatic stagecraft (and if we’re lucky, a little witchcraft).

DJ Kimbarely Legal is set to keep the dance party going all night long once the band ends their set. Of Montreal’s Kevin Barnes has been known to make appearances at the DJ table, so keep an eye out for him popping in and around the night’s festivities.

Night Stories / Jason Steady / JC and the Nuns
The Replay

After recovering from their weekend-long anniversary celebrations, The Replay will suit up and get back at it for Halloween. Night Stories and Jason Steady will stop by on their tours for the antics, with the night kicking off with JC and the Nuns (spoiler alert, they’re already in costume).