“A Reflection of Me:” When motherhood and making music match up 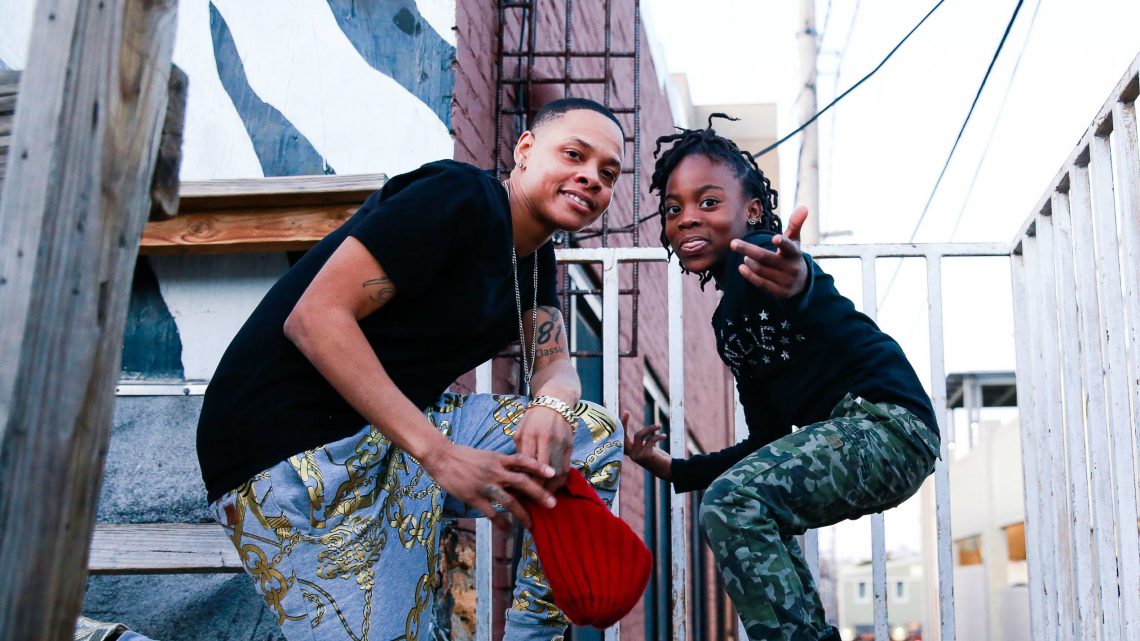 Managing a band can be a lot like managing a family. You’ve gotta get everyone from point A to point B for important events, present them at their best, make sure they’re getting along… and in some cases, make sure they’re fed. The lines can get blurry, but the local Lawrence and Kansas City scene’s moms have this down on lock. This Mother’s Day, meet some of the busiest and hardest-working mommas nailing their roles on and off the stage: 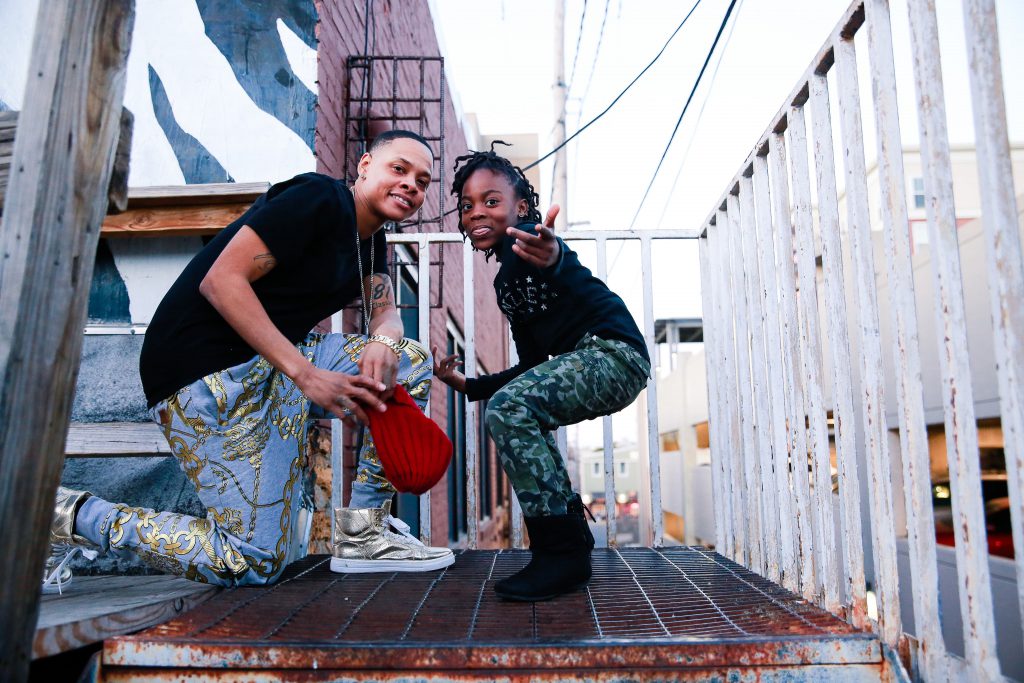 “Music is a part of our day-to-day life, from house work to car rides. At times you’ll even find us using song to communicate our wants and needs to each other, or just in having general conversation. In addition, my daughter is very much involved in my creative process, she’s my youthful ear. It’s to a point now where I’ve found that the songs that immediately grab her attention are the songs that do the best amongst the crowds I play to. Just this morning she told me that the beat I was writing to last night, when she was supposed to be sleeping of course, was a good song.

Lakenzie is also featured on the intro, “Concentrate” of my latest EP ‘We, The People’ (which you can find on all major streaming distribution channels) and when she’s up for it, she performs at the ‘all ages’ events that I play with me. She likes to promote ‘our song,’ as she calls it, to everyone as often as possible. She is now in the early stages of exploring and understanding her own voice and how it works best for her as well as starting to understand how sounds and cadences work and wanting to write her own material.” 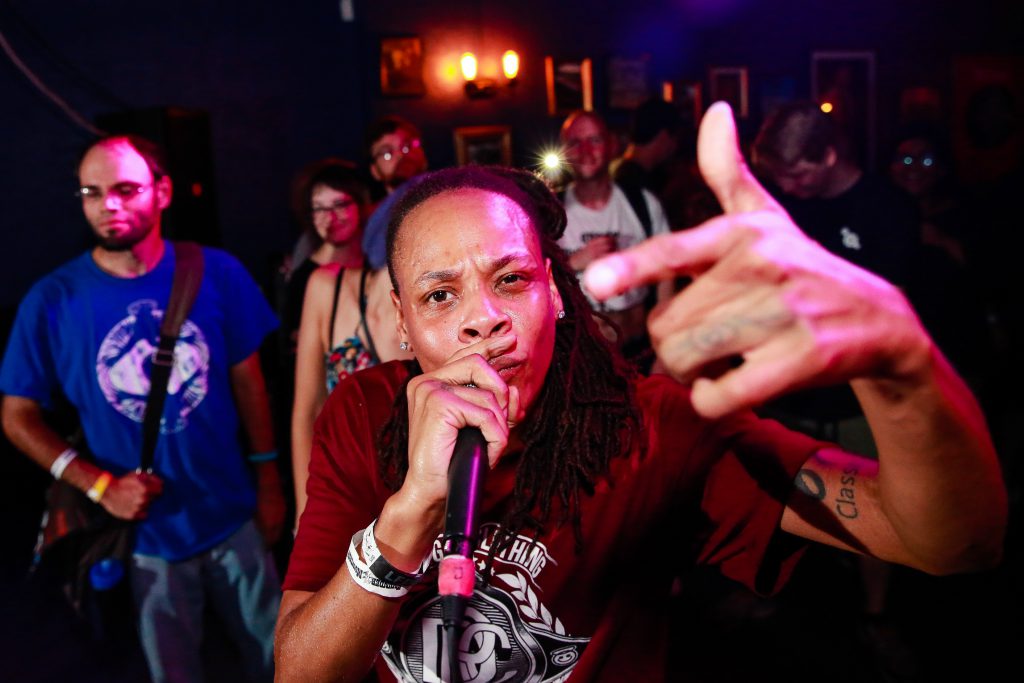 “Balance. Balance and organization is key.”

“It’s easy to say what can or can’t be done, when you’ve never done it.”

“That my music is my truth and my passion…. A reflection of me.” 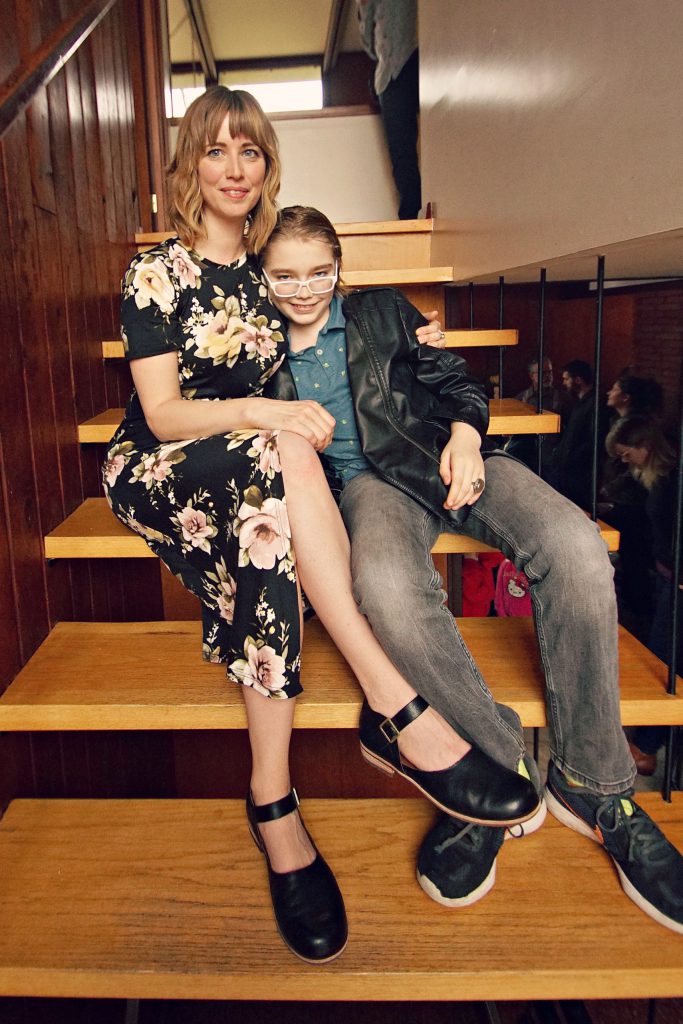 Heidi Gluck and her son Ollie / Photo by Fally Afani

“Ollie likes to figure out his favorite songs on the piano or violin. My favorite is when he’s in the mood to sing, and I’ll accompany him on the piano while he belts out Steven Universe songs. It’s the best. He also gives me feedback on my recordings. Ollie also has great ideas about songs, mashups, and parodies. He’s always inspired, which is inspiring.”

“A commitment to making stuff. It would make my life much easier to just stop. Easy’s no fun, though.
A well-managed calendar. A support system that includes caregivers willing to accommodate an erratic schedule.” 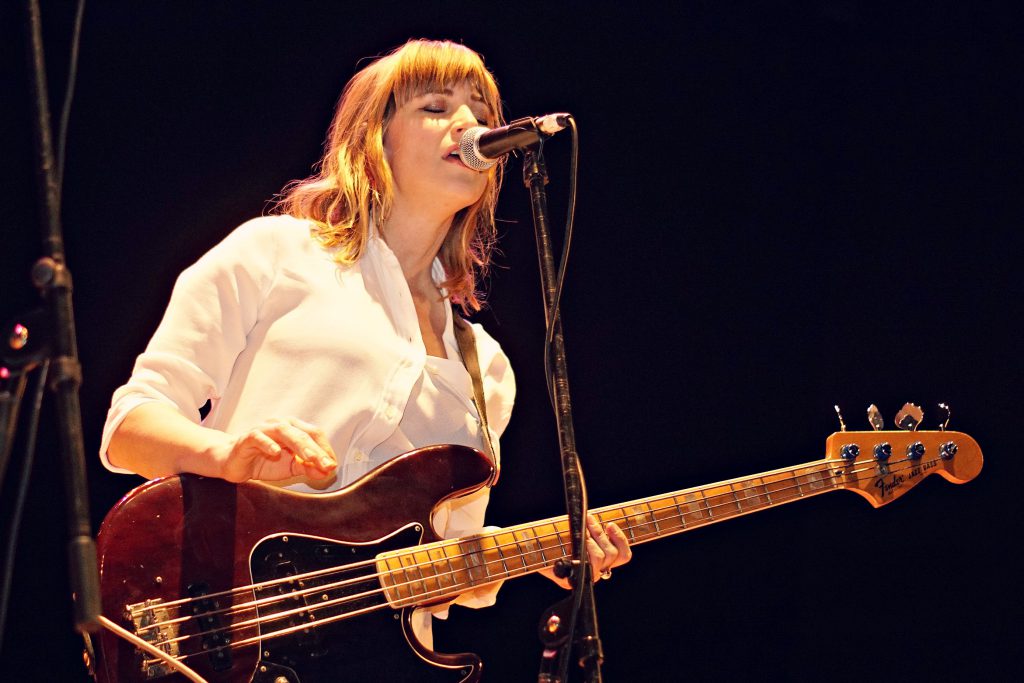 “I don’t hear from many naysayers. I sometimes sense judgement when it comes to late nights or being gone for sessions or tours, and I bring up that being a night nurse or a traveling business-person would be just as challenging for child-rearing. Also, I’d reply ‘When is the last time you asked a dad that?'”

“I want him to remember that creativity is something I always made time for. I want my voice to continue to be a comfort for him as we both grow old.” 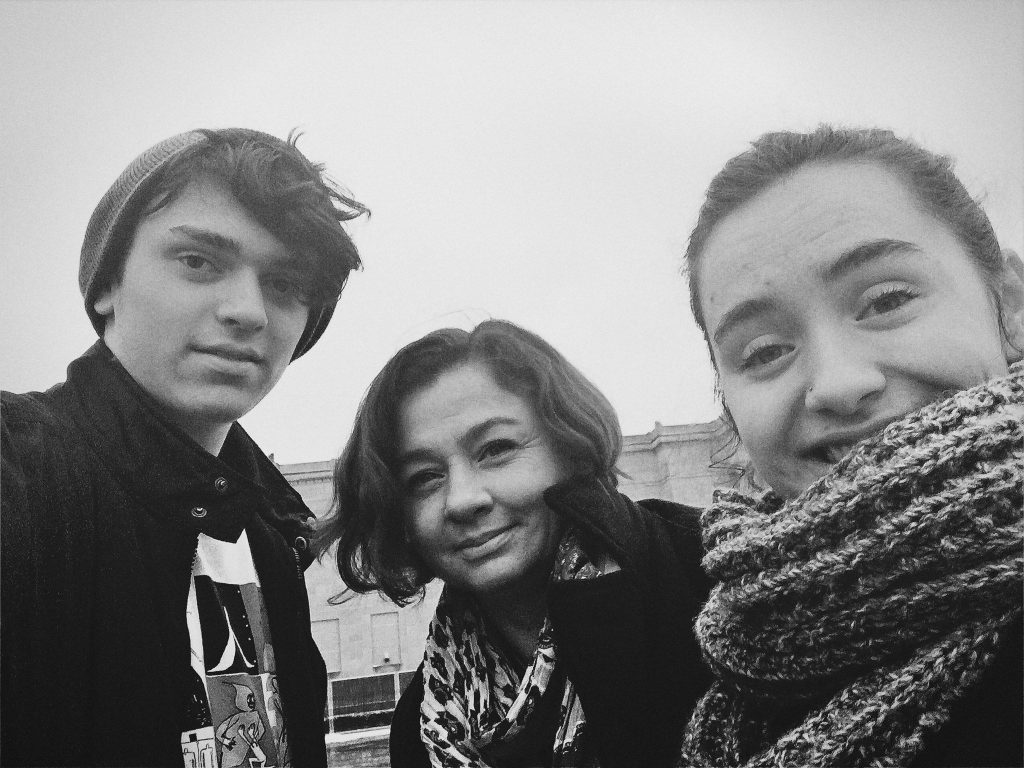 Heather Lofflin of Vedettes with Zac and Harper

“So far, we haven’t played together, but music was all around them. I mean – I was seven or eight months pregnant with Harper when the band I was in opened for Melvins at Granada, which made her completely freak out in utero, so there’s that. When they were children, they liked to sing along to PJ Harvey in the car. I’d play my acoustic guitar and sing as I walked around the house while they played. During the afternoon, I’d play heavy music to rock them to sleep for naps (literally, Sleep). When they were a bit older, they would hear band practice coming from the basement; I had a baby monitor, and we’d stop to listen for any sounds of distress between songs (the band was just laughing about this recently because we realized the monitor is still hanging on the same nail from 15 years ago).

Harper plays clarinet, oboe, guitar, piano, and sings. Zac plays violin and piano. I’m planning on recording one or two solo songs this summer at the library, and I’m hoping Zac will play violin on them. Harper has started turning me onto music– she just told me about Big Brave, which I love, and I think she might be starting a band in Minneapolis. Zac recorded noise music with some friends, which I don’t necessarily get, but that’s fine.” 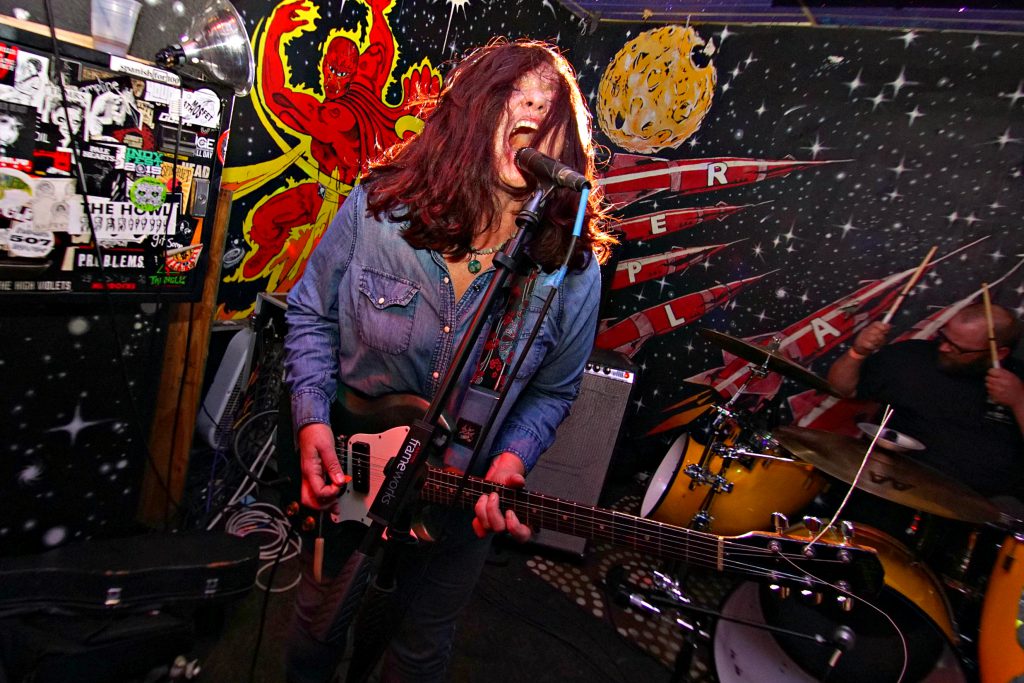 “Well, both of my kids are essentially launched, so I guess I’ve got the long-range perspective. First, support. You’re going to be up late, but the kids will keep their same schedule. It’s important to have some people in place who you trust to be able to babysit. Second, patience. When you become a mother, life changes drastically. You have to allow yourself to take the time to acclimate to your new reality. It’s OK to take a break from playing – it doesn’t mean you won’t ever do it again. Third, balance. Don’t let your kids take your music, and don’t let your music take your kids. Be “present” in both situations.

Finally, I’m not a huge fan of taking kids to shows. I don’t think bars are places for children, even at six in the evening, and truthfully, it’s awkward for everyone. I took my kids to a few afternoon Replay shows back in the day, and I was stressed, and they were miserable. Having parents in rock bands, as it turns out, is real boring.”

“Is that a thing? If it is, it’s ridiculous. I’ve never had anyone criticize me for doing both. What is there to criticize? I can’t think of the counterargument because I don’t know the argument against it. This really happens? I’m glad nobody said anything like this to me. They’d be in a world of verbal hurt. I take my responsibilities seriously, and I’ve earned the right to do what I want to do. End of story.”

“I suppose I would want them to remember that I did it, and kept doing it, and that everything I did was in search of my authentic self. The music itself – I don’t think it’s really their thing, so I don’t worry so much about them remembering the tunes. More along the lines of, Momma was this quirky lady who insisted on doing her own thing when she really should probably have been scrapbooking, or gardening, or cleaning house. Kiddos – this is why the house was never spotless and you had to do your own laundry – too many other things to do – and I stand by that decision.” 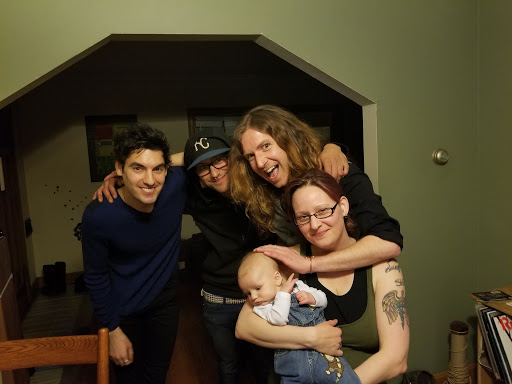 Wick and the Tricks and Baby Parker

“I never took a break from practicing or playing shows while I was pregnant. So my baby listened to the band a lot, even before he was born! Now that he’s on the outside I play my band’s recordings for him. We also listen to just about every genre of music there is together. I enjoy seeing how Parker reacts to different tunes. I dance and sing with him every day. I look forward to the day that he brings new music to me!”

“The same things that are essential for anyone: You only get to live once, strive for balance in how you spend your valuable time. Prioritize the things/people that are most important to you. Remember to have fun!” 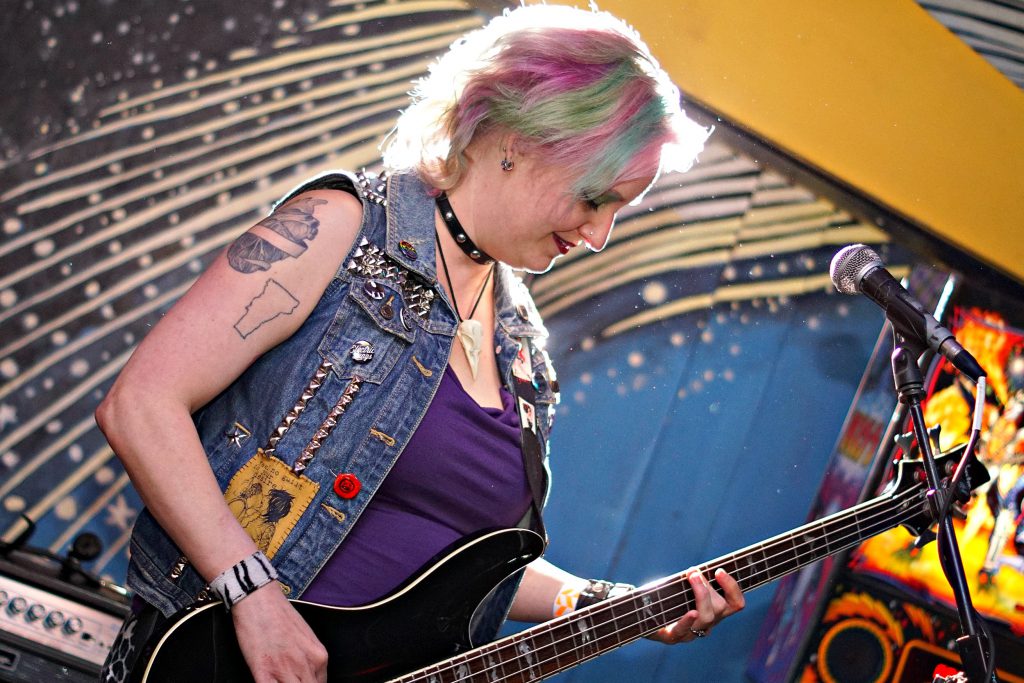 Jane of Wick and the Tricks / Photo by Fally Afani

“This criticism of mothers is an extension of patriarchy. Mothers are criticized specifically for spending time on anything that is not directly childcare. As though being a mother should mean that you cease to have your own desires, goals, and activities. I think that a child growing up seeing their mother following her own passions and taking time for her own desires can only help that child learn to respect women as individuals rather than seeing them as subservient. Motherhood is largely about teaching. I can think of no better lesson to give my child than respect for the agency of others and to chip away at the patriarchy a little bit more.”

“That we stood up for what we believe in and had a hell of a good time while we did it!”