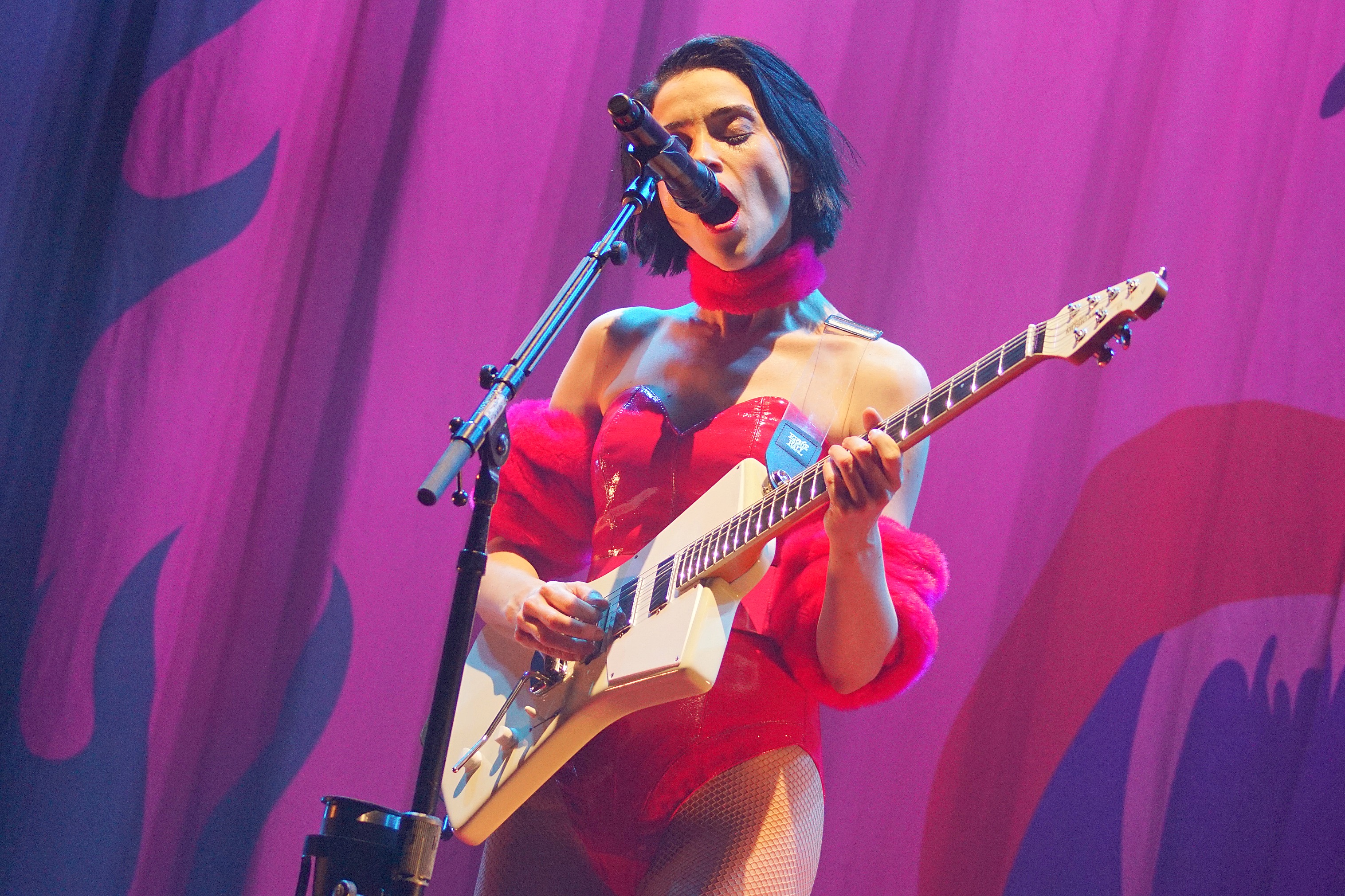 St. Vincent has a tendency to keep her audience on her toes. Years ago, she performed with a small band onstage at Liberty Hall. When she returned to the Hall three years later, she brought along an entirely different act full of choreography and a wild light show. On Sunday night, Annie Clark was once again full of surprises as she pulled off the most interesting one-woman show we’ve seen on that stage.

The night was divided into three acts. The first act featured a screening of “The Birthday Party,” Clark’s directing debut. The short film centered around a young girl’s birthday party that goes awry after a sudden death– yet moments in the horror film had the audience chuckling thanks to interesting characters and the oddly-relatable demeanor of the film’s main actress, Melanie Lynskey.

After a brief intermission, she emerged for the second act. Clad head-to-toe in a hot pink getup with thigh-highs to match, she stood solo in the spotlight just in front of a curtain. Needing little more than her prodigious guitar talents, she went on the perform the rest of the show with nothing more than her signature Ernie Ball guitars. She spent the entire second act waltzing from one end of the stage to the other, stopping at each mic to perform songs from her lengthy repertoire (her high-pitched rendition of “Cruel” was an especially thrilling experience for the crowd).

After another brief intermission that lasted just a handful of minutes, she remerged for the third and final act in a shining silver sci-fi affair. The screen behind her projected images while she wailed away. Clark has always sported a dramatic gaze from the stage, making intense eyes at the crowd while shredding away. The frenzied strobes and saturated lights were a stark contrast from her stoic and commanding stature, though she did occasionally step away from the mic to headbang over those to-DIE-for guitar solos.

With every album in St. Vincent’s discography becoming progressively dancier, it was a grand pleasure to watch how her fans have consumed her live show. In the past, we’ve seen them stand absolutely still in open-mouth astonishment over her fast fingers on the fret. But on Sunday, numbers off the recently released (and deeply personal) Masseduction conjured up little dance parties within the crowd (with clap-alongs peppered throughout).

Despite every tour bringing something new and different to the table, there is one binding trait– Clark sets the bar high for any good guitar-worshiping fan. Even the local musicians we spotted at the show were the ones we consider some of the best guitarists in the scene (Katy Guillen, Jorge Arana, and Meredith McGrade). St. Vincent shows are not for the weak, as she consistently delivers the awe-inspiring, quality guitar-rock so many acts tend to lazily set on cruise these days… and she delivered this lesson in the exceptional without a single soul accompanying her onstage. Take notes, because this is how St. Vincent just schooled everyone.