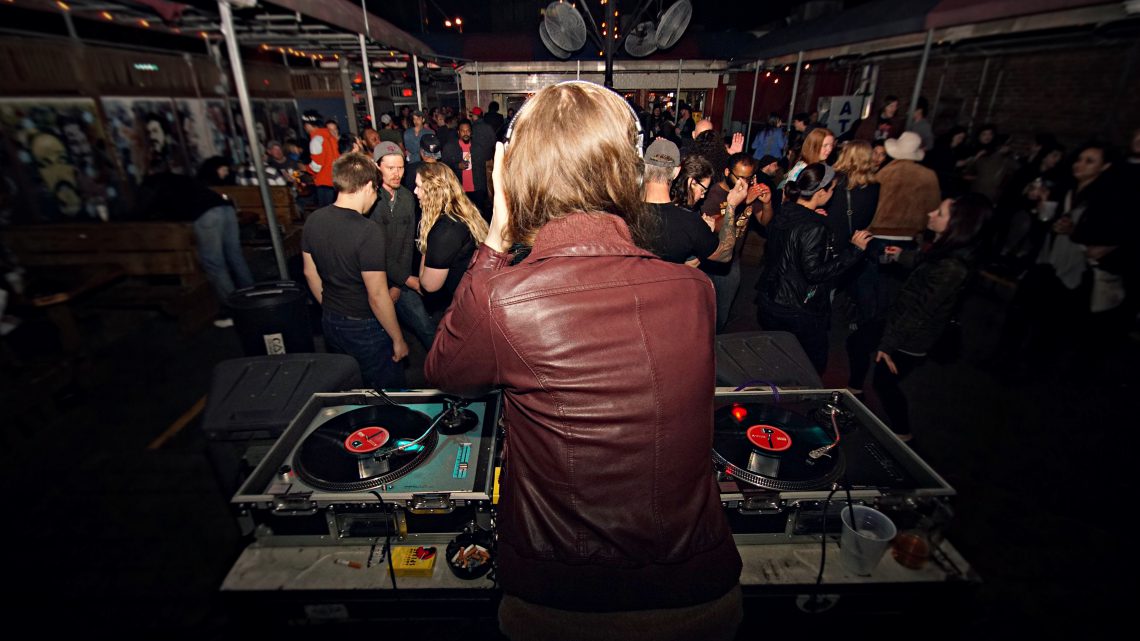 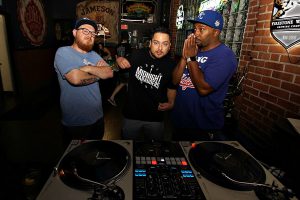 When you hit the streets of Downtown Lawrence on any Friday evening, that’s when you’ll hear it. A sound luring in scenesters, beckoning them to indulge in a night of regalement. We’re talking about that moment when the DJs fire up their sets, blasting every danceable tune they know into the night air. It could come wafting through the air from the outdoor stage of the Replay, or thundering below in the booming basement of the Taproom. No matter the location, the DJs in Lawrence hold it down— and if you’ve ever boogied, hustled, shimmied, and gotten down, you have them to thank.

The DJs in Lawrence tend to have a fairly successful presence here, luring in large crowds with their scratch skills and ears for good beats. This is perhaps why a trio of Lawrence DJs— DJ G Train, Johnny Quest, and DJ Proof— who go by “Midnight Marauders” will be opening for Public Enemy this weekend. The event is a free street party and is likely to bring all the movers and shakers out. We’d like to introduce you to the Marauders below, as well as some of Lawrence’s most beloved DJs. There are many more than the ones on this list (word is there will also be a monthly queer DJ night happening soon, stay tuned). If you’d like to get acquainted with them, we suggest heading to your nearest dance floor this weekend. 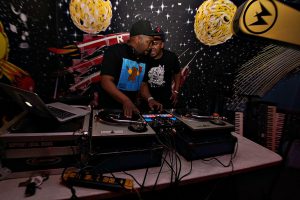 Why did you get into this?
“It’s hard to say why I got into DJing, it was something that was fun to do with my free time and just kinda turned into a paying job over time.”
What’s essential to being a DJ in Lawrence?
“Whatever you need to make a connection with the crowd you’re playing music for.” 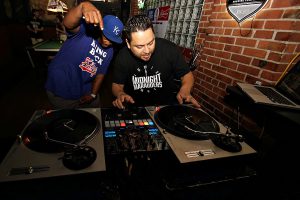 AKA: Ian Thomas Sotomayor
Spins: Party rocking get up music.  Funk, Soul, Classic Hip Hop, Electro, Retro, Reggae, Rare Groove, Tejano, Latino and more.
Where you can find him: The Replay Lounge on the second Friday of every month, The Taproom on the fourth Friday of every month, wedding reception, beer expo’s, and occasional opening spots at local venue’s. In the past, Fatso’s on and off since 2000.

Why did you get into this?
“I grew up in the ‘Yo Mtv Raps’ golden era of hip hop. I fell into DJing by accident. A girl I used to see told the Spanish teacher that I could DJ the annual Spanish Club dance. I teamed up with a friend of mine, Chris Long, and we rented equipment, did the dance and it was a success. This is my sophomore year of high school. Student Council gave us the end of the year dance, it went off. That summer a local DJ called me up and asked if I would like to work for him. In the fall of 1992 we formed Sound Syndicate and I’ve been playing car shows, fiestas, receptions, school dances, clubs, and wherever else that I could ever since. Love of music led to this, the challenge of being on time and creating new and exciting mixes of new and old favorites kept me going. Learning to craft cuts and blends and season my mixes with different types of tracks has always been a welcomed challenge as well. It’s an amazing feeling to guide an audience through peaks and valleys of music and have people tell you that they dig it.  Primarily, I do it to challenge myself and be better than I was the day before. Djing for me, it’s an artistic outlet.  I can express myself through my mixes and my pallet of music and sounds is limitless.”

What’s essential to being a DJ in Lawrence?

“Lawrence has always had a strong roster of real record playing, beat digging and DJ battling DJs. It was one of the reasons I moved here and a big part of why I stayed. Competition makes you better. Before the internet, shows and battles where such giant learning and entertainment experiences and Lawrence had all the hot show. I drove three hours to see De La, Pharcyde, Run DMC, DMC DJ battles, Flavor Pak battles, I had to end up just moving here. Audiences in Lawrence are knowledgeable and appreciative. I like to call this place home and I love to DJ and drive two or three blocks and be home. It’s real.” 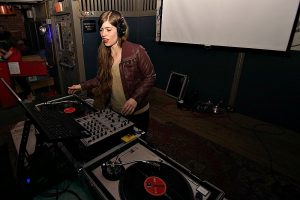 AKA: Kimberly Simonetti
Spins: Funk, Afrobeat, hip hop and International club
Where you can find her: 3rd Fridays at The Replay, March through November
Why did you get into this?
“I got into DJing through dancing. I used to go to NEON to dance and it was personally transformative. From there, I got into dance music culture and I wanted to try DJing for myself. I learned from a friend’s brother who was an engineer and KJHK DJ. He showed me the ropes, and soon I was playing house parties for my first few gigs. From there, I got my first official club gig, at The Replay Lounge, and I have had a DJ night there ever since.” 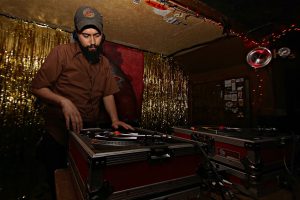 AKA: Chetan Michie
Spins: Soul and funk
Where you can find him: The Taproom and The Replay.

Why did you get into this?
“Originally I started DJing after working with DJ Konsept (Edwin Morales) on his production company, Downplay. One random Sunday, at the Gaslight, I was tipsy enough to ask him to show me the ropes. Initially, I was playing on borrowed decks and mixers, and spinning all my old punk and Ska records underneath the name DJ Leatherface. Then, I went to my first Gold Label Soul at Taproom back when Sarah Broken Leg (Sadie Soul) and Jacob were first starting…well, the music hit me hard, and I found my genre. Fast forward through Guest DJ spots with her, she moved to South Dakota, leaving me with my now resident DJ position in Gold Label. 10 plus years running since she started it!” 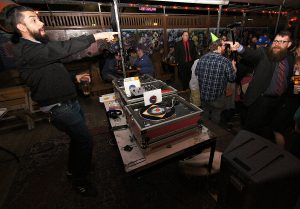 What’s essential to being a DJ in Lawrence?
“Knowing your venue and crowd. You can’t shove songs down people’s throats just because you feel it’s the best thing you’ve heard. If you see the crowd screech to a halt, you’re doing something wrong. Also, being kind, constructive, enthusiastic, and motivated go a long way. No one likes to see a DJ yawn or looking bored, let alone a grumpy attitude when you’re approached at the booth. Be kind with your venues. They’re helping you make money, you’re helping them. Doesn’t matter how good you are if you have a bad attitude when payout comes around. Respecting the position is huge too. Don’t be that iPod DJ who thinks they’re amazing even though they’ve never manually mixed a record in their life, let alone spent the hours digging for gems. Finally. Don’t be a snob. That’s kind of a universal truth, but no one cares how much a record costs while they’re dancing off four whiskey cokes.” 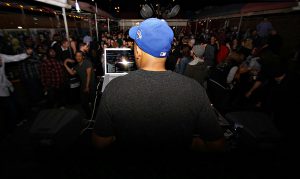 AKA: Sean Hunt
Spins: Hip Hop, Funk, Soul, Pop and Lounge.
Where you can find him: The Replay Patio Stage every second Saturday of the month.

Why did you get into this?
“I am a record collector, music producer and a hip hop artist so, finding tunes to make people groove is part of the job. I don’t consider myself a DJ in the technical sense (that takes hours, months, years of dedication), I am more of a sound selector or a vibe provider. I more or less set a mood.” 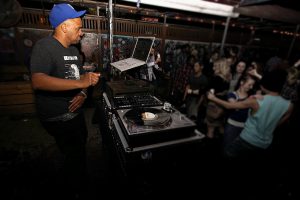 What’s essential to being a DJ in Lawrence?
“To be an actual DJ you need to put the practice hours in, understand the roots of the craft and the history. There are plenty of programs that can allow you to put a playlist together but a true DJ has a vast knowledge of MUSIC and the chops to take you on a entertaining ride. What do I know, I am NO DJ.” 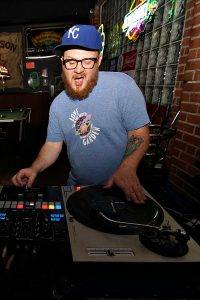 AKA:John McCluskey
Spins: Open format/Hip Hop
Where you can find him: The Replay, Dempsey’s

Why did you get into this?
“I have wanted to DJ since I was a kid. Its a combination of my two favorite things, music and technology. And I am fortunate that I get to share that with people.”

What’s essential to being a DJ in Lawrence?
“Open mind and deep crates.”

Next post Photo Gallery: Easy Fruit / Schwervon! / Karen Meat and the Computer / Something and the Whatevers