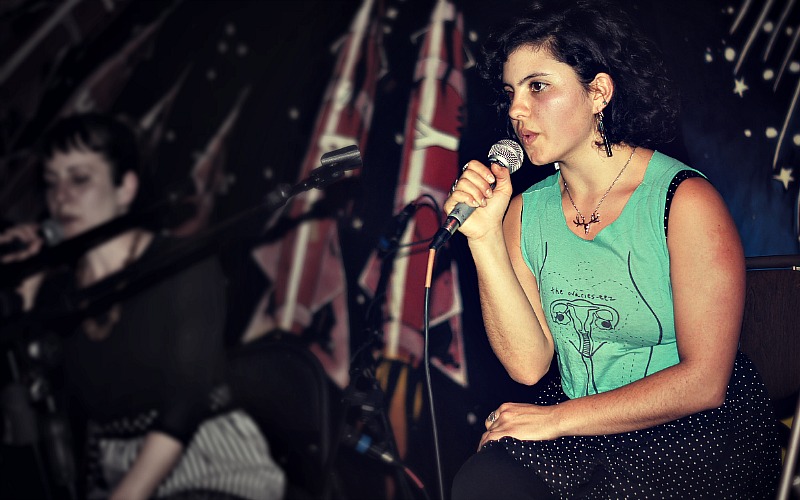 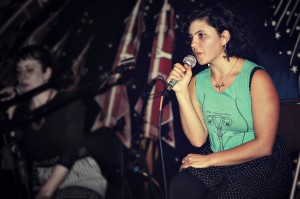 Women ruled the Replay stage on Friday night as part of a fundraiser to bring Girls Rock Camp to Lawrence. The night featured the stunningly wide array of female Lawrence performers ranging from the dainty to the nitty gritty (we’re looking at you, The Bad Ideas).

The night began with a swoon-worthy set from The Ovaries-eez. If their likable puny name didn’t win you over, their attitude did. We like to joke that this is the type of band you’d see in the feminist bookstore on Portlandia. Amber Hansen, Johni Lacore, and Monica George perfect the art of simplicity to convey female-centered themes, such as motherhood.

The three sirens who constantly harmonize over a softly strumming guitar. Very rarely do they stray from this style, although for a couple of songs they bust out the kick drum and pound away at a driving folk tune or two. After one song that featured the kick drum, they joked “That’s probably as hardcore as we get. We have a distortion pedal, but we don’t use it.” The rest of their time is spent softly crooning and gently swaying in their seats.

Here are a couple of clips from their Friday night performance, including one featuring that exciting kick drum!

Right now Girls Rock Lawrence needs lots of volunteers and donations. This is an extraordinary event that provides “a safe space for adolescent girls to participate in music education and mutual empowerment through Lawrence.” You can help by teaching a class, donating gear (this is something dudes can provide for the camp), or working to promote the camp, which runs the first week of June. For all information, including how to contact Girls Rock Lawrence, click here.