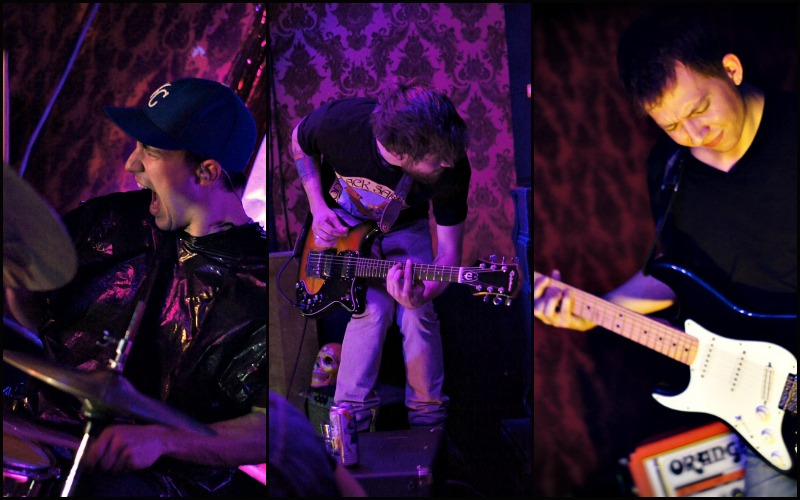 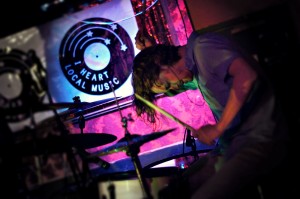 Thursday night was a Stop Day Eve to remember at the Jackpot. I Heart Local Music threw an event for the students to celebrate the end of classes, and they partied in full force thanks to vigorous sets from Psychic Heat, Middle Twin, and Forrester.

Forrester has been hot shit ever since their EP came out. It takes a lot to get an entire scene so fond of you when you don’t have any lyrics or vocals in your music, and Forrester exceeds at this perfectly. They’re so lively and animated onstage, that sometimes their feet never touch the ground. It’s pretty common to see them flip flopping all over the place, and this set the tone for the night. 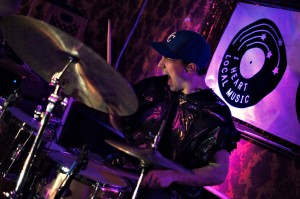 Middle Twin are just sprightly as can be anymore. But don’t let their breezy demeanor deceive you. These studs can throw down hard and are especially good at keeping a party going hard. They better be, considering they’re turning out to be one of the hottest and most sought after dance bands in Lawrence and Kansas City. They impressed the audiences not only with spot-on vocals but an array of tricks produced with electronic sounds. Nobody really knows why they all donned trash bags on this night, but they insisted on getting “trashed” with the audience. Like Forrester, Middle Twin also recently released an EP, and are on their way to becoming the go-to party procurers of Lawrence. 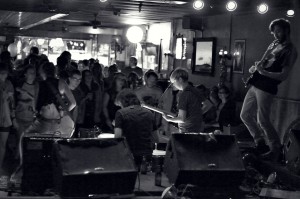 It’s really hard to believe that Psychic Heat can up the ante on their live shows, but on Thursday night they managed to do just that. They ditched the stage for an aggressive, hot-blooded set on the floor. This really got the crowd excited, and they were more than willing to rock out and thrust about with the band. This set is where the band just became a ball of fire. They climbed monitors, broke strings, threw themselves into the crowd, and scooted all over. But not the drummer. No, that sonofabitch stayed firmly planted with a menacing posture and a cold-hard stare that cut like a knife. He was the rock, the anchor that allowed his bandmates to go bat-shit crazy and experiment with madness.

And once the madness was over, the audience spilled into the street like an impotent mob with smiles drunkenly slapped across their mugs. After a vicious rock show full of drunken debauchery, you’d have thought it was the weekend and not a Thursday.