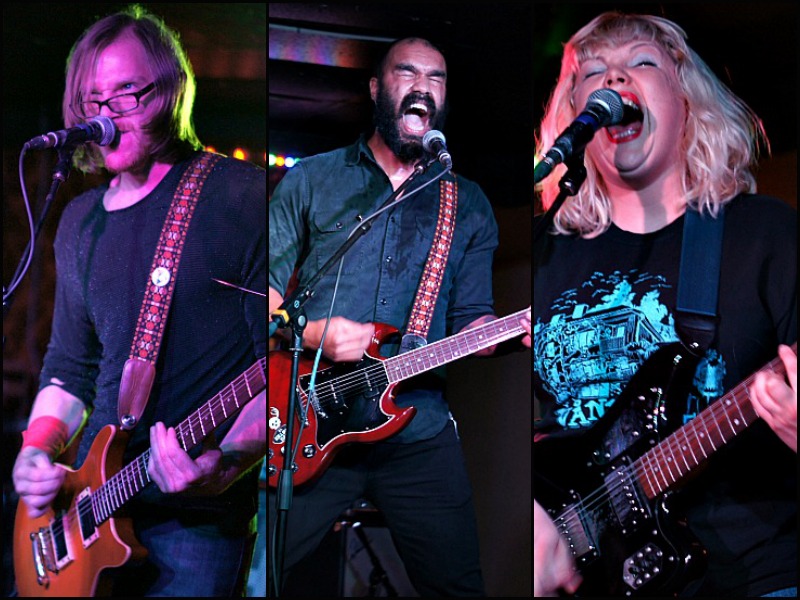 If you’ve been wondering what happened to fun in this town, it was alive and well at the Jackpot on Saturday night. I Heart Local Music hosted the first of what we hope will be monthly showcases with the goal of getting Lawrencians familiar with some of the best bands in the area. July was the inaugural month, and we called upon the talents of The Sluts, Bruiser Queen, and Black on Black for an unforgettable night of loud music and vivid lights. 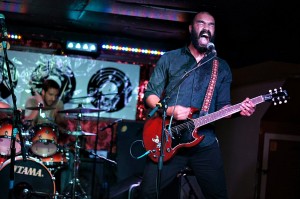 Black on Black’s set was particularly exciting because the band has very steadily been creating a buzz thanks to the rawness and aggressiveness of their live shows. Word has been spreading like mad about this band, and on Saturday night they delivered. Hard.

Black on Black has an ever-intense stage presence that only gets more intimidating with each set. The band is becoming so comfortable with their music (while constantly writing new songs as well), that even the physicality of their performance is catching everyone’s attention. Black on Black scored new fans on the spot on Saturday, and we heard a lot of exciting whispers and chatter in the crowd. One new fan even turned to us and said “This is the most legit band I’ve heard… like modern punk!”

Note: We’ve posted a clip of the following song before, but it was so impressive on Saturday we thought we’d post it again.. 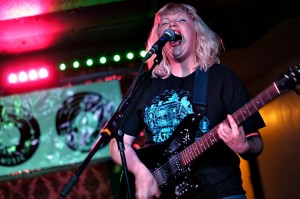 Before anyone had time to recover from Black on Black’s stage assault, Bruiser Queen swooped right in, packing a punch from the get go. This band is really just barrels of fun. It takes a lot for an out-of-state band that nobody is really familiar with to leave a lasting impression like the one Bruiser Queen left on Saturday.

Their songs are powerful and dizzying at the same time, the kind of rock that’s fun to get drunk off of. We can’t decide what’s more impressive, Morgan Nusbaum’s impressive guitar skills or her killer voice. Those vocals simultaneously tug at your heartstrings and knock you off your feet at the same time. They jump from sentimental to destructive in the blink of an eye, and are a perfect match for those impeccably written songs. 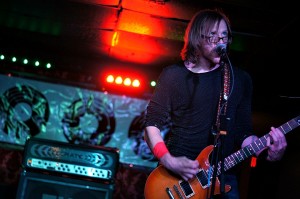 There’s no better way to feel alive than watching The Sluts. Their songs are contagious, and Saturday night’s set had fans singing along not only to the vocals, but sounding out the guitar parts as well. These are vicious works of art, swollen with the most ill-tempered lyrics (frontman Ryan Wise has started flipping the bird during “I Want You To Die”), yet they still had folks dancing and ripping it up on the floor.

The Sluts have more music than they know what to do with. Every set comes with new songs that have the fans going nuts, and with each new song comes an even catchier chorus. The Sluts might be the best unsigned band in the area, and their bounty of new music is going to leave our guts full of delightfully disturbing yet danceable tunes for years to come.

If there’s one thing we learned from I Heart Local Music’s showcase at the Jackpot, it’s that Lawrencians were thrilled to discover how much fun local bands can have with their audiences at a show. There was no standout band from this night’s lineup because every act left a lasting impression in their own special way. We witnessed, before our very eyes, music lovers discovering their new favorite band, which was our intent all along. Keep an eye on I Heart Local Music for more opportunities to get familiar with your local scene. You may end up finding just the type of music you’ve been looking for.