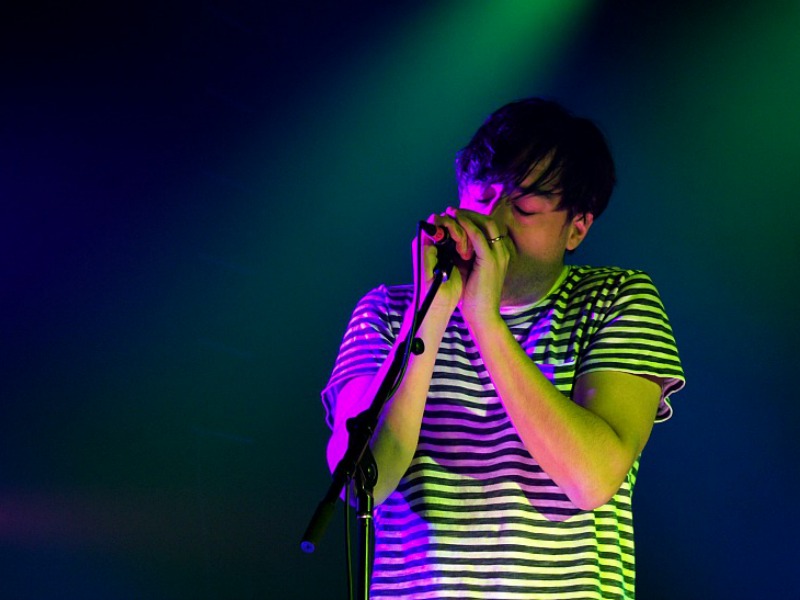 I feel pretty blessed that I got to see Grizzly Bear perform back in 2009 at The Blue Note in Columbia, MO. I never thought it would be three and a half years before I’d see them live again, and my excitement for this show at the Uptown was through the roof. The crowd clearly felt this way too. The quartet (a five-piece live band) has been making incredible music since it started as a solo project for Ed Droste and their live show surpasses all the beauty they put on their records. Back in Columbia, the band sold out at a much smaller venue and I was captivated by hearing their harmonies live, the lit-up mason jars that glowed with the music, and the intensity they brought when playing their softer songs. A crowded Uptown theater was buzzing as the lights dimmed and Grizzly Bear took the stage. 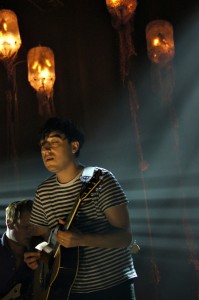 The band was all smiles when they ripped right into “Speak In Rounds” from last year’s Shields (personally, my favorite album of 2012). The lights onstage exploded into a rainbow and flooded the band with color. As the song faded into the instrumental “Adelma,” these ghoulish lanterns began to float up towards the ceiling. The band continued to quietly play, Chris Bear’s voice floating with the jellyfish-like lights. The spooky lanterns rose up quietly, without fanfare, just in time for Daniel Rossen’s killer intro to “Sleeping Ute.” From there on, much like those mason jars years ago, the lanterns surged with the music and became a sixth member of the band; moving with the tunes and pulsing with flashes of brightness. I’ve had friends write-off Grizzly Bear as a “quiet band” and that’s a fine opinion, but fans know the band can play tremendous rock ‘n’ roll songs. When they performed “Yet Again,” the venue shook so hard I thought the walls would crumble.

The majority of the set contained songs from Shields and Veckatimest, with a 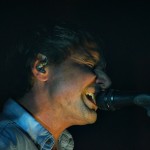 surprise early on when they played “Shift” from Horn of Plenty (later released as a full band version on 2007’s Friend EP). The song is a heartbreaker and even if you aren’t a fan of the band, you may recognize it from the film Blue Valentine. When they played the devastating “Foreground” soon after, Chris Taylor jokingly said, “That was the last quiet, sensitive song.” As soon as they went into “Two Weeks,” the already excited crowd went ballistic. There was an incredibly charming moment, when a rare miscommunication had Taylor, Bear, and Rossen miss the catchy “whoa-oh-whoa-oh-whoa-oh” before the second verse. I only mention this, because of what happened next: Rossen, on the keys, looked at Bear, on the drums, and the two smiled briefly and then began to talk to each other about what happened. They never stopped playing. Bear even shrugged and laughed while he was playing the drums! I can barely talk and walk at the same time and these two gentlemen were having a conversation during a song, as if they weren’t playing to over a thousand people in the venue. They never missed a beat as Droste continued to belt out the lyrics and I couldn’t help but smile because of what a goofy, intimate moment it was. 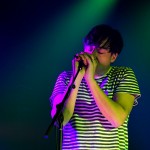 The set closed with the juggernaut “Sun In Your Eyes” and when the crowd kept cheering, the band played an encore of two Yellow House tracks. As Rossen’s guitar closed out “On A Neck, On A Spit” the lanterns unceremoniously dropped to the floor. In their lazy descent, the band was only a silhouette on the stage, leaving the crowd with the memory of a hauntingly tremendous performance.

The band didn’t say much during their set (a little shout-out to Gates BBQ and Cody Critcheloe of SSION), but they didn’t need to. Grizzly Bear has a stage presence that commands the audience’s attention, without demanding it. Once again, the band played a tight set filled with hypnotizing visuals and a fantastic outburst of emotional music. They are a band that is earnest and wild at the same time. I wouldn’t miss Grizzly Bear for the world.

Setlist:
Speak In Rounds
Adelma
Sleeping Ute
Cheerleader
Yet Again
Shift
A Simple Answer
Foreground
Ready, Able
While You Wait For The Others
Two Weeks
Half Gate
Sun In Your Eyes

Knife
On A Neck, On A Spit