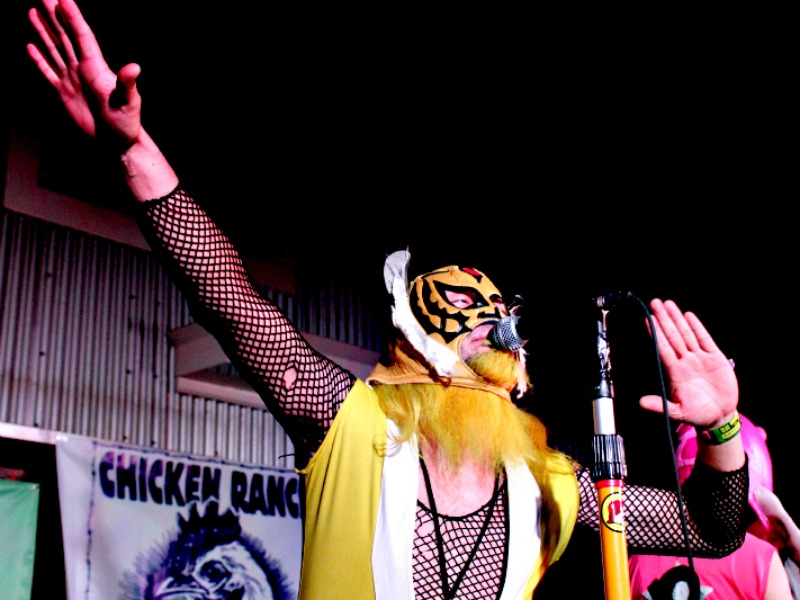 Rock and roll used to be all about sporting matching outfits and choreographed stage antics. The last thing I expected to find at SXSW was this purest form of energy, this raw state of positivity and passion. There was no barricade. There were no bouncers. And rock and roll – at least in that moment – was alive and well as it once was. 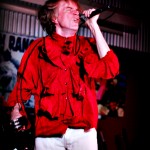 As I walked in to the Chicken Ranch Records showcase, first to the stage was a band with which I was unfamiliar. But that didn’t stop them from blowing me away. The Woggles came out looking sharp. I believe they must have been sent here from the past as a reminder of what rock music was all about. Watching them play was like watching music being reborn. And though they may have looked older on the outside, I assure you that age was no factor in their performance. After leaping into the crowd on several occasions, the tambourine-wielding vocalist scaled the PA speakers.

I don’t think anything could have possibly prepared me for the next set. Peelander-Z is beyond categorization. Each band member was adorned in their own color and had a collection of wild headgear that they cycled through as they played a corresponding song. They also made it easy to know what song was coming next, as they held up giant cards with the song titles as would a ring girl telling you what round of a fight was about to begin. 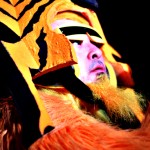 A sign was thrust towards the sky with the words “MAD TIGER” written boldly upon it. This is when all hell broke loose. Tiger masks were conjured from places unknown, along with a suitcase of dented metal bowls and splintering wooden drumsticks that were distributed amongst the crowd. I lost sight with many of the band members as they disappeared into the crowd and created an impromptu drum circle. The rest of the set went on like this.

It’s bands like this that keep the life in live music. Do yourself a favor and try to track these bands down.