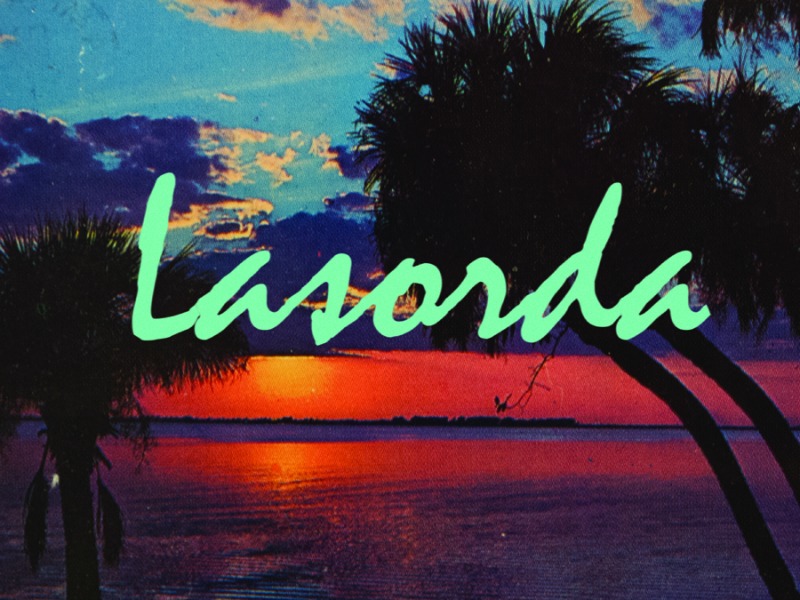 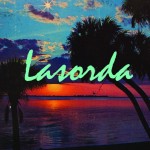 Just glancing at the album art for Lasorda’s self-titled record, I instantly thought of the movie Drive. The cool 80s font, the neon color, and of course, the vintage ocean/palm tree postcard with faded postmarks reminded me of Los Angeles. Ahhhh, the beach. And strangely enough, the record has some similarities to the Ryan Gosling film; it’s got a lot of style and at times a brooding element to accompany the mellow tunes. 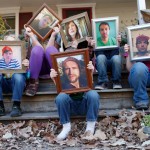 The record sounds like it was born in the Pacific Ocean, yet this supergroup has most of its ties right here in the beautiful Midwest. Featuring locals (current and former) Matt Pryor, Suzannah Johannes, Nate Harold, Josh Adams, Dustin Kinsey, and Mike Strandberg (an incredible New Yorker who I have seen five times with Kevin Devine), Lasorda brings us a synth driven album with a heavy beat that feels like it time traveled from the warm west coast of years past to the cold, dark present.

The band sounds like they fall somewhere between Beach House and Best Coast (and at times, Arcade Fire); they’ve got attitude, but still have a smile. “Sleep When You Are Dead” is a perfect example of this; the bass comes in heavy and Pryor snarls and spits his lyrics, but when he sings the “yeah yeahs,” you just want to dance.

For most of the record Johannes is front and center and it’s fun to hear her low whisper over the dancey tracks. I challenge anyone to not start moving when the drums get going on “The Age of Wonder” or the sleek rhythm of “Interlaid.” The harmonies with Pryor are fantastic too (“No Intent To Return”).

These six musicians have a great chemistry and even though the record is just over half an hour, it feels sprawling at times. It doesn’t rush itself and just breathes… even when the guitars crash in (“Of Little Faith”). Lasorda is the product of six friends clicking; the record is poppy even when the songs take a goth turn (“Basque on the Borderline”). All the individual strengths of the collective stand out; from Pryor’s growl to Johannes’ smooth vocals to Strandberg’s soaring guitar. This album is a perfect way to melt the December cold.

Favorite Tracks: “Interlaid,” “Sleep When You Are Dead,” “His Laugh Is Lowe”

Editor’s note: Bassist Nate Harold released a gorgeous remix of the first track on the album. Give it a listen below!