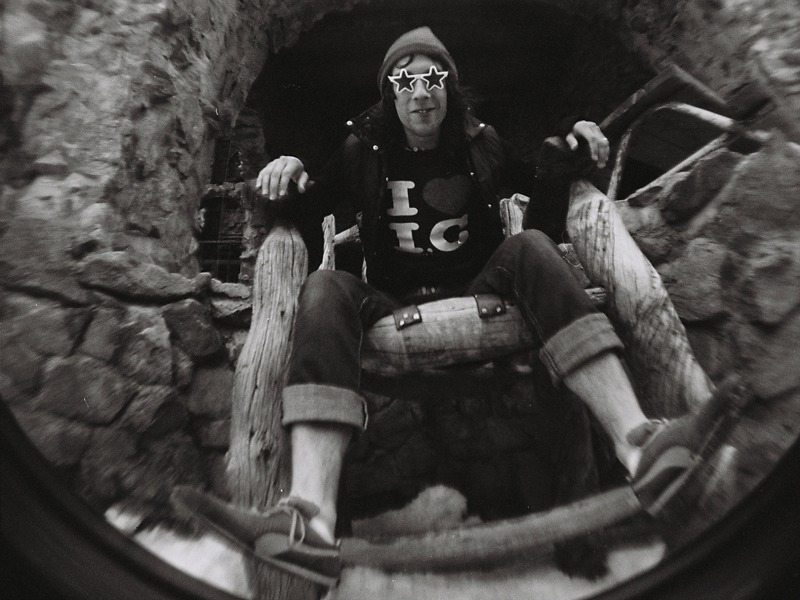 When putting together a vigilante task force, you don’t pick just anyone off the street. You’re gonna need an experienced leader, a con man, a wildcard and Mr. T. Booking a last-minute show in Lawrence is no different. When songwriter David Strackany is coming through town, you need exactly the same thing. So we got Y[our] Fri[end], Max Fields, and Carey Scott.

The show will be in a familiar setting on Thursday, yet an unfamiliar (and unnamed) room. For now we’ll call it the SeedCo Loft at 826 Pennsylvania St. and this will be it’s inaugural show. The music starts at 8:00 pm and the cover is only $5. It should be an intimate evening of excellent music.

Here’s a quick Q&A with David sharing a bit about his experience on the road as a solo musician.

1. I’ve seen you play shows in bars, an Eagles Lodge, a warehouse and even an anarchist info shop. The SeedCo Loft is a yet-to-be played-in venue. What are some memorable or strange venues you have played?

Well, gosh. There’s quite a few.I just shine the spotlight of my memory and it takes me anywhere I want to go. There was this place called The Department Of Safety in Anacortes, WA, that was this old Fire Station that they turned into a D.I.Y. co-op art venue. I remember a house called The Spirit Of Peace in Omaha that had this outdoor festival with fire breathers and this one random fella in a carrot costume kissing the hostess. I played in a Border’s Books outside of Atlanta once, and that sure was strange. This little bar in Bolinas, CA, a secret beach town where they took the signs off the highway so people can’t find the place. The Daytrotter barn shows are always a blast; there was some two-story, 200 year-old octagonal barn, had hay in it and everything.

Europe’s not quite so thrifty as America in general but I do remember this one spot underneath a church in Prague as being a standout; an epic cellar with a vaulted stone ceiling they’d turned into a venue and bar and gallery.

2. Is part of the appeal of being a solo musician getting to play in these interesting, non-traditional spaces?

Well, that’s part of it, sure. You’re much more portable traveling alone. But bands work in most spaces except for the small apartment shows.

I opened for a band in Chicago at a cafe recently and that didn’t go over so well for them; noise complaints, etc. I’ve done the backup band thing and it’s really wonderful. Still, the charm for me of being solo is you’re the riverman and you’ve got these people in your shitty old boat and it’s a long ways, and when you finally get there to the other side you feel like on some level they really know who you are. There is without a doubt more of a connection possible with solo performers. It’s often not as fun to listen to, I won’t lie, and you can seldom dance like you can to a big ol’ band, but you listen to the creak of the boat as he’s cutting the water and you walk out of there feeling like you really just met someone.

3.When people ask me where you are from, I usually say a little bit of everywhere. Is that accurate?

More no than yes. I used to be reluctant to answer that question. I was looking for a home and I felt like I didn’t have one. I haven’t stuck around one place all that long enough to say I’m from there, and the places I go I go for a month or two at a time and it keeps me set apart from people. It’s not a good thing. But as I’ve trucked along, I’ve met other wanderers who give me the same answer, “nowhere,” or “all over.” And I don’t push it, but at the end of the day I assume it’s barely true. Sure, often the answer is more complicated than it’s worth the time to explain, but these days I like to think of it like if someone from Russia asked you where you were from, what would you say?? Everywhere? Really? Everywhere, man? That’s a LOT of places.

4.What’s a question you’ve never been asked, but always wished someone would?

The best questions are the ones you don’t know the answers to. Maybe “will you marry me?”