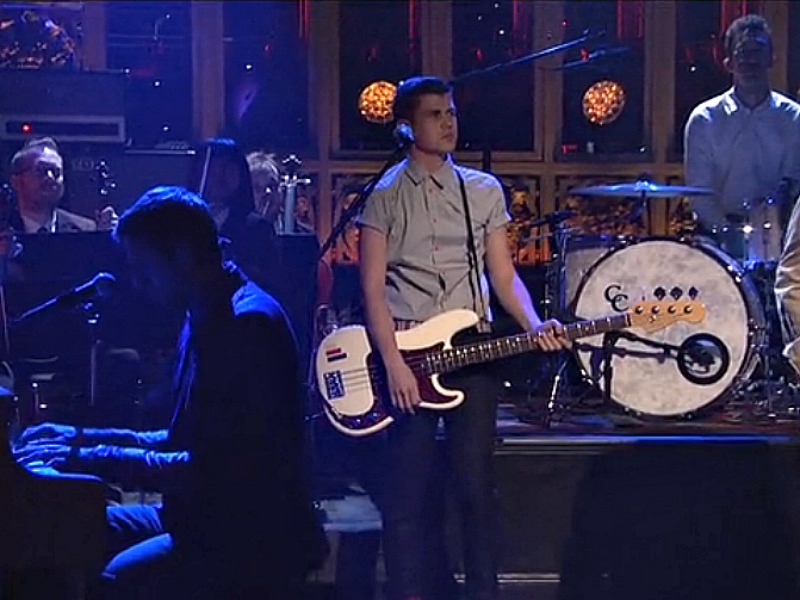 Facebook0Tweet0LinkedIn0Pin0
On Saturday night, many eyes in Lawrence were glued to the television to catch the latest episode of Saturday Night Live. What most Lawrencians may not realize, however, is that they were watching one of their own. Nate Harold is the bassist for Fun. and a friend of I Heart Local Music. We first mentioned our excitement to watch him perform live on national television on Saturday night over Twitter, but our excitement had been brewing for weeks.

Over the last year, Harold has been caught up in a whirlwind of tours and appearances with the band. He’s played several festivals in the U.S.(including Kansas City’s Middle of the Map Fest, countless shows overseas, and appeared on late-night television.

But live television is different. There’s a certain element of excitement and electricity the night can bring, and Harold wanted it to be memorable. What he didn’t expect was exactly how it would become memorable. “Halloween was the night before rehearsals, and we went as the cast of ‘Friends,'” says Harold. “I was making a wig for our stage manager and got superglue in my hair, which led to two chunks of my hair being ripped out and are clearly visible on the right side of my head. The hair and makeup team tried fixing it to no avail. Pretty memorable.” The stylists may not have agreed with the accidental haircut, but they did like his vivid red socks that he showed up in, and told him to wear them for the performance (you’ll notice them in the clip below).

Speaking of sweet style, it’s no secret that SNL cast member Jason Sudeikis is a massive Jayhawks fan. He sometimes appears during the SNL credits sporting his KU pride on his clothing. If you’re familiar with Harold, you’ll know his heart also belongs to KU. He busts out his beloved Jayhawks jersey for performances (and game days) at every opportunity. For this reason, Sudeikis and Harold are familiar with each other. Harold says on Saturday, they both showed up wearing KU basketball shorts. The University shows Harold that same love right back. After the show, KU (along with a host of Harold’s Lawrence-based comrades) tweeted about his performance.

The night before the big show, Harold tweeted “Watching talent like Bill Hader, Fred Armisen and Louis CK rehearse at SNL is a real dream come true.” Harold told us “Comedy is probably right under music in things I’m influenced by.” But he hasn’t even watched his own performance on the show yet. “I want to remember it exactly as I saw it,” says Harold. “Once the final song was done, we had a big hug and a giant sigh of relief.”

Now that the excitement is over, it’s back to work for Harold. He still gets messages every now and then about the big night, but he says right now it’s back to “Touring until more hair falls out.”

Bonus fact: Harold wasn’t the only one representing our neck of the woods on SNL. The drums used in Fun.’s appearance on the show are from C&C Custom Drums, a fantastic company out of Kansas City. Also, Harold’s bass amp, from RCAB Audio, was designed and built in Lawrence.

Bonus clip: a video we shot way back in 2004 of Harold performing Kelpie performing at the Jackpot: