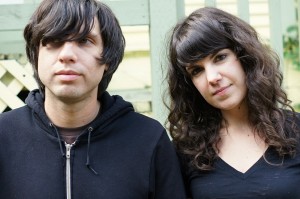 Leaving Lawrence is always hard. We’ve got a beautiful and vibrant downtown, a thriving music scene, and more happy residents than you can shake a stick at. But leaving Lawrence may have been one of the best moves that Danny Rowland and Jen Weidl have ever made for their music careers.

The adorable duo performed in Lawrence as The Transmittens. Their music was so sugary sweet, you’d leave their shows with cavities. But Weidl was offered a job at an architecture firm in Seattle, and Rowland followed. That’s when they decided that their music needed an upgrade, and the Transmittens became Seapony. “Before leaving for Seattle, we had decided on a new band name after cutting up names of words onto pieces of paper and drawing them randomly from a plastic bowl,” says Rowland. “We had also recorded one song that would become our first single, ‘Dreaming.'”

Rowland and Weidl kept their music business pretty low key. They tend to use a drum machine and record most of the music at home. But it didn’t take long to get noticed. Rowland says a London-based label contacted them after they posted some songs to Bandcamp, and before long they were whisked off to a show, opening from La Sera and No Joy (an I Heart Local Music favorite). What followed was an incredible stroke of luck and opportunity. “La Sera being on local label Hardly Art, a fine fellow from the label was in attendance and approached us after we played,” says Rowland. “The turnout for the show was small, but we essentially got a record deal from our first gig.” After that, Seapony found themselves playing with the likes of Beach Fossils, The Pains of Being Pure at Heart, and Built to Spill. But amidst all the touring and festivals, they maintained their jobs. This resulted in “short tours and lots of fly-in type shows,” says Rowland. This September, they released their second full-length album, Falling. Later that month, we caught up with the two at their cozy home in Seattle, nestled on a beautiful street lined with historic homes and apple trees. They let us record this private performance at their home, featuring a song off the soothing album.

In the future, keep an eye out for a new music video from Seapony while they get ready for an upcoming West Coast tour. To keep tabs on the band, head over to their artist page on Hardly Art.

Photo Gallery: Up the Academy / The Sluts / The Original 185