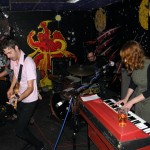 Rooftop Vigilante’s new album is called Real Pony Glue, which has to be an anagram for venerable Lawrence bar the Replay Lounge.

The great Love Garden is also honored, right in the title of track one. The album is probably filled with many salutes and slaps aimed within yards of Mass St., be they subtle and personal or loud and public.

Really, Rooftop Vigilantes themselves embody aspects of this town. They came together a few years ago during the days of Boo And Boo Too and the Chomp Womp collective. Such bands always seemed to have a lot of fun and to get the best out of life in Lawrence. With a lot of wind in their sails from Kansas and around the US, they should go far with this strong, straightforward album.

Each track is a sprint to the finish, and, I imagine, a drink of PBR. It’s a CD release, even though they have previously embraced cassette releases on reasons of simplicity and style. Hey, CDs are still cool by me.

Colossal celebration: Major music event plans to turn it up to 11