Editor’s note: Bethany Smith is an experienced rock journalist, and has graciously agreed to review The Magentlemen for I Heart Local Music. We are grateful for her extensive knowledge of local bands in Lawrence and Kansas City. 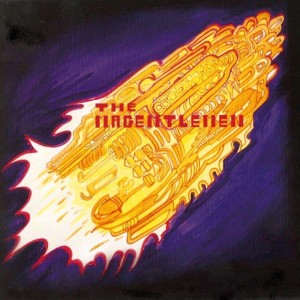 Forming a rock band in Lawrence, a town with a reputation of being ‘indie/hipster,’ can be risky business. Though if anyone can handle that challenge, it’s the ‘6 loud mouth gents’ of The Magentlemen.

The Magentlemen aren’t strangers to the Lawrence music scene; several of its members have already played in various Lawrence bands such as Popular Mechanics. The band has also been stirring up quite a buzz with its dynamic live shows. Now, with the release of their self-titled EP, the Magentlemen are perfectly poised to reclaim Lawrence as a rock town.

The Magentlemen EP starts big with “Circles,” a song that seems almost tailor-made for the popular video game “Rockband.” Loud drums and even louder guitars will undoubtedly make hands twitch up subconsciously to air guitar along…especially when the big instrumental solo hits. Between the band’s three guitarists, catchy hooks are a constant throughout the EP, but “Circles” lets these guys shine more than any other track on the record.

If there’s one flaw to the spectacular guitar riffs of “Circles,” it’s that their mixing often overpowers that of the vocals. The band seems to improve this by the next track, “Trevor,” which delivers vocals that are more distinct and crisper for the verses. Though it isn’t until the swanky “City Lights” that everything really seems to come together. “City Lights” slows things down a bit and not only does it bring out the vocals, but it also brings out the bass. While the guitar trio starred in “Circles,” “City Lights” spotlights a velvety bass line that gives listeners a perfectly paced soundtrack for a nighttime stroll.

The next track picks up the pace and fans of Lynyrd Skynyrd will quickly fall in love with the bluesy rock of “Ocean.” This song again deploys big drums and big guitar solos, but it adds an organ keyboard layer that gives a more bluesy feel. The vocals channel “Sweet Home Alabama,” which are sure to make it a success at the band’s live shows.

“Lucky Man” has a tough act to follow after the instant hooks of “Ocean.” But by the next track, the Magentlemen start to find their groove again with the subtler “One More Day.” It isn’t as in your face as say “Circles,” but it does a lot better at grabbing attention than “Lucky Man.”

If there’s one thing the Magentlemen know, it’s how to end with a bang. The final song, “Baby Boy,” combines the best of all the preceding songs, yet stands out as the most unique song on the EP. It starts as a folkier tune – with open sounding vocals and acoustic guitar. But then the drums shift the piece into a rocking number replete with electric guitars. It grows even bigger, but then reels back to a soft acoustic riff, which would have left listeners content as a finale. But as stated before, the Magentlemen know how to end big. They reprise the electric guitar riff and leave listeners even more hooked and wishing for more.