The Church of Malt Liquor strikes again….in their underwear

The Church of Malt Liquor strikes again….in their underwear 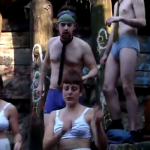 We couldn’t believe our eyes the first time we saw them, but it’s true. There really is a venue in town that is nothing more than a ditch near some railroad tracks.

Usually bands (and music lovers) crawl down into this ditch (and string as much electrical cord as they can) and rock out before getting found out. It’s a pretty rad idea. I’m officially declaring anybody who goes to these shows a badass.

Another clip of a show at The Church of Malt Liquor has recently come to our attention. This time it’s of a Doo-Wop group in their underwear. Most of them are in panties, bras and slips. Although we do admire the courageous fellow who sported a leotard for the performance.

Yes, I know we’re late to the party (this clip was uploaded back in April), but we still felt the need to show you this fantastic sensation.