Editor’s note: We’ve invited local music lover Peter Adany to review the new album from local band Hidden Pictures. We enjoy his work, and hope that he will write for us often. 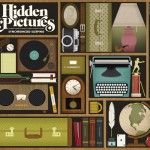 Kansas duo (plus supporting players) Hidden Pictures bring together rock, folk and balladry in a style that might be recognized as something of a Midwest signature.

Synchronized Sleeping is reminiscent enough of Saturday nights at local venues that it could almost masquerade as a live show bootleg, were it not for its adept performances and tasteful studio mastering. The album contrasts plugged-in energy and a largely acoustic sound in a not too surprising aesthetic.

The cover art’s motif of delineated miscellany follows into the tracklist, a lineup of diligently parceled songs with various yet connected themes. Songs are led alternately by Richard Gintowt’s vocals and Michelle Sanders’ harmonized chorus. The generally short tracks are eagerly paced with tidy progressions and purposeful drumming. Here and there the songs take on a little too much classic Americana, otherwise catchy alt-pop leads the way.

Supporting instruments like glockenspiel and pedal steel fill out the production with pleasant vibes. In about forty minutes of skillfully crafted arrangements, Synchronized Sleeping packages convergent styles with an aim to please.

Catch Hidden Pictures at their album release show on May 13th at the Replay.

Pizza Power is moving (sort of)

The Church of Malt Liquor strikes again....in their underwear