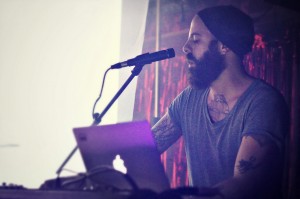 White Girl is no basic bitch.

We’ve been seeing signs of a resurgence in electronic music in Lawrence, thanks to bands like Middle Twin and Wolf, The Rabbit. Now, you can add a large contributor to the lineup.

White Girl is the brainchild of Marty Bush, and you really have to be a mastermind to pull off what this guy does. You may have already spotted him spinning occasionally at the Replay. He puts on a hell of an electronic set when he DJs, but White Girl takes it up several notches.

Bush creates his own special brand of electro and techno that could really get the masses moving. The one-man-band sings through a series of vocal effects over a flurry of his own electronic noises. The songs have a solid structure and should really turn some heads in this town.

Additionally, his presentation is phenomenal. He sits atop of some sort of glowing space ship he put together, constantly enveloped in fog and lasers while projections play on a large screen next to him. It’s a neon, electronic, 80’s dance party to the max, and there’s no shame in enjoying these maneuvers.

Here’s a snippet of one of the songs he performed at the Jackpot over the weekend. Considering his intense rock background (Salt The Earth, anyone?), we consider this performer monumentally talented with a wide range of abilities. White Girl should not be taken lightly, and we hope he becomes a fixture in the second-coming of the Lawrence electronic music scene.

White Girl will be holding an album release show at the Riot Room in Kansas City on Friday. You can RSVP to the event here.