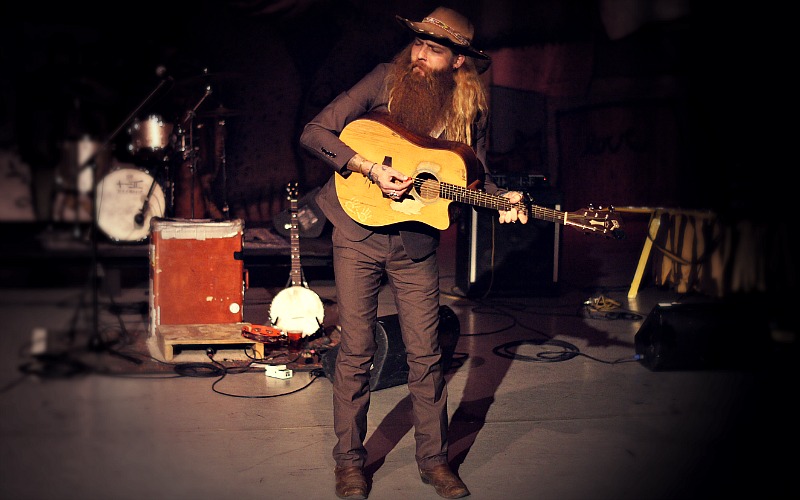 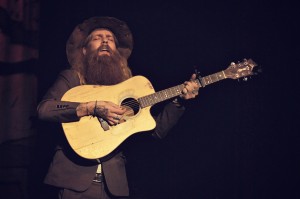 We know there’s been a lot of love for Tyler Gregory lately, but his Saturday night performance at the Lawrence Arts Center with Nicholas St. James was one for the books. Yes, Tyler Gregory performances are abundant here in Lawrence… but on this night, he pulled out all the stops. This was Tyler as you’ve never seen him before.

The night served as a release show for his latest album, Roots Below. So naturally, he called upon his close cohort and confidant, Nicholas St. James. 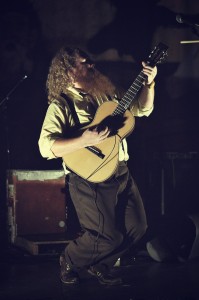 Nicholas and Tyler have spent a lot of time together, especially over the last year. They’ve played countless Replay patio shows, jammed over at Papa Keno’s, and toured together. When you spend that much time with someone, a lot of information gets exchanged. Thus, Nick (always the comedian) teased his musical accomplice by treating the audience to “Random Tyler Facts” between songs. His favorite word is asparagus, and we even learned about Tyler’s first kiss. Nick also revealed that Tyler is from Wamego, which comes as a surprise because honestly we thought he was raised in the woods by prairie chickens.

All jokes aside, jolly old St. Nick delivered a serious performance. If you’ve ever seen him live, then you’ll know that he always brings his own set of yellow lights to set the mood. What we didn’t expect was the 50-foot shadow of the performer that would be cast upon the theatre. It was fairly intimidating to watch this shadow figure while St. James growled out songs about cocaine, gin, and Old No. 7. His set left the audience all sorts of worked up, cheering and on their feet as his famous guitar tricks echoed throughout the building. 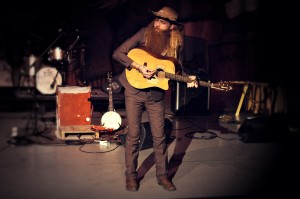 After a short intermission, Tyler Gregory took the stage donning a three-piece suit (remember, this is Tyler as you’ve never seen him before). He opened up the night by stepping out onto the stage and performing the first song standing up. This is notable because he has always performed sitting on a suitcase and stomping on a box. He didn’t even have a guitar strap, he just hugged his acoustic close to his chest, his tall stature even more prevalent as he leered about the front of the stage under a bright spotlight.

Eventually, he did take his preferred seat upon that old suitcase. But sometimes, he’d abandon his post, leap up and away from the mic, and bellow that powerful voice of his up through the seats, all the way to the back of the auditorium. He could have done the entire show without a microphone, and he still would have been just as loud because that’s the kind of power he packs with those pipes of his.

He then ditched the suit coat and had a fiddler join him onstage. This particular musician is a multi-instrumentalist, and the audience just melted when they heard him play. He fiddled, he plucked, and he even broke out the mandolin. It was such a crisp sound that added an entire dimension to these songs. 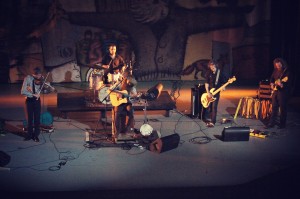 Eventually, a full band (including Nicholas St. James on guitar) joined him onstage. The performance was phenomenal. Some songs, such as “Where the Vines Meet the Trees,” were chilling as the band played perfectly together while maintaining an eerie tone. Other numbers really got the audience going. We’ve never heard so many whoops and hollers out of an audience at the Arts Center. But then again, this was a folk show (and an extraordinary one at that).

This was Tyler’s last show of the year in Lawrence. This week, he heads out on the open road to tour nonstop in warmer regions. He’ll return in the Spring when the weather warms up again. His show at the Arts Center was a hell of a way to go out, and those who braved Saturday night crowds and skipped the Royals game were handsomely rewarded with what was probably the most uncommon performance in Tyler Gregory’s history.

Iceage returns to the Jackpot