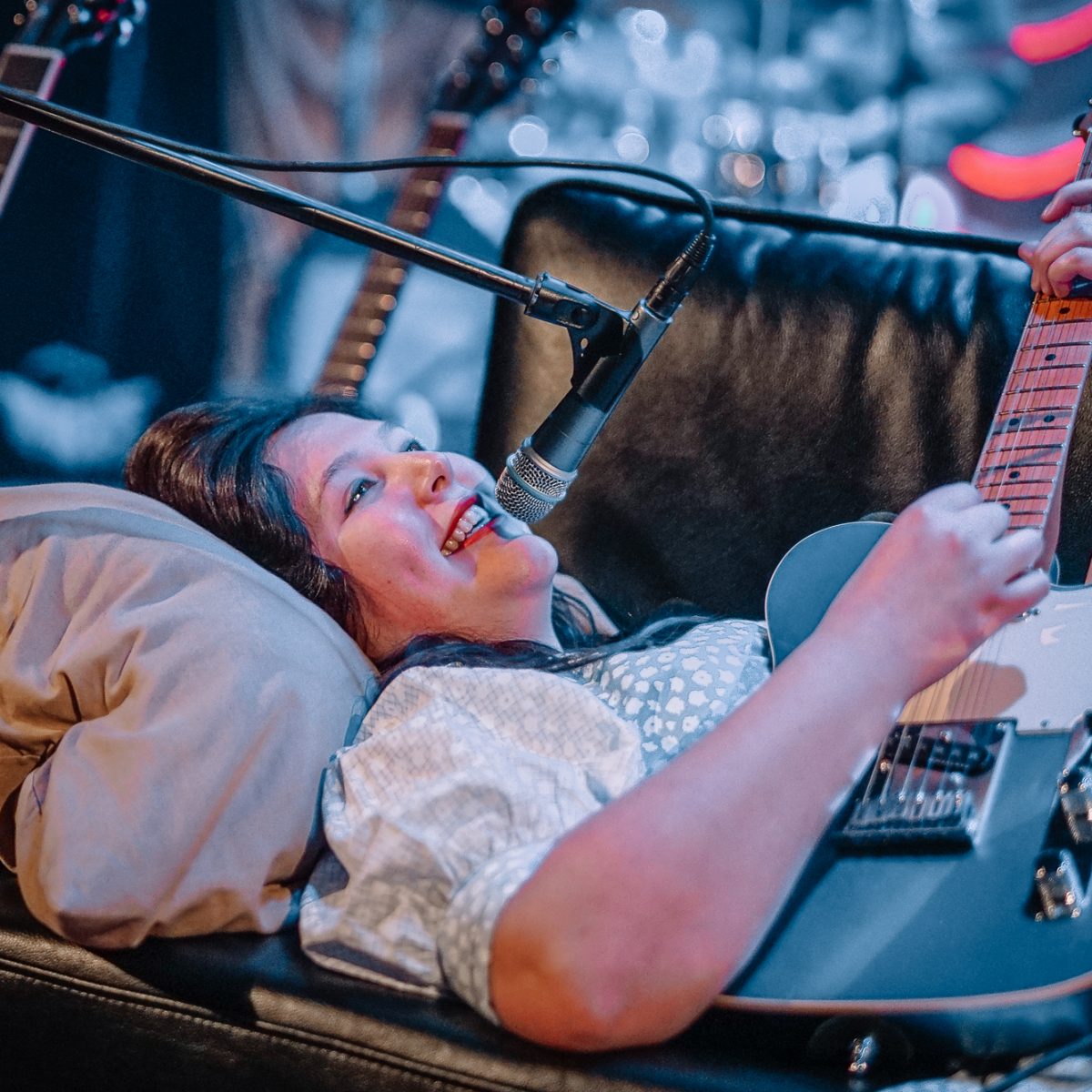 “Hello,” Lucy Dacus announced when she took to the Liberty Hall stage on Saturday night. Then, in front of a sold-out audience, she calmly laid down on a couch center stage, and quietly said “I’m on a couch.” The crowd went wild.

Now normally, having a lay-down on a couch wouldn’t conjure up such cheers, but Dacus has had a heck of a time over the past week. In the midst of a massive tour– with many, many tour dates still remaining– she suffered a setback with two herniated discs. Rather than cancelling and rescheduling her sets, she took into account everyone’s weariness from COVID cancellations and decided that the show must go on… and she did so as comfortably as she could: laying down on a couch.

When the crew was setting up the stage, an overly-enthusiastic round of applause came when the couch got moved into position. By now, her die-hard fans were well aware of the couch becoming the unintended sixth member of the band. It’s almost like they were really looking forward to this unique setup with the small sofa. But perhaps they were trying to be encouraging, in a way. Everyone’s suffered setbacks over the last couple of years, right? For these fans, Lucy Dacus’ raw and emotional lyrics were comforting them throughout the pandemic. Now, with Dacus’ own setback, they were trying to reciprocate that support.

Since a music artist is really only as good as their fans, it was nice to see the rapport and love in that room. It was almost overwhelming. Dacus’ songs are the type where it’s perfectly fine to cry along to (happy tears, that is). Her transparency was so visible, she even played home videos in the background prior to her set. Through the footage, we got to see the artist from her very first week of life all the way through her childhood, as the videos documented her progression and infatuation with performance and music. This, combined with her lyrics, meant there were no secrets. Everything you needed to know about the artist was on display (not a surprise, coming from the social media generation), but done so in a way that makes her one of the more relatable musicians on the road right now. No one will judge you for getting a little emotional at a Lucy Dacus show. It was her at her most vulnerable, both artistically and physically, and she was taking us along for the ride. Scooter over, Lucy. After a heartbreaking and beautifully transparent set like that, we may need to lay down as well.

She brought along fellow indie-rocker Indigo De Souza, who got fans to immediately squee upon her entrance to the stage. They lost it when she dove into her popular hit, “Kill Me,” early in the set. De Souza was a perfect pairing as the opener for the show, and the rich and emotional stage lights (reflecting off the brand and shiny new stage at Liberty Hall) made even the most timid dream poppers headbang along like it was a rowdy rock show.

Photo Gallery: The Whiffs / Chad Ray Turner / The Roseline at the Taproom