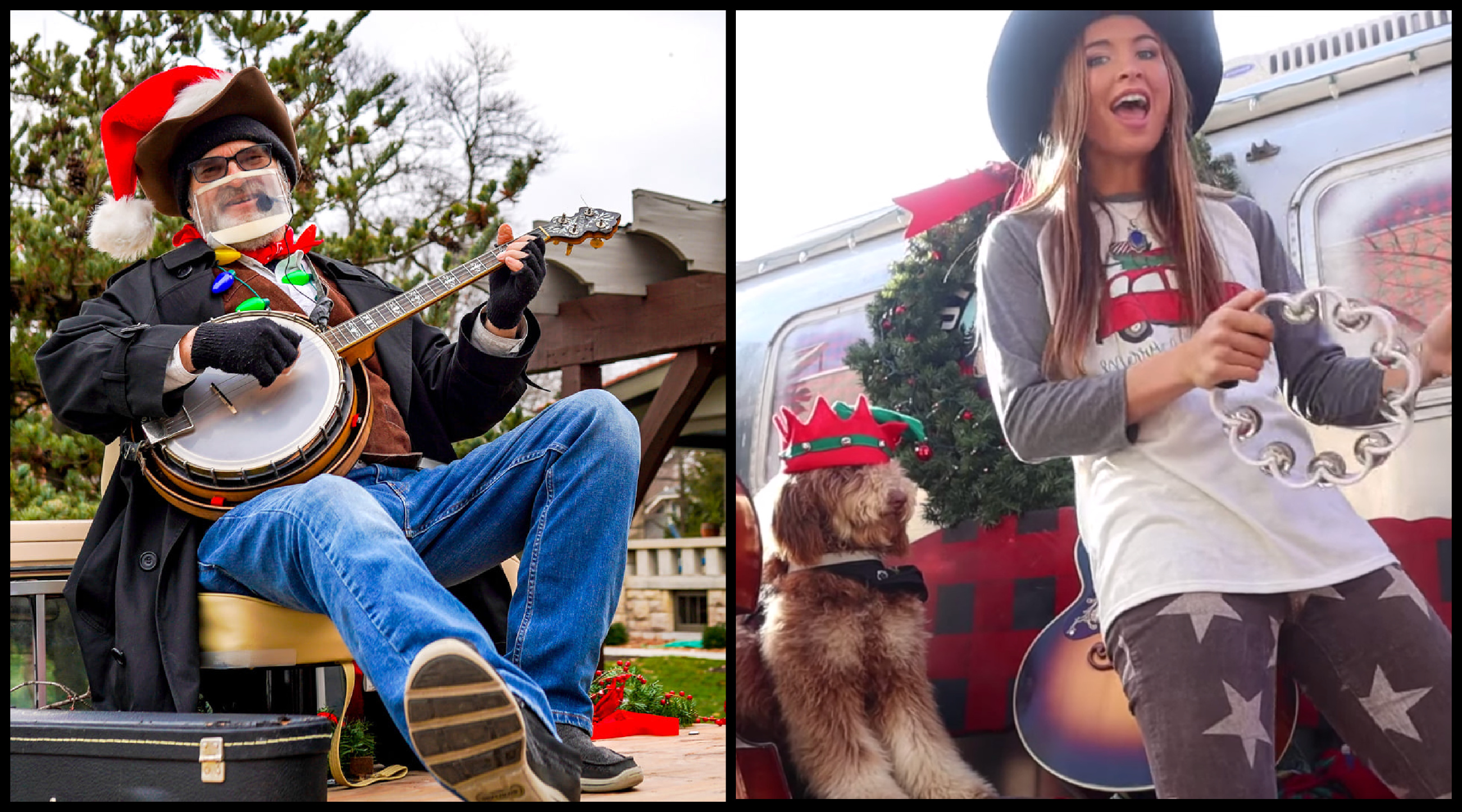 How ya doin, bud? You ok? We know this Christmas is pretty rough, what with COVID cutting into the all yule you were hoping to cash in on… and it looks like you may feel a little down in the dumps. Well, unless you’re a big city gal about to learn the true meaning of Christmas thanks to a determined maple syrup farmer in a made-for-TV Hallmark film, you may be needing a little holiday boost from the Community.

Luckily, you live in the whimsical town of Lawrence, where musicians have been pulling overtime to salvage some of that yule (so much yule, you guys). Here are some of the funnest (and safest) ways they’ve been sharing the festivities with the community.

It looks like Santa Claus is coming to town, and he’s bringing along some musical fun. Ric Averill built a stage truck to help spread some of this holiday cheer, and has spent every weekend in December visiting various locations and playing a socially distanced show to the community. You can hear holiday tunes and even take a socially-distanced photo with Santa. He’s got two more stops this weekend:

Bring some hot chocolate, and don’t forget to wear a mask!

You’ve probably seen the GIANT reindeer hovering above Lucia. The venue has temporarily turned into a Winter Wonderland, with Christmas lights strung up over every square inch of the bar. Word is reservations filled up, but Lily B Moonflower and Jake Keegan are taking your inside for a unique look into the whimsy.

They just released a video of them covering “Winter Wonderland,” shot inside the venue. Lily is arguably one of the most charming and likable figures in the local folk scene, and this video is no different… and are you even a local folk act if you don’t put your dog in your music video? Points for the four-legged friend’s cameo.

Speaking of likable folk duos with cool dogs, Jenna and Martin have planned a special virtual event this holiday season.

In addition to playing music, Jenna will also be showing audiences who tune into the virtual event how to make a Christmas Cocktail (both kiddie and adult versions). Word is Martin’s going to attempt setting a record for the most Christmas songs played in two minutes on the piano, which we don’t doubt (have you seen how fast he plays his guitar??). They’re also giving away some merch, so mark your calendars for Christmas Eve at 7:00 p.m. on Facebook Live.

Normally, Americana Music Academy would be sending carolers out into the streets at this time of year. But in the interest of staying safe, they’ve moved the jolliness online. You can join the host of musicians virtually on Facebook this weekend, where they’ll be broadcasting their carol-a-long live with anyone who wants to join. This is an extra bonus for introverts who love singing Christmas carols, but want to do so from the comfort of their own home.

In lieu of a giant big-band Christmas at Liberty Hall, Kansas Public Radio is celebrating online. The Virtual Holiday Show aired on Wednesday, featuring staffers sharing Christmas stories and performing holiday songs. The radio version will air on KPR Presents this Saturday and Sunday, as well as on Christmas Eve.

One highlight from the event featured music from Carswell & Hope. You can watch the video below:

What’s that? Your Saturday’s booked with Christmas shopping? Fear not, the KU School of Music has you covered. This Sunday, they’ll be rebroadcasting their annual Holiday Vespers concert from the Lied Center. The KU School of Music has been broadcasting their showcases virtually all semester, with students spaced apart on stage. This is a rebroadcast of the 94th Annual Holiday Vespers featuring the KU Symphony Orchestra & Choirs under the direction of Paul Tucker, Mariana Farah, and Carolyn Watson. It was originally performed on December 2, 2018, and features some major holiday favorites, including Antonio Vivaldi’s Gloria (with a sing-a-long).

You can tune into the broadcast this Sunday at 6:00 here.