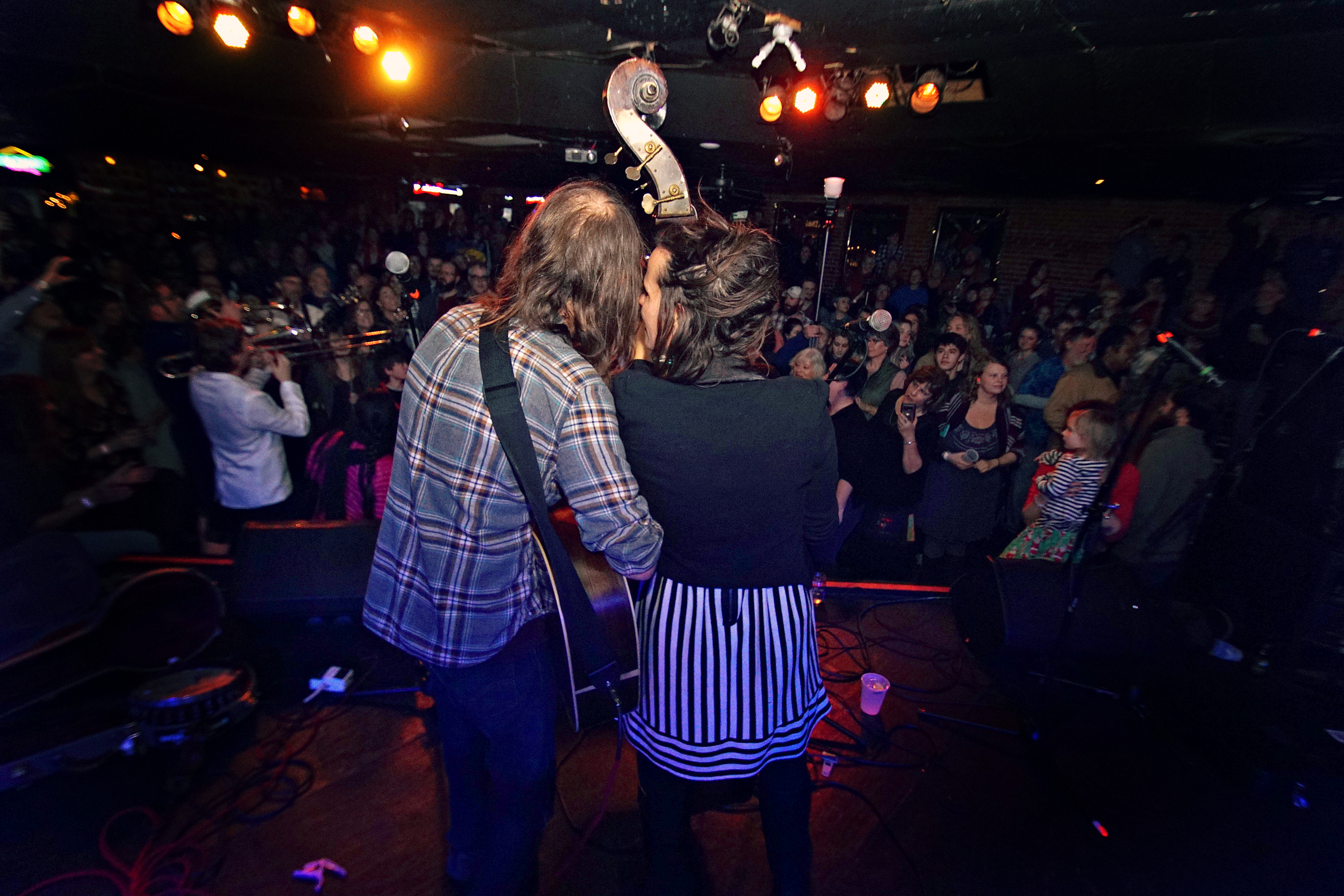 Some goodbyes are harder than others.

Truckstop Honeymoon, a band that has been the face of all things quirky and lovable in the music scene, is packing up and heading out. The husband and wife duo of Mike and Katie West spent nearly two decades bringing nothing but intense merriment to our fair city. The bluegrass musicians single-handedly changed the presence of the genre in Lawrence with their jubilance and ability to think outside the genre’s box, most notably with bringing the Mardi Gras Parade to our area. The yearly event, held every Fat Tuesday, saw musicians clad in colorful attire stomping down Mass Street, storming restaurants and businesses, and ending with an all-out celebration at Free State Brewery.

But now, the band is packing up their instruments (and all their children) and moving overseas (close to Mike’s old stomping grounds). But they didn’t leave without one final hurrah. They played a farewell show for the books at the Bottleneck on Friday (with another one planned for Saturday in Kansas City). Their eldest, Sadie, began her own musical project this year with The Mudd Club. The trio, featuring her brother Julian screaming away and beating on the drums, opened for Truckstop Honeymoon. The punk rockers delighted with angry songs about ice cream and the lack of surfing in Kansas.

Truckstop Honeymoon’s farewell set was high on the emotion. “This is a wonderful good music, art, and people town,” they told the audience. There is absolutely nothing more joyous in the music scene than a Truckstop Honeymoon endeavor. Their shows are where mothers gleefully dance with their children, twirling about with their eyes closed. Friends, neighbors, and everyone in between all sing along with odes to colorful characters and cultural landscapes. Once again, 11 year-old Julian took his seat behind the drums to play along with his parents for a handful of tunes.

But it was the surprise flash mob from the Mardi Gras parade’s brass mob that stole the show. We’re told it was a surprise and that Mike and Katie were unaware that a parade procession would be making an appearance. At first, a faint trumpet blared out from the pool table area, and the musicians closest to the duo emerged from the darkness. Then, more horns, drums, and revelers came pouring down the line. Mike and Katie, wearing grins big enough to fill the stage, eagerly joined in on their instruments as the marching band erupted in the crowd before eventually joining the duo onstage. Naturally, they were dressed in Mardi Gras attire. It was all smiles as they lead the crowd in “Down By the Riverside” and a handful of other Mardi Gras favorites. It was so packed, horn players had to point their instruments straight into the air to allow room for movement.

It was a bittersweet farewell, but in true Truckstop Honeymoon style always delivered with cheer and positivity. They assured everyone they would return for tours, and that they expected the Mardi Gras parade to continue without them.

For now, you have one last chance to catch them at The Brick in Kansas City Saturday evening. We doubt any sendoff will have more style than the one at the Bottleneck. A true artist leaves behind projects that outlive their time and continue to serve the community. What Truckstop Honeymoon did for Lawrence most certainly set the tone of art and music in this town for years and years to come. For that, we’re eternally grateful and looking forward to the next wave of unapologetic joy and happiness on the path they’ve carved for all of us.