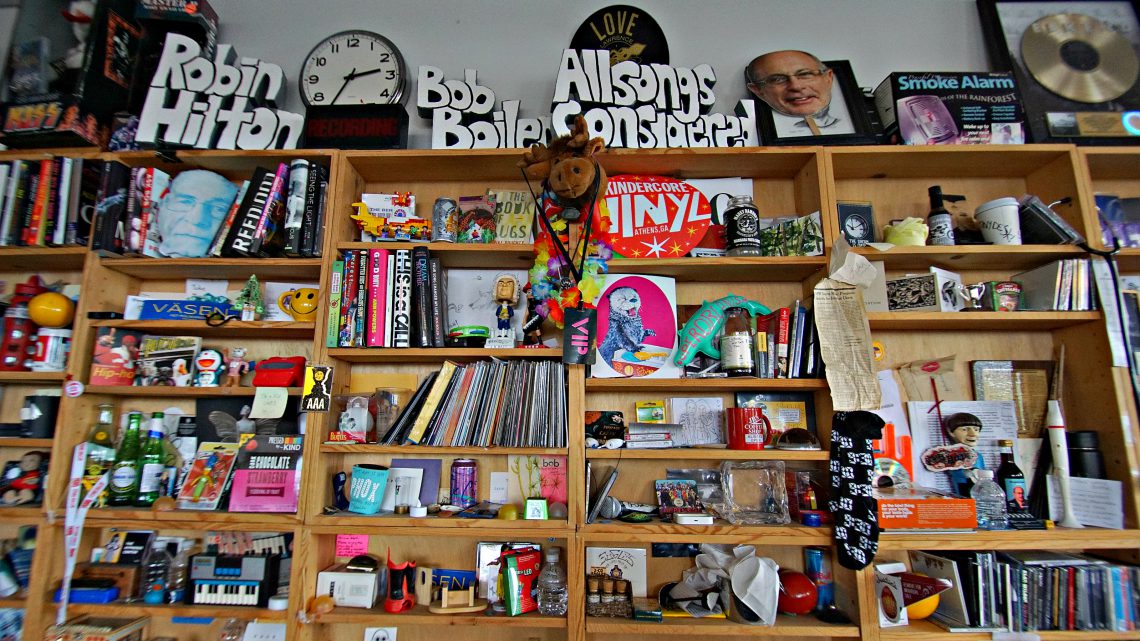 Who knew that such a small space could hold so much history and prestige. The space where NPR’s Tiny Desk Concerts are recorded can hold just a handful of people, yet just about every musician in the world dreams of performing in front of those cluttered bookshelves. That’s because very week, thousands (and sometimes hundreds of thousands) of viewers watch these performances on their phones, laptops, and tablets. There’s a sense of emphasis and influence that comes with being selected to perform on the coveted online program (Erykah Badu, Yo-Yo Ma, and the recently departed Mac Miller all have performances that were published just in the last month). In a sense, if you’ve been so fortunate enough as to perform on the program, you’ve arrived. 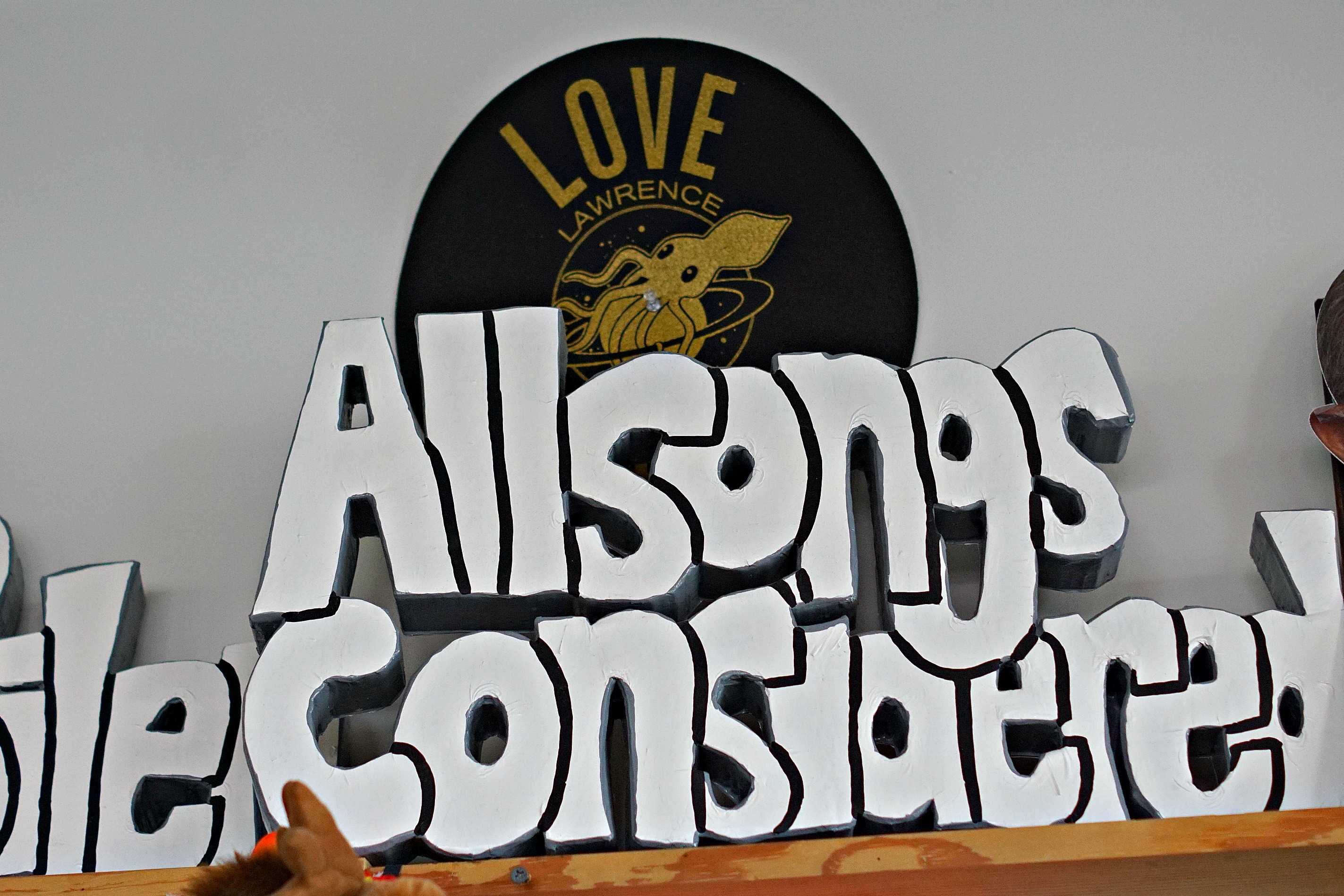 Though it’s called “Tiny Desk Concert,” the space isn’t really a desk in a room. In fact, it’s an open-office floor plan in the NPR Headquarters in Washington D.C. Behind the performers are rows upon rows of trinkets, books, anything that’s been picked up along the way and placed in the shelves (Lawrencians will be delighted to know a Love Garden slipmat sits on the top shelf above the “All Songs Considered” sign at the moment). Lining the outside shelves and cubbies are members of the production crew. Camera operators stand on boxes while producers quietly call the shots. Surrounding the spectacle are other NPR reporters, producers, engineers, and their friends. They make up the audience, and quietly admire one of the most unique performances they’ll see in their lifetime.

Though each segment runs generally under 15 minutes, it takes a lot to put it together. One of the head honchos is Audio Engineer Josh Rogosin. This is a job that requires him to think a little outside the box due to the acoustic nature of the performances. For someone who works in recording, he has to take a non-recording approach to each show. “There’s no monitors or headphones, it’s as if we’re going back in time 50 years before the art of recording and multi-tracking and all that stuff,” he says. “What did people used to do? People used to make music before all this tech came about and sit around the campfire. So often bands say ‘What do you mean, we can’t have monitors? What do you mean there’s no PA? How are we going to hear each other?’” 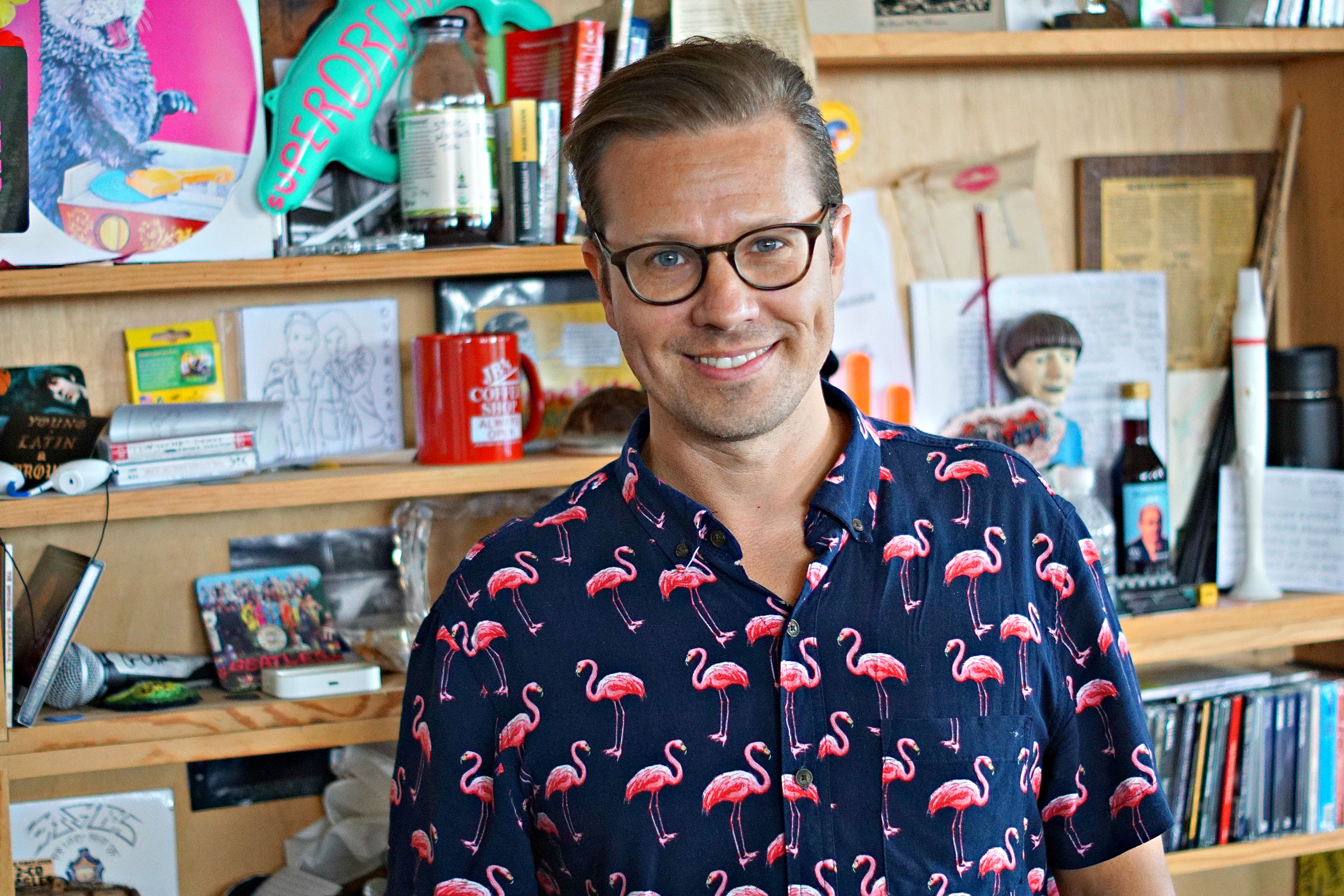 Rogosin notes that once musicians start adjusting their own levels, they realize how in tune they become with their bandmates. “It’s amazing, once you strip away all the technology, all of the mixers, or a bunch of volume dials, once you actually just listen to each other in a room, it changes the whole dynamic,” he confides. “It makes everybody play differently, it makes everybody listen to each other differently.” Rogosin does credit the live audience with being a huge ingredient to the success of the series. “It just becomes the human experience of hearing music together and stripping away the tech, but that’s where my job comes in as audio producer,” he says. “I still have to compete against every music video on YouTube, and that’s a tall order. But I make it natural, but enhanced. Natural plus.”

Though he only started working with Tiny Desk three years go, Rogosin has already been pushing boundaries when it comes to live performance. With a background in a theatre, he was eager to bring that aspect to Tiny Desk. The opportunity finally came when one of his favorite musical acts, Blue Man Group, stopped by the studio. This is arguably one of the most memorable performances from the show, so we embedded it below. The clip is delightful to watch. It’s full of action, yet still campy (as almost anything with Blue Man Group is). The show begins with members of the group running amok throughout the NPR offices, grabbing cables and stealing gear from on-air personalities. It all leads to them using these materials for their performance. Since Rogosin was already a tremendous fan, he was all up for their schemes and ideas. “That was an incredible collaboration with their entire creative team,” Rogosin recalls, detailing how they brainstormed with the band’s entire creative team. “I said if we do this, I really want it to be unique. That’s why we did the video that precedes the actual concert— them arriving on the loading dock, they’re on the box truck, the gate opens, they run around the office, they invite people to the tiny desk concert.” 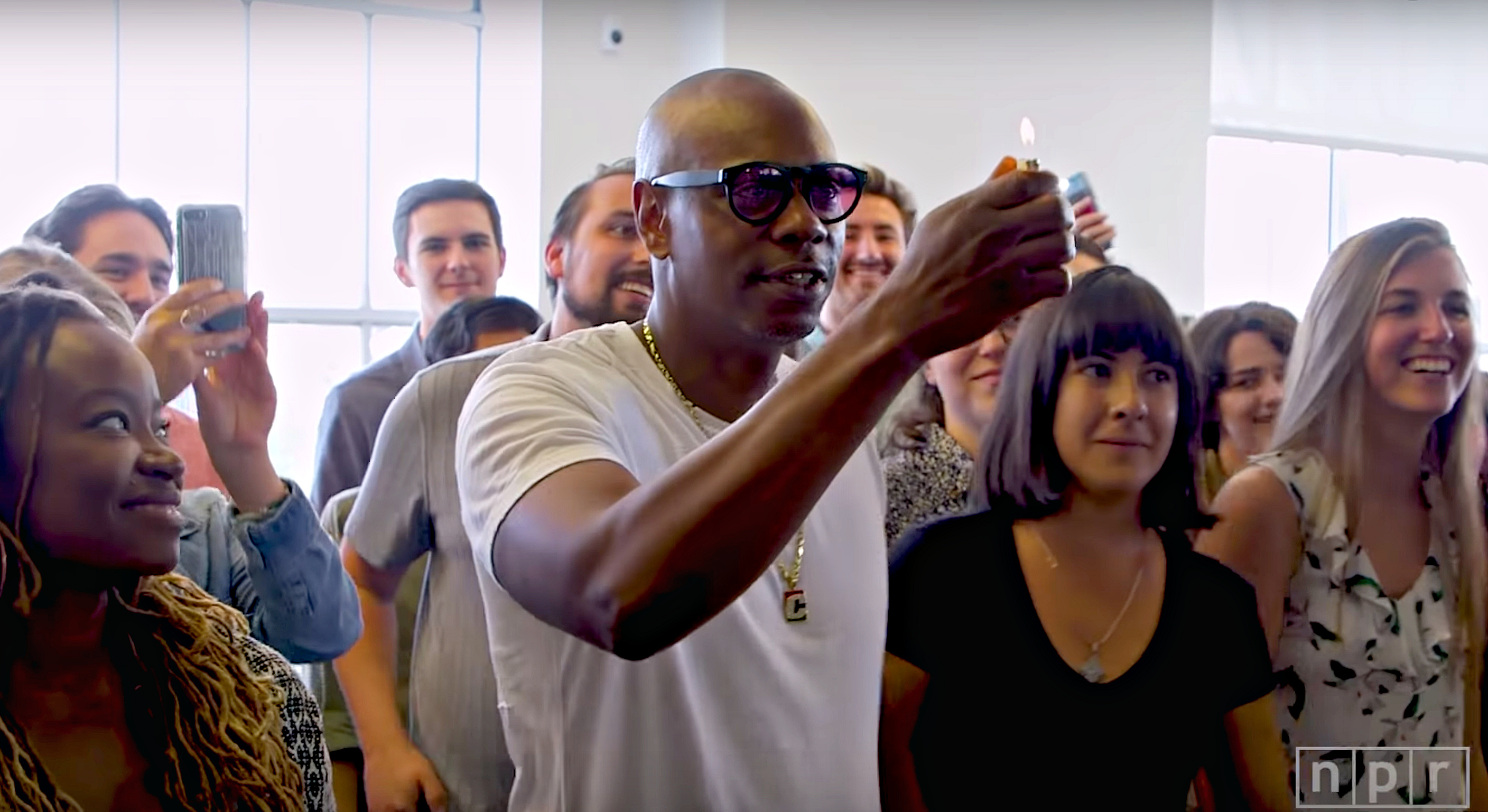 Rogosin also recalls having to switch things up when Dave Chappelle stopped by to guest host Frédéric Yonnet’s session. “He did some comedy bits. We shot some b-roll of him in the audience dancing we cut into the actual show, and it’s pretty hilarious,” he says. “I gave my my lighter and was like ‘You gotta hold up my lighter,’ and he hammed it up. Something you wouldn’t expect at the time.” Though Rogosin revels in the unexpected, some were more challenging than others. When Moses Sumney’s crew came through, the first thing they spotted was a piano against the windows of the office (far from the Tiny Desk performance area). Sumney’s eyes lit up and he indicated he wanted to use it in the show. “Our producers came up with the idea of hey, let’s just leave the piano where it is. If you watch the Moses Sumney video, it starts really beautifully with the mute pedal engaged, so it’s the really muffled piano sound at the top, and you see him singing beautiful at the piano. Then his band starts playing and he literally walks across the office through his audience and continues his concert after the piano intro. So I had to have two different setups, the piano mic and room mics over there, then I had to have another full setup behind the desk.” Even on the day I Heart Local Music stopped by Tiny Desk, Rogosin was grappling with new challenges. Opera singer Anthony Roth Costanzo was in with a rather large instrument that had to be brought in via the freight elevator. “That was the first time we’ve ever done a harpsichord.”

These types of tribulations only result in memorable value, and that’s exactly the type of quality content the world has come to expect out of NPR’s Tiny Desk concerts. It’s why every year, when they open up submissions for bands across the country to perform on the influential program, they’re left poring over thousands and thousands of submissions. But Rogosin believes in his work and the significance it brings to the public. “Music brings so much joy into people’s lives, but I think what we add to that equation just has to do with live performance and the experience of having a shared experience,” he stresses. “The music in this context brings people together in a way that is extremely unique by stripping away things like a PA and a sound system, it’s almost like we’re leaving the interpretation of music and levels and balance of things to someone else. We’re almost eavesdropping on them jamming, and I think that’s what we bring to music that is different than a beautiful, recorded-in-studio performance. Tiny Desk is different, and it’s super special. It sounds really trite to say it, but it can be an incredibly emotional experience to hear a voice in a room with nothing between you and it.”

For all the Tiny Desk Concerts, check out NPR’s website at https://www.npr.org/series/tiny-desk-concerts. If you need help navigating all the performances so far, Rogosin has graciously listed his favorite episodes below:

On the day we visited Tiny Desk Concert at NPR, Anthony Roth Costanzo was performing. You can watch that clip below:

Next post Billy Idol brought the rebel out in Kansas City