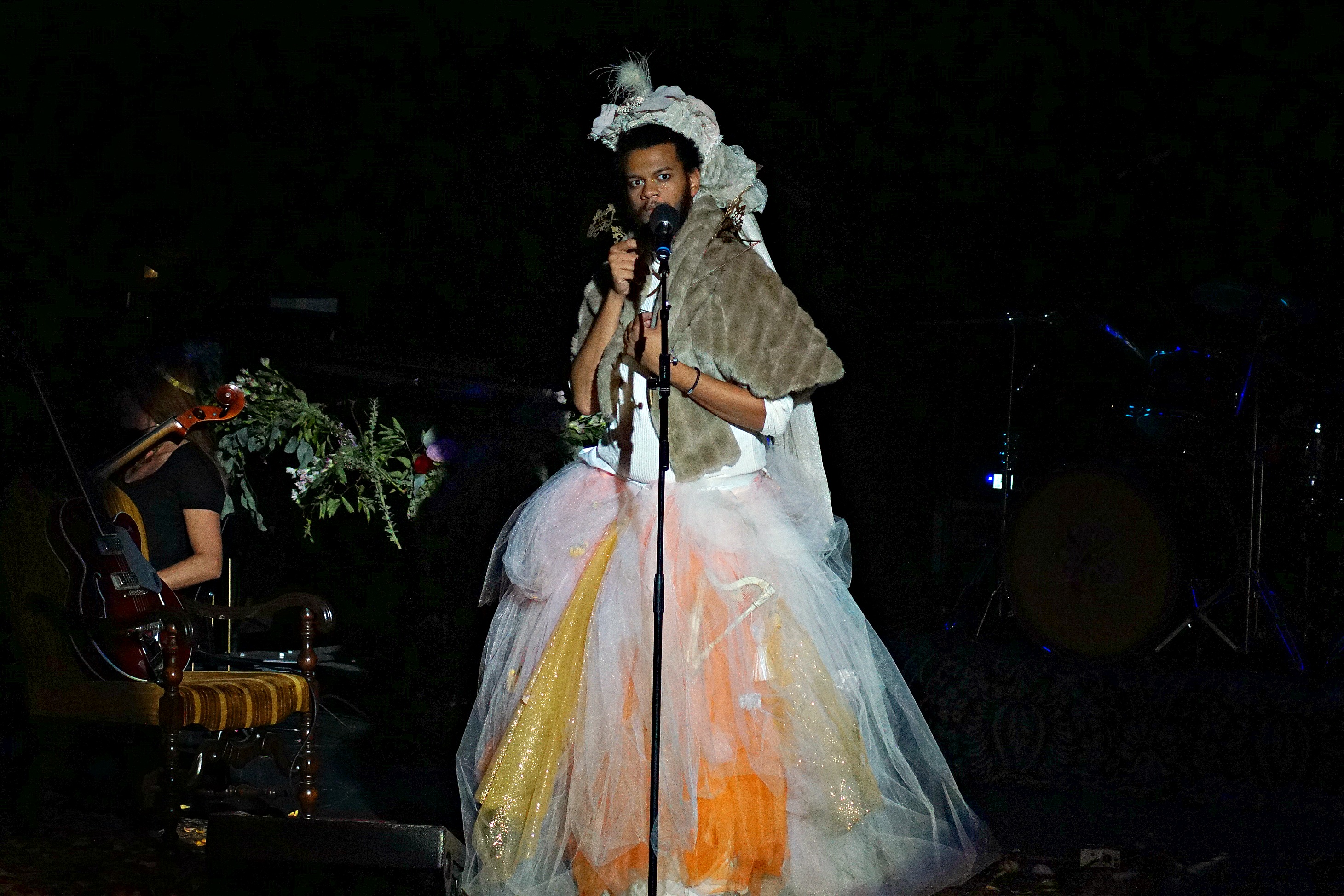 It was one of the grandest spectacles of the year. Dancers, half-nude men sawing wood, and an entire string section were just some of the ingredients in the outrageous production that poured out of the Gem Theater for Calvin Arsenia’s album release show. For an artist so outrageously delightful, we didn’t expect anything less.

Calvin Arsenia doesn’t just turn heads, he turns the arts world on its head. The saying in Kansas City among industry folks is that Calvin doesn’t play gigs, he makes events. He hasn’t been shy about leaning towards dramatics and theatrics in the past, so when the opportunity came to celebrate his latest release, Cantaloupe, he went full Calvin. By now, his fans have grown enough to fill the Gem Theater. With tickets running anywhere from $35 to $100, they showed up with bells and whistles on. There were capes, feathers, jeweled headpieces, and sequins all over that audience. It was like New York Fashion Week, and there was a hint of cantaloupe in the air (thanks to the fruit laying on the merch table). Calvin’s gender fluidity presence was everywhere, from the eye candy of high fashion to the smell of the fruit that inspired his album’s title.

He started the show the same manner as his career: solo, seated at a harp, and recounting his love for his hometown. At the end of “Kansas City, Baby,” the statuesque performer with an oversized Sia-esque bow masking his face stood up and opened his jacket to reveal a shirt that read “Thank you Kansas City.” This had the audience erupting in cheers and yelling “816!”

From there, the display only got more grandiose. Soft and pulsating lights, breezy projections, and silk strewn from the ceiling set the tone as the curtains flew open and revealed a full band. There was a string section, horns, backup singers, the works. The mood was as soft and flowing as his flower petal-filled tulle skirt. It was less like a show, and more like a musical or play.

He wowed with covers of popular songs by Bjork, Solange, and Radiohead. The latter was a particularly exciting treat because it was performed via a duet with a rare appearance from Krystle Warren.

But it was his eight-minute rendition of Britney Spears’ “Toxic” that took it to the next level with a team of tango dancers getting very hot and heavy aaaaallll over that stage. It was overly sensual and dramatic, and intensely reminiscent of the Argentinian’s “Roxanne” in the film “Moulin Rouge.”

By Act 2 (yes, this spectacle had an intermission), Calvin emerged from the fog and sang in French. There were several costume changes, but at the end of the set he appeared in a getup reminiscent of Glenda the Good Witch, leaving the audience gasping in awe, while string players appeared in the aisles and closed out the night with the album’s title track. There was, quite literally, music in every single direction.

It’s no small feat to bring this much Kansas City pride into a room. Calvin’s audience is predominantly well-to-do white folks, but it was important to the performer to have the show at the Gem Theatre off The Paseo (rather than, let’s say, the sometimes very racist Power and Light area). The Jazz district has a rich history in this neighborhood, and cultures collided when music erupted in the streets at the end of the show. Leave it to Calvin to have a parade waiting for him at the end of the night. Fans followed the drumline outside and around the block, phones in the air, cheering and dancing. If you weren’t into jazz before, you are now– Calvin will be the one to convert you, and he’ll do it with a whole lot of glitter, glam, and glitz.

Mac Lethal rapped about the Theory of Relativity