Doo-Wop Departure: Dean Monkey and the Dropouts bid farewell at the Replay

Doo-Wop Departure: Dean Monkey and the Dropouts bid farewell at the Replay 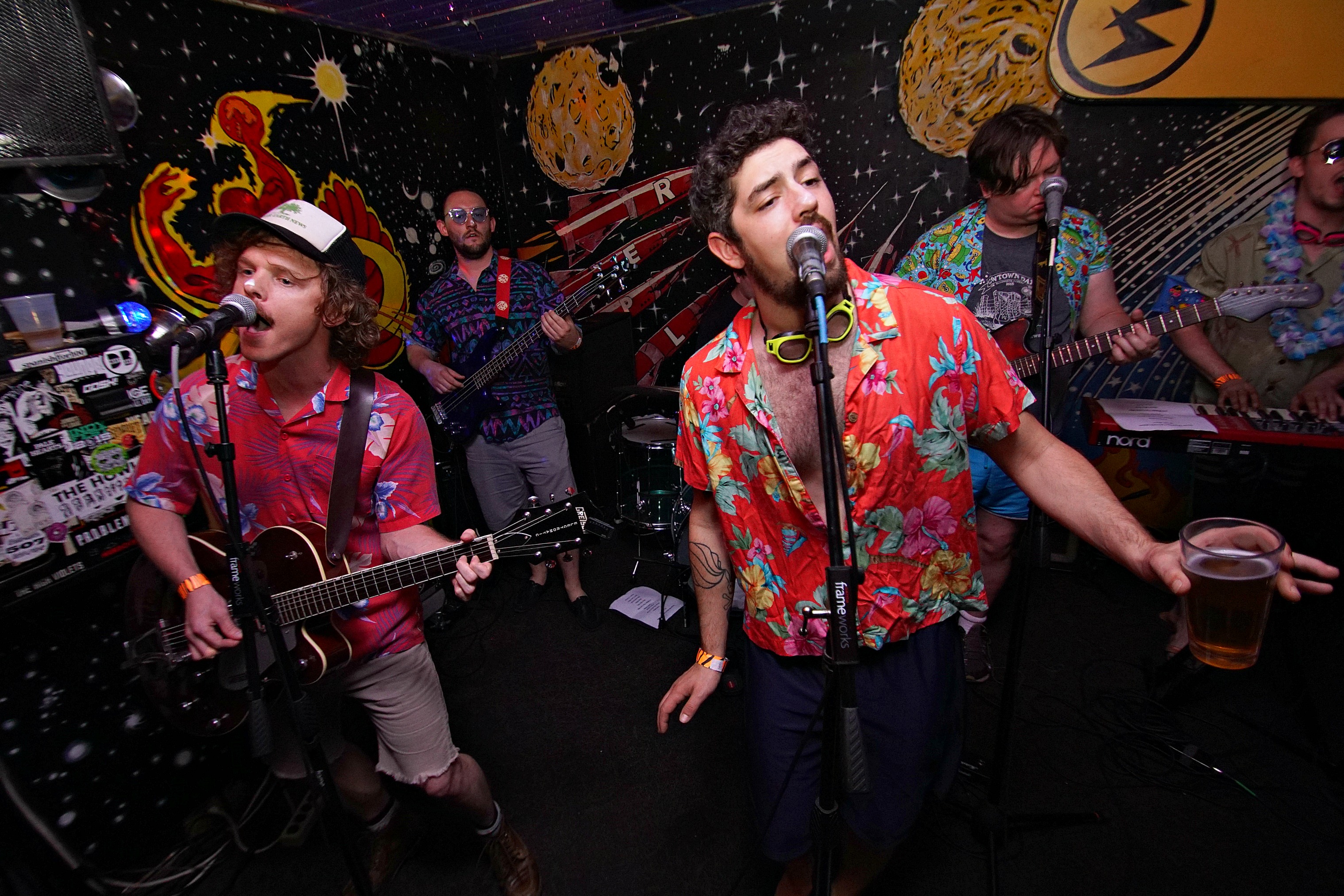 They came in looking about as Summery as one could. Each member of Dean Monkey and the Dropouts was decked out in their finest beach wear. The doo-wop band is no stranger to coordinating their outfits; they’ve done so for years, always with a different theme. Friday night at the Replay was no exception, as each member donned Hawaiian shirts, arm floaties, and even a light dab of sunscreen on the nose. It was a stylish display, but also a painful reminder that as much as everyone loves the Summer, it eventually has to come to an end.

The same rings true for one of Lawrence’s most beloved bands. Friday night’s show was their farewell to Lawrence. Over the past few years, they’ve brought their essentially crude flavor of doo-wop to the town, marking themselves as one of the most LFK acts around. When the town first heard of Dean Monkey and the Dropouts, they were performing in a sewage ditch (fondly known as “The Church of Malt Liquor”) in their underwear. That was seven years ago. Since then, scenesters have fallen head over heels in love with the peculiar group. Their smooth harmonies and pleasant guitar riffs sounded dazzling and delightful, but their lyrics were foul and highly sexual in nature. This was part of their allure, their exclusivity. Only a band like Dean Monkey could romanticize a song about a nut sack, as they do in “Blue Balls.”

The farewell show was a special one, featuring cameos from Joel Bonner and Chris Luxem, who gave an exceptional performance on their cover of “Not Ashamed.” The many-membered band crammed onto the small stage that has seen more performances from them than any other venue, yet they found room to constantly shuffle about while they switched the lineup. Ben Sauder hopped between guitar and keys, Sam Michie belted at the mic after flaunting his piano skills, and Daniel Barkofske switched it up between bass and wow-wielding falsettos that left the audience gasping and cheering. Max Yoder, the mainstay who started it all after an early obsession with doo-wop, remained strong and silent in the back. The night was made even more special as it served as both a farewell show and a release show for their final album, Love Is A Hate Machine. The musicians, always leaning towards the unconventional, released it exclusively via enamel pin and download code (beautifully designed by drummer Nicholas Stahl).

The audience savored Dean Monkey to the very last drop, beginning the set with some swinging and swaying, but ending it with a full-on dance party. Fittingly, they ended on “Dean’s Theme,” a powerhouse of a ballad that utilizes every possible skill from all the musicians onstage. Even the last note of their swan song is a sustained one, a long goodbye that had the guitars, keys, and drums frantically vibrating while all the vocalists held onto their final note as long (and as loud) as they could. They ended the way they began, turning heads and winning over hearts. Dean Monkey was a special one, and Lawrence was lucky to have them as long as they did.