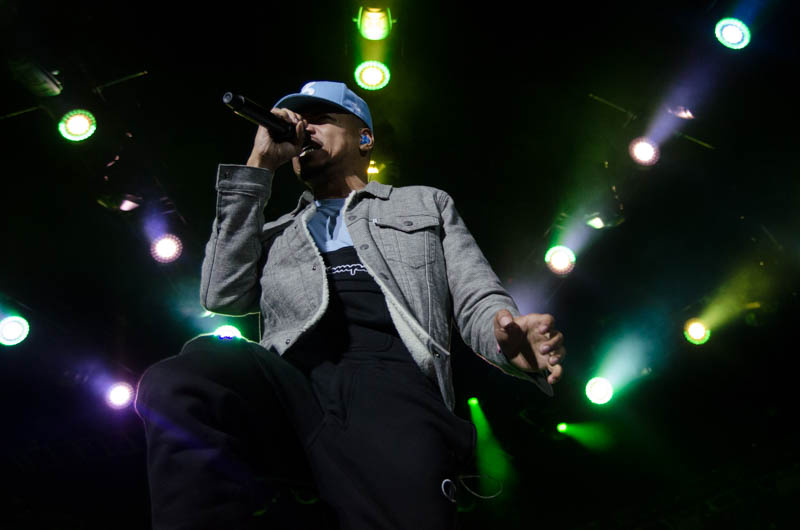 Arguably the best performer of the moment, Chance The Rapper had a message to spread to Kansas City. He spoke to “the path” he’s been laying out, a sort of transformation he’s seemed to go through in the last year– and the show was a celebration of that journey, fittingly on the one year anniversary of the release of his historic Coloring Book mixtape.

The first artist to win a Grammy for a freely given, streaming only mix tape, Chance Bennett clings to his Midwestern ideals. Radiating thankfulness and gratitude through the entire set (despite mentioning his Grammy a number of times and even splashing a cartoon of a Grammy across the enormous screens behind the band) he referenced Chicago, family, even his Auntie Kim who passed away only this week. Moments of the show were intimate with low lighting, piano music, and earnest sounding chatter where Chance was clearly working to a crescendo.

The set ran heavy with tracks from their newest album; Chance was backed by his touring and recording band, The Social Experiment. The hits off 10 Day and Acid Raps were early and run together to get through, presumably to what Chance must believe, is his most important work and the tool he’s using to convey his new message.

“I want to get to heaven; and I want all you guys to get there too,” Chance told the crowd Saturday night. “Whatever it is to you, I mean,” he qualified, sticking to his classic ‘it’s all love,’ message. His talented, choir-like backup singers and the music laced with powerful gospel couldn’t help but inspire. His themes of childhood (maybe inspired by the birth of his daughter, Kensli), family and respect of elders coupled with backgrounds drawn to look like Saturday morning cartoons are a breath of fresh air in a weird moment in the world. Makes me want to call my mom and tell her I love her.