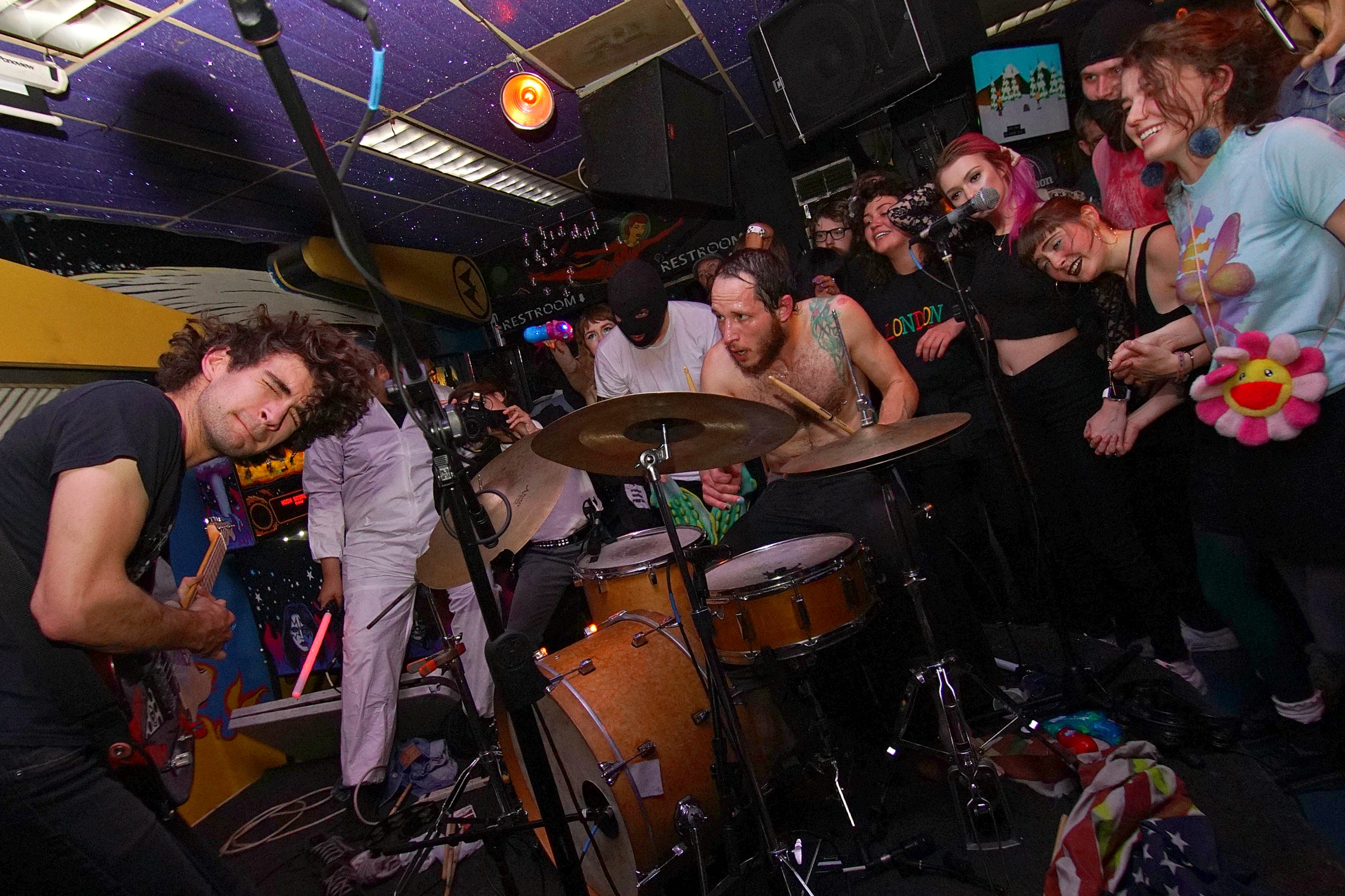 If you are familiar with Lawrence bands and happened to be at the Replay on Friday night, congratulations— you have seen Arc Flash at their Arc Flashiest.

The band known for wild stage antics, heart-racing numbers, donning space suits, and holding a finesse for weirdness may very well have reached the height of their antics at their release show that night. The only thing left for them to do now is to grow in popularity across the nation (highly likely, considering their nonstop tours and appearances at local festivals) or shoot off into the sky and explode into stardust.

They pulled out all the stops for the already stuffed crowd. The two-piece noisemakers, hot off a tour and festival appearances (they turned a few heads along the way), armed their fans with gadgets, lights, noisemakers, tambourines, and bubbles. The bubbles were everywhere, and somehow lasted nonstop through the end of the encore. Some fans gussied up, others wore devil tails and monster hands. Everything about this set was unconventional. The drummer didn’t even sit on a stool, opting instead to balance himself on an amp.

Even though this was an Arc Flash show heavy on the Arc Flash antics, you can tell James Thomblison and Mark Osman have been very focused, concentrating on turning their noisy garage rock thrashers into thrash-worthy and instantly memorable ballads. They ditched the heavily distorted and pitch-adjusted vocals for Thomblison’s knack for Thom Yorke-esque wails, and let the fans do most of the weirding out for them. The shredded American flag they normally tout at their shows? It was thrown to the wolves in the crowd, as were some percussion instruments. The band was now one with the throbbing, pulsating monster formed by the audience— and for a few moments comprised of rapid, two-minute psych punk ragers, everyone was on the same page.

They were joined by Wendy Moira, who came armed (finally, yay!) with new songs for their doting fans. Baby Birds Don’t Drink Milk followed, with songs that transitioned from lazy summer tunes to heavily distorted and frenzied riffs. Condor & Jaybird may be a band out of Iowa, but they are well-loved in Lawrence (this wasn’t their first appearance in town). This was the most fun you could have with headbanging at something that wasn’t a metal show— and there was a lot of headbanging going around. The hair! The shrieking! The dramatic buildups! It all sent the crowd’s energy through the roof just in time for them to lost their damn minds with Arc Flash.

We felt compelled to let you know that this is going to be a very cool show.

Great piece from @heartlocalmusic on the new album and our 12/3 show at @TheBottleneck in Lawrence, KS! https://iheartlocalmusic.com/2021/11/30/the-vintage-virtuoso-neal-francis-is-bringing-nostalgic-cool-and-piano-rock-to-the-bottleneck/