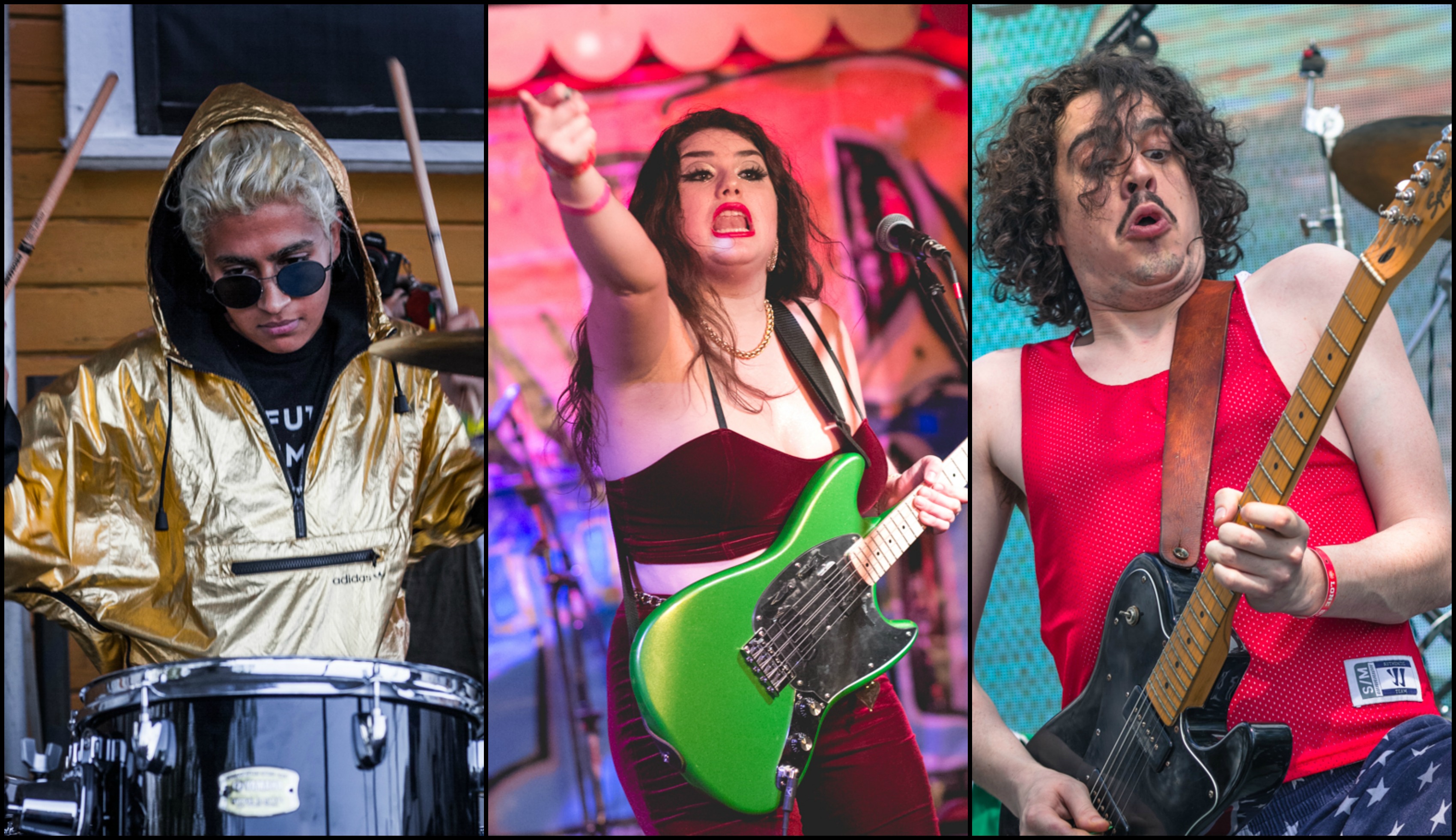 Editor’s Note: We sent photographer Leroy Pristach down to SXSW to see what Lawrence and Kansas City bands were doing this year. Here’s a look at some of the best acts he caught while he was down there.

Drugs and Attics – I saw this band twice. On purpose. Set aside the fact that 40 hours of straight partying would make most other bands phone in their performances, and that William Jordan, Andrew Paluga, and Brett Livingston have real strength when it comes to song writing. The camaraderie of these guys is palpable. Mix that in with the dad jokes, three-pack-a-day vocals, and stage craziness of the frontman, and it makes a person need to see Drugs and Attics twice. Especially if the first time is in a hipster pool hall with sub-par sound, and lighting literally anywhere and everywhere except for in the exact area the venue decides to place the band.

Vigil and Thieves – Smoky vocals, punk rock attitude, and feminism. Three key ingredients for any band looking to hold my attention (and we all know artists are keeping themselves awake at night thinking of how they can keep my attention).  I’ll admit, I don’t really think that frontwoman Sarah Storm’s smoky vocals were all too intentional. Don’t get me wrong, Vigil and Thieves has a raw quality baked into their tunes. However, there’s quite a lot that goes on at SXSW that’s not necessarily the best thing for a singer, and in my most humble of opinions (humble because it really doesn’t matter. You do what you want!) whatever worked over Storm’s vocal chords helped make the overall performance. Storm really squeezed the blood out of the tunes, turning “raw” to “Raw” for sure.

The particular showcase in which I caught the Radkey brothers was one of those showcases only open to wristband wearers (expensive, even for press) and badge wearers (rent for my two bedroom house is cheaper). It was an intimate, house-party-esque event hosted by SPIN Magazine where band members, tour managers, and A&R hang out and watch performances from the floor just like they’re real people and they trust me to not take hostages or something. I mention all of this because Radkey is badass… a fact that we all know from countless shows, and years of watching these guys grow, but a fact that, until this showcase, was lost on the two hot-shit, A&R reps I happened to be standing next to. It’s nice to see local boys doing what they do best while watching the faces of these two reps go from “interested” to “fucking interested.” Who knows what kind of decisions these decision maker types are allowed to make, but I hope the shared looks of awe, the pointing, the miming of explosions, and the mouthed “I love them!” Leads to more good things for these guys. We all know Radkey kicks ass. Maybe more of the “right” people are in on it now, too.

White Fang – This list kicks off with one of the best party bands around. Don’t get me wrong, there are a lot of really entertaining “drink ‘em up/ smoke ‘em up” sort of party bands out there, but the LA, DIY Punk band White Fang really seems to own the vibe while at the same time never coming off as pretentious. I was lucky enough to catch these guys at their one and only performance at SXSW as White Fang, and I’m so incredibly glad that I did.

The shirtless, bong-hit and coughing fit miming, “I want my Mommy!” crying stage show antics accompanying songs with names like “Wrecked” (about getting, well, wrecked) and “Pissing In The Driveway” (that one’s self-explanatory) were worth every bead of sweat I produced and collected from others.

Les DeuxLuxes – This rock-n-roll duo hails from Montreal, which is sad in a way since they could really show a lot of American, Classic rock-vibed bands a thing or two about how to be badass– and with the most minimal of set-ups to boot! While guitarist/percussionist/back-up vocalist Étienne Barry lays the most concrete of foundations, Front-woman/guitarist Anna Frances Meyer simultaneously slays the audience with her skills on the ax and pours honey on their wounds with vocals piped down from the gods above. And to think, I only caught their act because they were the fill-in band for the band I was set to see. Who was that band anyway…?

Cherry Glazer – Wild. Wild is a mild term compared to how incredibly punk rock Cherry Glazer’s Clementine Creevy is. Creevy doesn’t walk on stage. She crawls with eyes and moves like a wild animal, practically slithers up her mic stand and gives the crowd an aggressive growl before opening up a fresh package of grade-A rock-n-roll that was incredibly difficult for me to focus on photographing. IT WAS SO GOOD!!!

PWR BTTM – My SXSW is built upon cool names and happenstance. There are just far too many performances from bands I’ve never heard of to make any real, educated schedule. So I go by name and get lucky from there with who might be playing directly after or nearby, except concerning PWR BTTM. PWR BTTM (Power Bottom) was one of the few bands I actually listened to prior to adding them to my schedule… in 2015. I was so stoked to catch their set.

The glam, the politics, the music were all right up my ally, but alas, I had to bump them in order to catch some other band that was more important to cover. Who was that band? I don’t know. Not a memorable performance obviously. What was memorable was the fact that I missed out on seeing these guys/gals/non-binary performers for not one, but two years! Was it worth the wait? Would I see them again? Does the Pope… you know… in the woods? Yes. The answer is yes. PWR BTTM’s brand of rock is funny, witty, and punk, and the fact that they’re making it all happen as one of the most up-front and out there LGBTQ artists around should make us all happy.

Walkings – If there’s one event you have to see at SXSW every year, that event is JapanNight. For those of you out of the loop, Japan has, amongst others, a thriving, hard-core, traditional rock-n-roll scene (and the most beautiful denim you’ll ever lay your eyes on) and Pop and boy-band scenes that aren’t to be trifled with either. Taking said truths to be self-evident, JapanNight is the event to catch some of the strongest indie acts Japan has to offer. Last year I witnessed a masked man strip through 5 different layers of superhero underwear, cover himself in ketchup and mustard, then proceed to use the dance floor as a slip-n-slide (rockabilly is nuts!) This year wasn’t as crazy, but that doesn’t mean it wasn’t good. And Walkings wails! Mixing original material with lyrics in both Japanese and English, with Jimi Hendrix covers made their own, this trio of incredibly talented musicians puts on one hell of a show. They didn’t strip or cover themselves in condiments, but they were still damn good.

Madame Gandhi – I’m ending this list with the one performer that really stands out for me. As messengers go, a lot of bands and artists really muck it up. I find it so aggravating to feel in such strong agreement with an artists message while having a simultaneous loathing for the music, stage show, and general artistry itself.  Some activists just don’t make good music.

With that said, Madame Gandhi (Kiran Gandhi) absolutely does not fall into the aforementioned “muck it up” category of artists. She bills herself as an Electronic musician/activist, but she’s so much more than that. She’s an inspirational feminist activist, an electronic musician, a very talented drummer (formerly of M I A,) and a singer/rapper. But what makes her stand out to me is how she, as an artist and musician, manages to put all of these elements together so well in a live performance. This woman is a beast! She raps, she sings, she drums, she hypes the crowd and makes them want to conquer the world for her. And she does it all at the. Same. Time. And with tunes that don’t suck! WHO KNEW! The Future is Female, and Madame Gandhi is the perfect ambassador for that message.

Winter – Specifically Samira Winter. For writing songs about her pet cat. I like cats. A lot. The music was good too.

Gizzle – For being an incredible artist that not only positively owned her set, but had a happiness about her that the entire audience couldn’t help but be infected by.