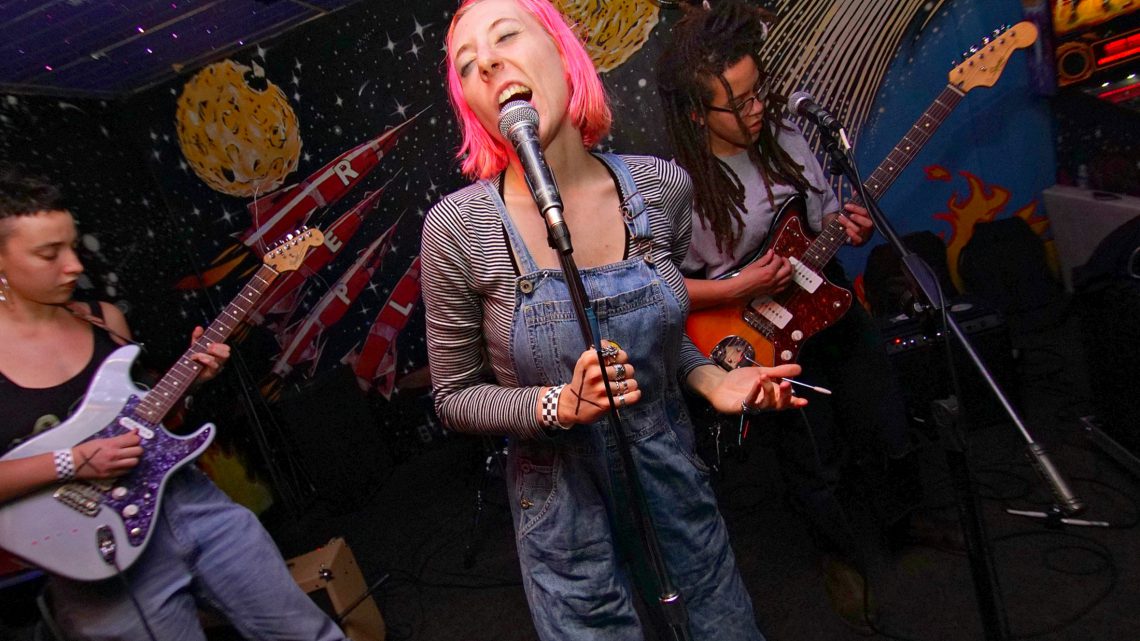 You’d have to be an awfully special band for the Replay to push back karaoke night. Leggy is that special band.

The Ohio rockers served up bubblegum chic realness at the venue on a Monday— a weeknight that seldom sees shows in Lawrence yet had a great turnout. With a strong local fanbase, they came loaded with new music. They also served up a set with their original drummer— a treat since Arc Flash’s Mark Osman normally steps into that role (which he did anyway about halfway through the set).

Leggy is currently on tour with T-Rextasy, a New York band that was absolutely merciless when it came to tearing down the male ego. They channeled all the best traits of 50’s and 60’s girl doo-wop groups while simultaneously providing just the right amount of feminine snark (a must-have commodity in bands these days) when they tackled “gap year boys” and boys in high school bands. They seamlessly switched from poppy grooves to punk growls in the blink of an eye— and even with sudden changes in tempo, they were easy to dance (or thrash) to. If this were the 90’s, T-Rextasy surely would have been one of Katarina Stratford’s favorite bands in “10 Things I Hate About You.”

Let’s hear it for Westerners, who opened up the show and surprised us with what they’ve been up to lately. This was their first show with a new drummer, as well as their first show in a long while. The time off must have done them some good, because they’ve made the jump from your average college rock band to a group of musicians capable of making something truly beautiful. Westerners are a lot more harmonious now (but still maintain their fierce edge), with frontman vocals so beautiful it would give Jim James a run for his money. Even their older songs sounded new, and this likely won’t be the last of their Cinderella-like transformation.

Next post KSDB-FM is doing everything right with local music