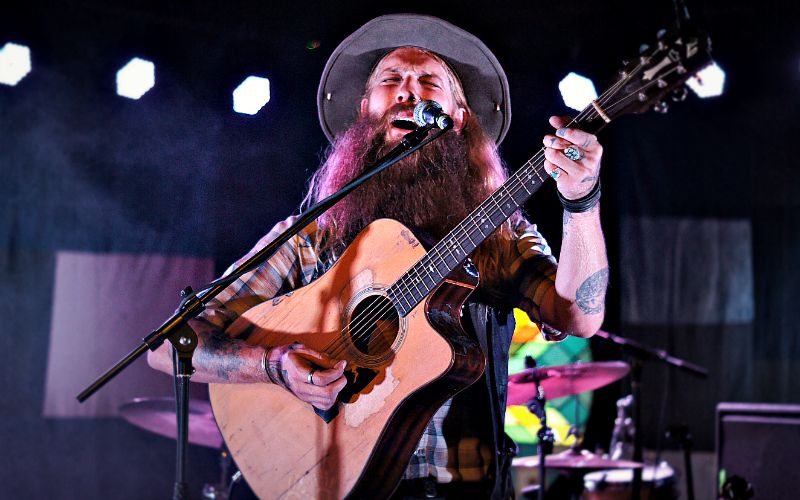 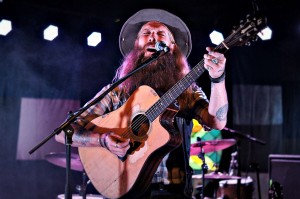 All week, Tyler Gregory had been in high spirits. He was constantly talking up his upcoming show around town, an event that would reunite him with a band he hadn’t played with for nearly two years. Turns out all that talk amounted to something spectacular.

After Rolling Foliage played a lively set on a very decorated stage, Tyler Gregory and the Bootleg Band (formerly Bootleg Bandits) joined each other on a stage, rather than a patio, under saturated and moody lighting. The women fluttered across the venue in billowing, flowing skirts, the men scratched at their leather bracelets, and shoes were optional. The band began with a hauntingly beautiful song, accentuated by an eerie introduction from Paul Coleman’s fiddle. That fiddle wouldn’t stay quiet for long, though. Eventually it conjured up even the quietest fan to get down and boogie a little. 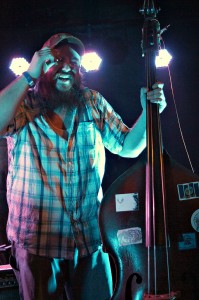 Before long, the musicians onstage had some guests. Some friends stood on either side of the stage, and began throwing what seemed like endless amounts of confetti and tinsel at the crowd. The floor was covered in it, hoopers were dancing in it, and everyone was feeling the love (because that’s how bluegrass works).

The band was apparently feeling it, too. A couple of songs in, the bass player got so wild he actually broke a string. This isn’t like when you break a guitar string. It’s not like you actually have an extra upright bass laying around… except they did. Tyler asked the audience in a half-joking manner if anyone had an extra bass on them, and sure enough a couple of folks did. It took one acoustic song later to retrieve it, and the band was back in business. Tyler organized everyone in a round of applause and announced “We’ve got a bass! I told ya this was a hillbilly crowd!”

Watch the video below. When the smoke machine comes on behind them while he’s singing about the devil, you may get chills.