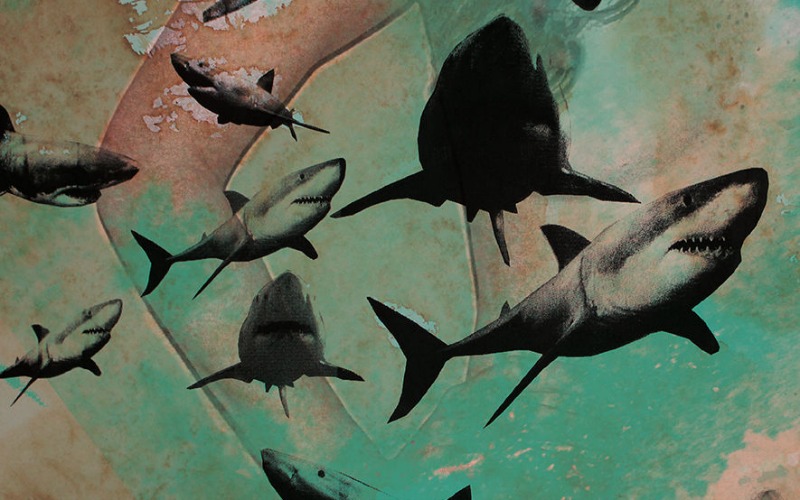 “She said ‘you’ll be fine,’ I said ‘I hope you’re right’/And under an empty moon we kiss goodnight…”
– Fourth of July, “Empty Moon”

I’ll give you a warning right off the top here, dear reader: this is gonna be more than just a run-of-the-mill review. If you’re only interested in reading my thoughts of the new Empty Moon record, The Shark, you can start scrolling down to the next set of italicized lyrics. Go ahead, I won’t be offended. If you read the review I wrote in the spring of 2013 for Fourth of July’s last record Empty Moon, you know I love Brendan Hangauer’s music and I tend to wander from the proper path when it comes to the review portion. So here goes the first part (you’ve been warned):

2013’s Empty Moon connected with me on a lot of levels. The songs about heartbreak and drinking to excess really hit me right in the gut. More than any other Fourth of July song or album, Empty Moon intersected with a lot of personal moments in my life. I loved that record and it probably goes without saying that it was my favorite of the year. I moved from Lawrence to Seattle before the band’s “final” show at the Replay on July 4, 2013 and it broke my heart to miss it. What a goodbye (and thankfully the editor-in-chief of this very site documented it)! But there was a message of hope in the darkness they left; Hangauer would be working on new music and under a new moniker; Empty Moon. 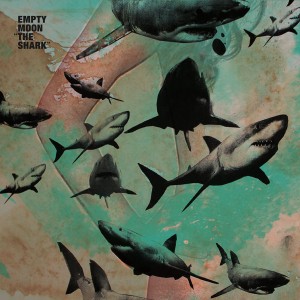 To do a side by side comparison of both musical acts would be silly, so I will avoid it at all costs (forgive me if I forget this though). I think it’s fair to mention the two acts together though, if only to show the progression in Hangauer’s career. After my first listen of The Shark, once again I found myself connecting to his lyrics and music. A transplant on the West coast himself, I can hear my own struggle with leaving everything I knew and the adjustments it takes to living in a new whole new region. Which isn’t to say that Seattle is the same as California, but the way Hangauer paints his portrait of the coast is relatable to all (even if you aren’t in the Pacific time zone). Anyway, you can probably guess that I love the new album. But here’s the review anyway.

“A million reasons you wanted to move/You said you wouldn’t miss the seasons, but now you do”
– Empty Moon, “Dear Life”

“I Would If I Couldn’t” kicks off the record with a soft strum before adding strong keys. A notable presence on The Shark are the piano and organ; they are prominent throughout. The familiar sound of Brendan Hangauer’s raspy coo delivers the lyrics of yearning. “Please answer me!” he exclaims, right before a rollicking electric guitar joins in. The buzzing rhythm is as warm as his delivery. The skews towards dark; relationships are always complicated and Hangauer describes them to a T.

The gloomy pop of “75 Degrees” provides a great image of this ideal beach environment with just the right amount of cynicism. “It’s been seventy-five degrees everyday now for weeks/It puts my mind at ease, replanted palm trees.” The beautiful landscape still has plenty of melancholy. After all, who the hell wants perfect?

The slow-burn of “Dear Life” is an incredible venture in homesickness and appreciating what you have/had. Adrienne Verhoeven’s vocals mesh with Hangauer beautifully (another Fourth of July connection). “Mr. Know-It-All, I bet you know which way you fall/Down in the gutter, think that’s cool/Surrounded by fools, not foolin’ anyone but you.” It comes to a rocking crescendo with a letter home and the organ purrs along.

Empty Moon breaks the folky streak with the new wave groove of “Maureen.” The songs bleeds cool with a thumping bass line and sleek guitar. How have I not mentioned the drums four songs into the record? Subtle, punching staccato, keeps this track fucking cool.

The stunning one-two punch of “Golden Mean” and “The Shark” have been on constant repeat for me. The former is a calm, sparse song with Hangauer softly delivering lines of regret (“I’m sorry about New Year’s Eve/I’m sorry about so many other things”) and this goddamn killer verse: “I pulled her heartstrings like her bikini top/“She walks away, she lets it drop/But she won’t say stop, she falls into my arms/She only covers up, cause her hair’s so long.” And the longing at the end of the track is just devastating; “Whatever we do/I’ll wait for you…” Hangauer and company repeat to a heartbreaking denouement. The title track is razor sharp (“And your mom said you’re only faithful cause you’re too lazy to change”) with Hangauer spitting lyrics out with a hypnotic spin until the group vocals kick in.

The Shark is just another excellent step for Brendan Hangauer and the first step for Empty Moon. An impressive “debut” from an already impressive artist. The high note that Hangauer left Kansas on is still ringing across these United States. Project to project, his streak continues.

Brownbackistan reminds you to vote

Watch: Various Blonde at the Replay