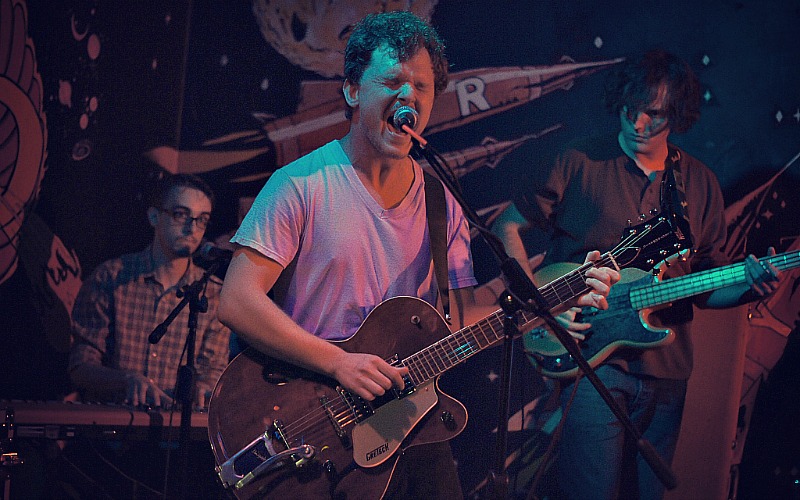 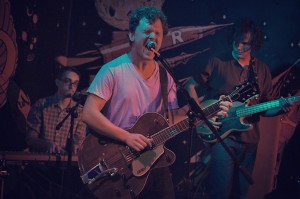 On Thursday evening, Sauder (performing as No Magic) had to interrupt a room full of excitable Royals fans with a solo acoustic set. If his songs weren’t so serene, he might not have pulled off the interruption. But he persevered gracefully through random eruptions of applause and cheering over the game.

The acoustic bit only lasted a few songs, though. Eventually Sauder was joined by a host of musicians from the Whatever Forever collective, performing for the first time as a full band. Backed by members of Karma Vision, Your Friend, and Dean Monkey and the Dropouts, you’d think more musicians onstage would mean a louder set. But this motley crew, despite their many members, kept the same even and smooth tone we’ve come to love from No Magic. It felt like a gentle breeze rolling through the Replay, lifting up the hairs on your neck and cooling all the sports tempers running rampant through downtown.

With every performance (acoustic or not), No Magic plays more confidently and spreads tranquility. You can listen to the most-excellent and recently released EP here. On the track “Rain Ghosts,” which No Magic performed at the Replay on Thursday, Sauder states “Life’s Meant To Be Enjoyed, Not Feared.” Lines like this, combined with gentle guitar plucking and light beats, really solidify No Magic’s stance as the gentle pat on the back of the Lawrence music scene.

Watch: Harry and the Potters delight fans on a rooftop