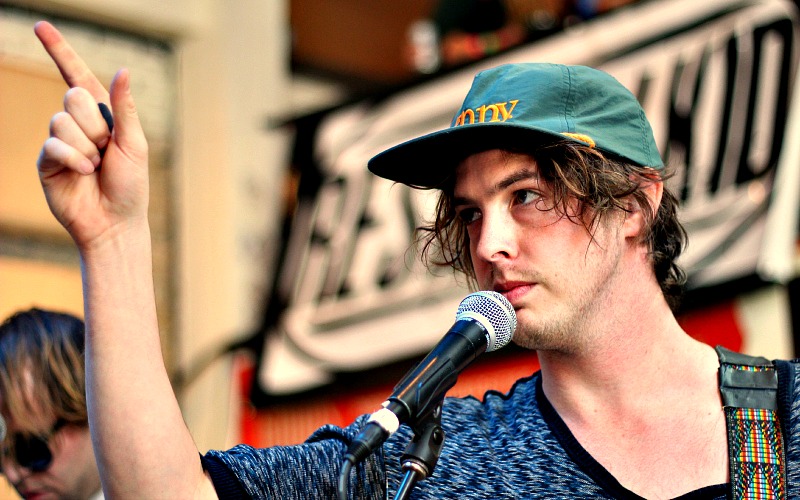 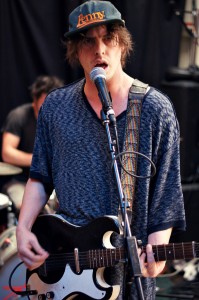 The Jackpot recently started framing flyers for their most memorable shows in recent history. Smack dab in the middle of them is one of Broncho’s many fast and hard bellows through Northeast Kansas. They have good reason for immortalizing that show. Broncho has been known to summon some wild performances. The band has caused a ruckus at Middle of the Map Fest, raised hell at the Replay, and gotten aggressive here and there. In short, the band is unforgettable.

Which is why it’s been a little quiet around these parts lately. After consistently hitting up Lawrence and Kansas City several times a year, Broncho’s shows came to a halt. But that’s about to change. They’re set to play recordBar in Kansas City this Thursday with Sneaky Creeps. The delay? Falling out of touch with a label and feverishly working to finish a sophomore album. “We started recording the record a year ago this past January, and we didn’t finish it in the amount of time we booked in the studio,” admits frontman Ryan Lindsey. “Then we ended up touring a lot and not having as much time to finish the record.” 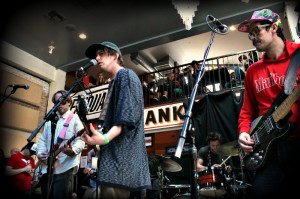 Broncho ended up finishing the record just in time to sign with a new label. In all, the band toured for nearly three years on just the first album, Can’t Get Past The Lips. This made them even more determined to finally wrap up Just Enough Hip To Be Woman. “Even though there were moments of doubt, it was smooth because we were busy the whole time. It all just kind of fell into place because of our time frame and what we had on our schedule,” says Lindsey. “I’m glad because we have these songs that ultimately I wanted to put out. That was the driving force on seeing this whole thing through. If we didn’t have another record ready, it would have been easy just to let it completely fall part after our label quit. But I think the fact that we were all into these new songs made it easier to push through.”

With the album set to come out on September 16th and a series of nationwide stops scheduled on their tour, Broncho now had a new task to tackle. “Some of the songs we wrote to play live, and we played them live before we ever recorded them,” says Lindsey. “But a lot of them we wrote and recorded in the studio before we even thought about playing them live. You always hope that people still like you when you’ve had good shows in a place, and then you go back and try something new.”

Chances are, trying something new won’t be a problem for Broncho’s fans. Their audiences tend to grow exponentially with every show, and the band eventually discovered they had a fairly diverse crowd before them. “It’s a mix between people that are drinking at a certain hour that make it easy for us to introduce ourselves, and also people that want to listen to music and don’t necessarily have to be fucked up to be entertained,” says Lindsey. “I feel that there’s more people telling us their children are more into our record than adults are.” At this point, Lindsey jokes “I think we may end up being a kid band before we know it.” 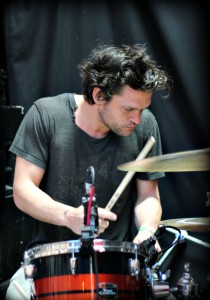 Making the Most Sense

Now, with a new record, a different band lineup, and an ever-changing crowd, Broncho heads out into the great wide open. Their Kansas City stop stands firmly in the middle of their tour, and they’ll be taking on this ambiguous chapter in their lives head on. “There’s always going to be uncertainty of the future to a large degree, so when you’re thinking about keeping everybody’s interest in something, that’s a challenge,” Lindsey concedes. “But we’re an easy crew and we figure it out. You gotta be pretty dumb as well. You gotta just be numb to a lot of it and make it to the other side.”

Lindsey doesn’t really have any other option, at this point. To him, plowing through with Broncho is what feels right. “Even though I have a lot of other interests and things better than music, this makes the most sense for me to invest my energy in,” he says. “It’s just kind of part of me. Wether it’s these songs, or another thing, I’m always going to be making a record or creating music. So if it’s not Broncho, it’s something else… and Broncho makes the most sense right now.”

You can see Broncho make sense of it all this Thursday at when they play recordBar with Low Litas, Various Blonde, and Sneaky Creeps.