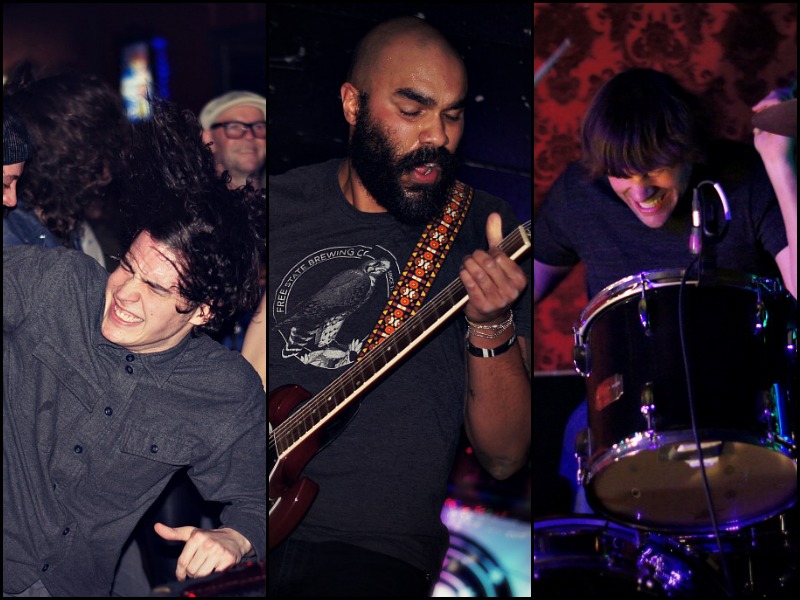 The first night of I Heart Local Music’s SXSW Fundraiser felt like a party. The second night, however, felt like family. 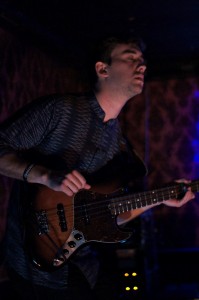 Fridays are normally filled with wild-eyed folks looking to kick start their weekend. So naturally, Saturdays tend to start a little more lethargic. But it didn’t take long for the sluggishness to evaporate into the steamy Jackpot air when four local favorites took the stage.

Haunt Ananta started the night off. The young group is wildly popular with KU students, and are known for being just so darn charming. They’ve been hard at work pounding away at practicing and recording over at SeedCo, and it shows. Fans came for their charisma, but stayed for those strong vocals and lively onstage antics. 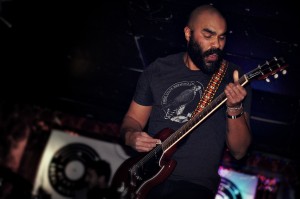 Black on Black is a band that should be booked on any lineup looking to wake an audience up. They’re vicious and savage, delivering nonstop diabolical rock throughout their set. If you were unsure about the state of rock and roll in this town, you need to look no further than a Black on Black set. They have a song about Lawrence that tends to bring out ferocious behavior in even the most deprived music lover. 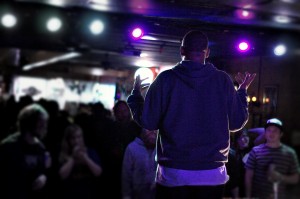 Where Black on Black fills an audience with lewd and indecent feelings, Approach fills it with civic pride.

The hardest working man in entertainment has been around the block, and planted himself in Lawrence for several years. He spent time in California, but made a beeline for Lawrence after realizing just how precious this music scene is. Since then, it’s been a nonstop lesson in virtue and joy for one’s local music scene. It’s evident in the eyes of every person, young and old, who turns out for his sets. “You don’t really appreciate it when you go away,” he told the audience. “Then you come back and see what you had.” 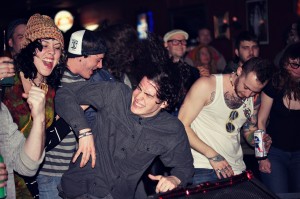 But oh my sweet baby Jesus, let’s talk about The Sluts. This band has reached a major milestone, as far as their place in the scene. Bands in Lawrence go through several turning points throughout their establishment in a community. The most recent one for The Sluts came at a Bottleneck show they played a couple of weeks ago. That was where we noticed the tremendous fan base that has grown for this rock duo. The level of energy and excitement at that show swelled to epic proportions, and the mood bounced back between the band and the audience all night until the crowd became its own living, breathing organism.

But that looked like a delicate tea party compared to the carnage that was brought forth on Saturday at the Jackpot.

Never have we seen so many antics from an audience at a local show. It felt like a raging house party. In addition to hands, arms, manes, and who knows what else flailing wildly throughout the air, fans jumped on each other’s backs and went for a ride. This rampant crowd was worked up, fueled off of the barbaric and distorted riffs coming from The Sluts. At times, we barely heard the vocals because half of the audience was screaming their lyrics at the top of their lungs. One fan even got so worked up, he started thrusting the monitors up into the air and towards the frontman. Imagine getting a major dose of your own vocals right in the face. 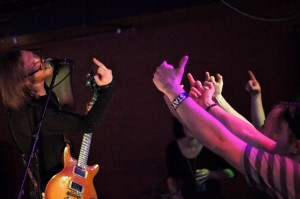 Yes, the Sluts put on a hell of a show. But on Saturday, their fans took center stage. It was a wild show indeed, but there was an organized chaos feel about it. Whenever someone fell, three others came to their rescue to pick them up. You may have been knocked around like a pinball in this pit, but you never fell down the hole. That’s because this audience has time and again delivered for the Sluts. Every fan does their part to make sure the Sluts camp grows heartily and heavily. This may be the year it culminates into one of the most ferocious yet supportive scenes.