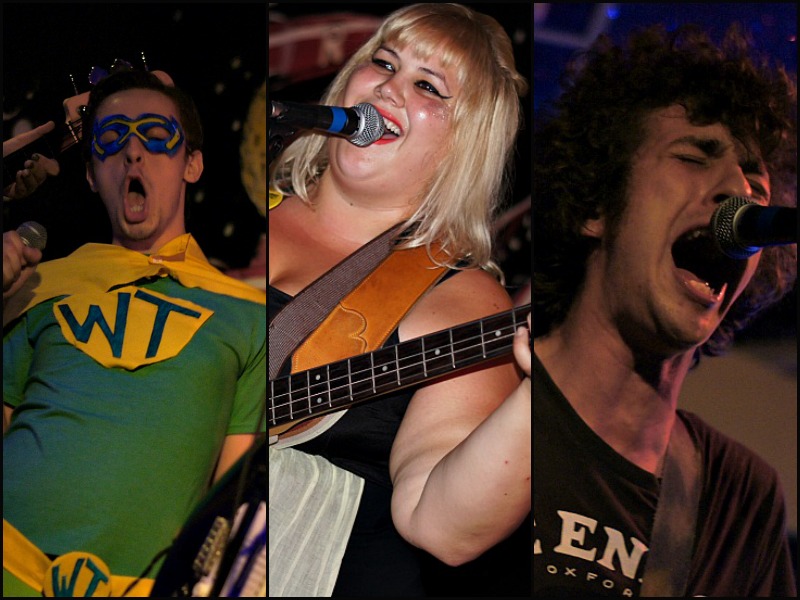 Saturday night was probably the one of the busiest nights of the summer for the Replay, and with good reason. The hype that had been building over the last few weeks culminated in an unforgettable night of boogying and shimmying thanks to a stellar lineup from three bands that came from every corner of the nation. 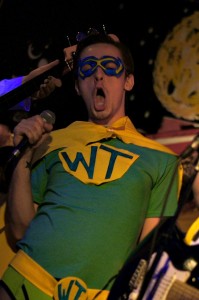 Up first were local doo-wop darlings Dean Monkey and the Dropouts. The band is known for sporting cleverly coordinated costumes, and on this night they showed their heroic side when they arrived in capes, leggings, and masks. The superhero squad are recognized for their goofy getups, but their music is nothing to laugh at. Over the past year, they’ve buckled down and recorded some songs, nailing down their act. The vocals really pack a punch now, and the harmonizing throws audiences in an excitable frenzy. The organ arrangements are particularly catchy, and we’re glad that even with all the seriousness in their music they still keep a little bit of the theatrics.

The highlight of the night featured a guest appearance from Chris Luxem, who showed off his immensely powerful vocals in the following clip: 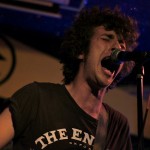 Nude Beach, of Brooklyn, were our East Coast visitors on Saturday, and they burst into the night with loud, perfect strikes on the drums. The mop-topped rockers thrashed about the stage and produced perfectly pitched (and screamy) vocals while impressing with their intense onstage presence. 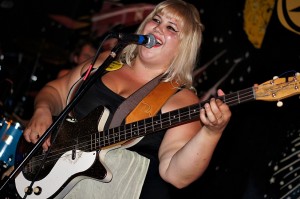 In a grand stroke of luck for Lawrencians, Nude Beach’s tour managed to intersect with California’s Shannon and the Clams right here in the finest music city in the Midwest. So it’s no wonder the Replay, even with a busted air conditioner, was filled to the brim inside and out for the Oakland trio. Even with just standing room only, the revelers still found a way to dance their hearts out to the surf rockers’ vivid and frenzied set.

They shimmied and wiggled while the finely dressed rockers shined onstage (for real, there was glitter all over their shoes and guitars) with their perfectly crafted sound. For every dose of that timeless surf sound, we were given a modern grunge arrangement. For every bit of wackiness they brought to the stage, they also displayed a graceful poise that only fashionable folks can front. Every moment of fierceness was met with charm. This was a recipe for rejoicing, and Shannon and the Clams were our chefs extraordinaire (which might explain the apron Shannon Shaw had on). We hope you brought your appetite, because this was a feast of fantastic proportions for those hungry for rambunctious rock and roll.