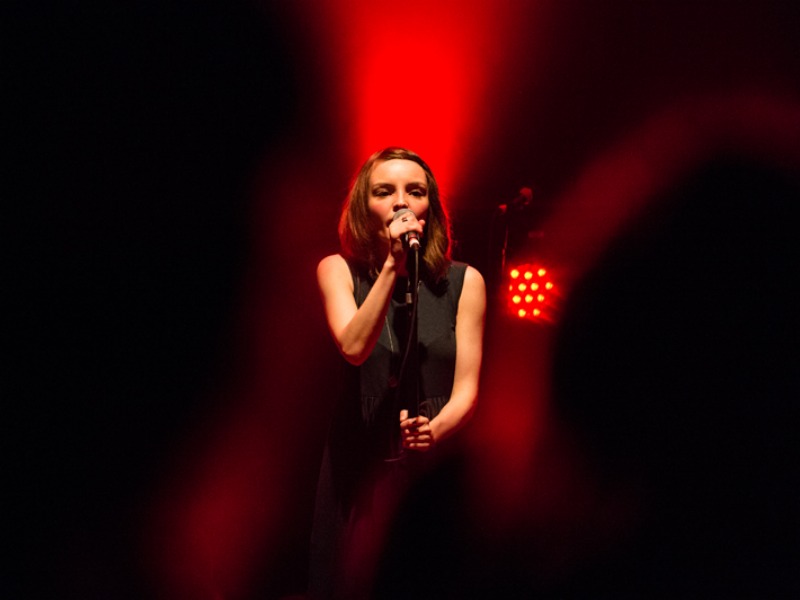 Friday night was a packed affair. Good looking, sharply dressed people from all over found their way to the Granada for a well-anticipated show with two popular electro-pop bands, two beautiful female lead singers, and glittering digital artistry all around.
Still Corners’ Tessa Murray sang lovely, soaring verses on “Fireflies,” “Sea of Love,” and “The Trip” from this year’s Strange Pleasures. Her voice revolved the crowd like a carousel ride as the drummer steadied us on his drum kit. The whole band stood magnified by their shadows from the light play provided by a front-projection of trippy faces and sci-fi laden effects onto the screen behind them.

In her delicious British accent, Still Corners’ Murray apologized politely that they wouldn’t be sticking around, but, unfortunately, would be traveling immediately to Minneapolis. The crowd gave them a hardy farewell and remained perched and ready for the headliner: Chvrches took the stage to no small applause. 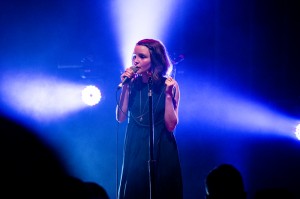 After the first song, Mayberry had the crowd yelling their “I love you” choruses directly at her. The talked-about-lead-singer has sparked a lot of buzz with fans and internet denizens with her good looks and her impressive education. She suggested she was trying not to have a big head; this is no doubt a concern for a smart young lawyer/journalist risen to the ranks of lead singer of the next hot band to watch. But letting slip that she disliked Limp Bizkit (they played at the Granada last Sunday) she felt she had to apologize. (Did someone boo her for this comment? If so…why?) A couple of songs further down the line, she asked for band to just go into the next song because she didn’t have anything to say. She seemed to withdraw a bit from the crowd, not really loosening up again until the encore. Then, like magic, she was back and joking about Bizkit and being onstage in Kansas before the band treated the crowd to a rendition of Prince’s “I Would Die 4 U.”

Throughout songs, Mayberry’s voice came through even clearer than Murray’s earlier filtered lead. At times, Mayberry kept her diamond cutter of a voice at bay, and cleverly released its full force on the band’s hits: “Recover,” “Gun,” and the radio-playing “The Mother we Share.”

During one of the highlights of the show, Martin Doherty jumped in to the spotlight and sang lead, this not being a huge surprise since Recover’s second song “Zvvl” features a male lead. This song Friday night–live and in-concert–worked, and Doherty had the presence of a hip-hop singer as his voice seemed to soar mellifluously through the fog of the stage. Needless to say, the crowd really got into it. They were not the only ones; the light guy, himself, danced as much as anyone and was just as integral to the show as the band. The red and blue lights razored the crowd, and he really seemed to enjoy pumping the switch that shined lights on the crowd, bringing them into the beat of his moves. By the end of the show, this movement was contagious.