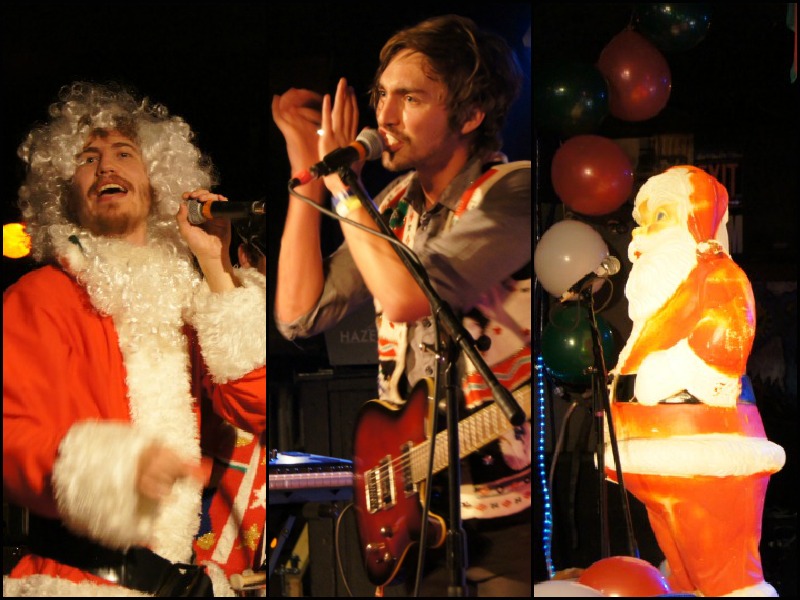 Facebook0Tweet0LinkedIn0Pin0
It’s time to dust off your ugliest Christmas sweater and put on your dancing shoes. Noise For Toys is coming.

The annual musical fundraiser for Toys For Tots boasts an impressive lineup, and those in the giving (and drinking) spirit will enjoy the likes of Sovereign States, Everyday / Evernight, and the rock and roll ringmasters, The Noise FM.

The event moves to the Replay this year, whose halls will most likely be intensely decked. “We just decided to try and get more people into a smaller area and make it a little more intimate,” says The Noise FM’s Alex Ward. “We’re going to have Santa there… probably drunk.”

There will be plenty of room for chumminess and drunken camaraderie. For one, all the musicians involved with the show have known each other for years. “This has been the first time we’ve played with both of these bands before, but we’ve known all the guys for years.” says Ward. “Basically, it’s a bunch of friends who know each other but haven’t gotten to play together. Now, we’re teaming up for a big show.” The bands are also teaming up to bring the audience some surprise Christmas music covers. Stay tuned!

Although The Noise FM was founded in Lawrence, the power-indie-pop group has been calling Chicago home for a few years now. But every December, they’re drawn back to Lawrence to host the charitable event. “We’ve made a lot of friends in Chicago, but I feel like our friendships are in Lawrence,” says Ward. “We’ve had them for so long, so that’s our home base.” Ward admits that with each passing year, the band feels more compelled to let loose (and wear even gaudier Christmas attire). They expect the audience to do the same. “We encourage everyone to wear their ugliest sweaters,” says Ward. “As soon as you put on a different outfit other than your rock and roll clothes, it’s a lot easier to get into the spirit. We’ve built an expectation that it’s more of a party than being a serious rock show.”

Despite the silliness, the rockers can’t help but feel a bit sentimental about the event. “Every show that we put on, we try to make special. But this is our baby,” Ward confesses. “We came up with the whole idea of the benefit concert in Lawrence. Even though we don’t live here anymore, it’s something we look forward to every year.” Ward admitted he doesn’t have any plans of stopping the yearly fundraiser, no matter where they live. “It’s definitely something we don’t want to give up on just because we moved away,” he says. “As long as people keep wanting to come, we’ll keep on doing it.”

Show your support by arriving at the Replay on Saturday night. Don’t forget to bring a toy and your ugliest Christmas attire.

Bonus Video! The Noise FM has been really upping their game with new music lately. Here’s a clip of their most recent Halloween show in Lawrence (the guys love celebrating any holiday in Lawrence, apparently).

Photo Gallery: The Strive / Grenadina / The Perfect Pursuit / The Blos