Liars to bring lush, electronic sounds to the Granada 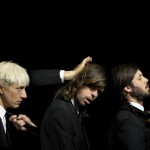 On Saturday, electronic music lovers will want to find themselves at the Granada for Liars. Thanks to their latest album, WIXIW, the experimental rockers are now performing in a sea of electronic noises lush with synth sounds. We talked with Aaron Hemphill to discuss the transition to this new sound.

Up until WIXIW, Hemphill says recording with traditional instruments in a studio was an “organic” experience. When they wanted to take control of their latest project and not lose the creative idea in the recording process, the band looked to a lot of software. “We’ve always used computers to record, but we’ve never used them as an instrument,” says Hemphill, who realized that recording electronically put a whole new world at their fingerprints by building an idea on top of a single sound. “We built the songs on sound, things that sounded interesting to us, and kind of worked backwards from that way. Interesting sound, then converting them to songs.” 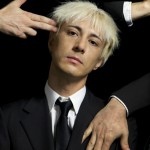 Just because the band has indulged in a world of electronically recorded sounds, don’t expect a cookie-cutter set at their show on Saturday. Hemphill says they’ve been embracing opportunities to show the music in a new light, instead of replicating it perfectly on stage. “Our goal is just to show our connections to the music, and bring something that is more of the occasion, where anything can go wrong,” says Hemphill. “We emphasize mistakes and that nature because it’s a live event. We try to focus on ourselves, really… how we can express these songs in a unique way.”

Over the past ten years, Liars have moved from Brooklyn to Berlin to LA, and the past year has kept them cooped up in a studio redefining their sound. Now, they’re starting a series of lengthy tours that will no doubt leave them exhausted. But Hemphill says there’s a reason they keep going. “It’s really the only thing that I have, the only thing I can do, and I love to do it,” says Hemphill. “I think it’s important, in a very selfish way, it’s an outlet and it just sort of helps us fit in with the world and connecting with the world. There’s other ways we haven’t been able to do that, we can’t do that through other ways.”

Hemphill says he hopes touring will help them make those connections and offer more insight on their music. “Anything that helps communicate our ideas is very exciting to us,” says Hemphill. “With this record, it’s been an especially big challenge to do the instrumentation and how new that is to us. But it’s a creative challenge, an exciting challenge, one that we’re very happy to tackle.”

See how they tackle the challenge when they play the Granada on Saturday, July 14.

Here’s a music video for their latest single, No. 1 Against The Rush. Warning: graphic content (they all get murdered).

Next post Lower Dens delivers inspiring performance at the Jackpot