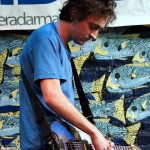 If there’s one band you dare not miss at Kansas City’s upcoming Middle of the Map festival, it’s Hooray For Earth. The New York-based band has been touring in support of their latest album, True Loves, but has failed to stop by our neck of the woods… until now. 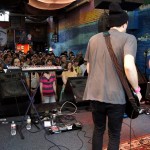 Hooray For Earth plays to a packed house at SXSW

Frontman Noel Heroux and bassist Christopher Principe have been friends since their teenage years, so it’s no surprise that they’re very in tune with each other onstage and in the studio. True Loves has been receiving high praise across the nation, sporting thick electronic sounds mixed with rich, reverby guitars. Heroux’s vocals echo throughout the record, telling tales of love, desire, and emotion.

The band played to a packed house at this year’s SXSW music festival. They were invited to play Under the Radar’s party, and by the time they took the stage the line was already one-in-one-out… and with good reason. The trio played a gorgeous set that made their fans’ hearts soar. Their vivid rhythms resonated throughout the venue, nearly entrancing the audience.

We can’t say enough good things about this band, and had the chance to talk with them about their plans for Middle of the Map fest. See our interview with Heroux below.

Next post Shows you should see this weekend: March 30-31

Previous Article Photo Gallery: The New Amsterdams at the Jackpot