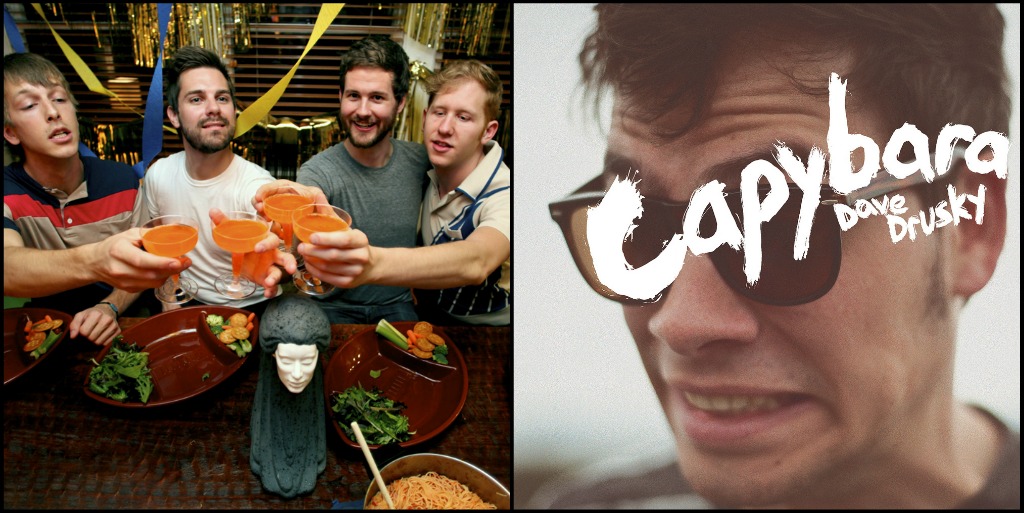 Facebook0Tweet0LinkedIn0Pin0
We don’t know if it’s the diverse live shows they’ve been exposing themselves to, but something has evoked a great change in Capybara, and it’s simply fantastic.

The band is set to release their latest album, Dave Drusky, on February 7th. Named after a mutual friend of several of the band members, the record is a heartsick, high-spirited, and unexpected display of storytelling. We get all the perks of the band’s new turn on songwriting, yet we’re still treated to the same uplifting demeanor we’ve come to know from the boys.

There’s no doubt the first track, “Late Night Bikes” is one of two standout singles on the album. The song is a cluster of nostalgic emotions ranging from the ones we face on our journey from free youth to impending adulthood. The song plays out like a coming-of-age tale, taking us on an anxious journey through our developing days all the way to melancholy maturity.

“Neighbor Crimes” is the other standout track on the album (with a standout arrangement to go along with it). The dynamic vocals capture a wide range of soaring sentiments from start to finish. This is where you can tell that the band has a finesse for musical forte. We’re treated to harmonizing vocals, a diverse mood, and a lovely breakdown at the end.

The band has been making a point to incorporate more organ sounds into their music, and that’s exactly what leads us into the swaying and drifty “Pierre Benusan.” We also get a dose of the band’s infamous haunting vocals on “Wild,” which may be the most heart-wrenching track on the album.

Those same vocals take a turn for the perky in “Bill Dabbler, Lorn Line” and “Ruby Eyelids.” This is where the album gets playful, with cheerful keyboard arrangements and bubbly beats. “Kimberly Lydell” is also a bouncy number, but halfway through the song we’re introduced to another one of those haunting vocal arrangements (just briefly). Capybara never lets you get away with being bright-eyed and bushy-tailed for too long, and before we know it, “Vandals” is bringing us back to the surreal.

The album plays like an epic movie soundtrack. It starts with a sound-rich introduction, then the story unfolds with emotion-wrought verses and spontaneous twists and turns. The final song, “Leaflet,” ties up the melodramatic epilogue. “I say to strangers what I say to my friends, where do we begin.” It ends on a bit of a somber note, actually… a final blow to the heart.

It’s hard to believe this was the result after a long absence from the band, who claim they had to take time off “to get real, full-time jobs” and even called upon Kickstarter for help getting their music going again. But if you’re only picking up a handful of local records this year, make sure Dave Drusky is one of them. The album is a wild ride of emotions. It’s uplifting and heavyhearted, it’s morose and magical, and it confirms what we’ve been suspecting all year: Capybara has made the transformation from local indie band to stellar artists unmatched in wit and musical craftsmanship.

A solitary sound: Amen Dunes to play the Jackpot