Those who thumbed their nose at the weather and made it out to the Replay on Thursday night were handsomely rewarded with a breathtaking show. Lush vocals, enchanting beats, and enticing lyrics kept us well-shielded from the frightful weather outside. 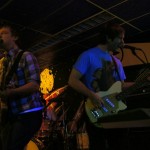 Deleted Scenes at the Replay

The Replay stage was already crowded when Deleted Scenes took the stage. So crowded, in fact, that one of the keyboards was placed on the floor outside of the stage.

The Lawrence scene was fairly psyched for this band. This was the first show in their tour with A Lull, which was nice because (being in the Midwest) Lawrence usually catches bands in the middle of their tours. But on Thursday night, Deleted Scenes came packed full of optimism and high energy.

Despite their luscious vocals, the band managed to always sneak in some pretty dancey beats; and before we’d realize it, some of us were bopping up and down along with the musicians.

I suspect the lead singer is fairly cheeky. Right before the last song, he leaned into the mic and said “Let’s do it. This is called ‘bedbedbedbedbed.’ These are all love songs, but this is a major one.” 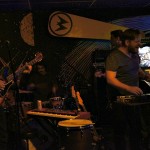 A Lull at the Replay

Very few bands can pull of the dual drummer act very well; but if there’s one band who actually can perform such a first-rate feat, it’s A Lull.

The Chicago-based band delivered on their percussion extravaganza, and the ladies were a-swayin. The mustachioed drummer boys kept the energy high throughout the set, and frontman Nigel Dennis’ vocals were absolutely mesmerizing.

I’m not sure how they did it, but the five-piece band (with two complete drum sets and more) packed onto the Replay stage like sardines. It left no room for a frisky performance, but plenty of room for their all-encompassing sound. It was like a luscious and warm blanket wrapped around us, shielding us from the cold of the night… nothing but us and the band basking in the glow of the Replay pinball machines and the ultra-romantic lyrics.

They played several songs off of their album, Confetti, treated us to some new ones, and even delivered an eerie and sensual cover of Bruce Springsteen’s “I’m On Fire.” The boss never sounded so sexy. 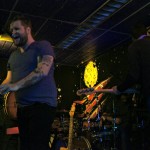 A Lull at the Replay

They ended their set with their hit “Weapons For War,” which left the audience cheering and demanding an encore. The band was happy to give it to them, it was the least they could do for the fans who braved the ridiculous weather in order to spend the night with some of the most savory sounds of the year.

Next post Photo Gallery: The Kinetiks / The ACBs / Sona

Previous Article Don't miss this show: A Lull at the Replay