Don’t miss this show: A Lull at the Replay 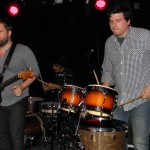 On Thursday night, you’ll want to find yourself at the Replay. But you won’t be alone; fans will be forced to share the small space with the massive force that is A Lull. The band boasts two full drum sets (with wild-haired drummers), lush sounds, and oh-so-smooth vocals.

The Chicago-based band is kicking off their winter tour with the Lawrence show, but this won’t be their first tango with the Northeast Kansas audience. Those who caught them at Middle of the Map Fest in April were quick to snatch up the band’s latest record, Confetti. Midwesterners tend to know a good sound when they hear it. “I think the Midwest… they’re impressed by music more,” says frontman Nigel Dennis. “It’s just that they have the desire for it. I’m not knocking New York or L.A. or any major area, but they’re just so saturated, so music is more appreciated in the Midwest. I think we’ve had a really good audience in the Midwest for that reason.” 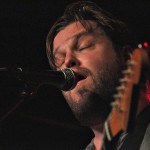 Nigel Dennis at Middle of the Map Fest

In addition to being treated to new songs from the band, Replay patrons will also get a full dose of throbbing beats when the band hauls their drummers in from Chicago. But the drums didn’t always take center stage at first. “When we started recording Confetti, we basically started recording as a three-piece. So the constraint of a single drum set was never an issue,” says Dennis. “We kept recording and recording and recording percussion. Then we started to realize there was no way one person would be able to accomplish what we recorded.” Dennis admits the energy that accompanies a performance with two drummers (who never play the same thing at the same time) can become overwhelming and fantastic. “The nice part about having two drummers is you get real life stereo.”

That energy will be intense as the band kicks off this most recent tour. Playing several cities in a row can become exhausting, but Dennis says that’s what helps the band develop their sound. “There’ something sort of liberating about touring,” says Dennis. “We talked about being excited for this tour because we need to get out creatively. Going out and playing is a possible quick remedy for that, you get new ideas when you play music every day.”

After the tour, the guys will be taking a much-needed mini-vacation. But after that, it’s back to work. “We’re going to take a couple of trips individually, then continue writing,” says Dennis, who says they’ve got to get some new music out there. “I’m a firm believer in putting your best foot forward, and if that’s releasing a song one at a time then that’s what it is.”

Watch A Lull put their best foot forward Thursday night at the Replay.

In the meantime, enjoy this incredible clip: