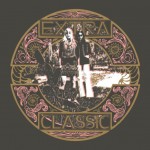 Your Light Like White Lightning, Your Light Like A Laser Beam is an amazing sounding debut album from San Francisco and Lawrence-based Extra Classic. The band is a joint venture of Adrianne Verhoeven and Alex deLanda, two successful musicians who also share a love of Jamaican music. The band’s regular members are all from Lawrence, including talented drummer Josh Adams (Ghosty et. al.) who seems to change into a Reggae percussionist like people change socks. In short, this is a group who met in Lawrence, found their Jamaican bones and moved to San Francisco where they put together a really superior, genre-defying album.

The production on Your Light… compares to albums like DJ Vadim’s dub-oriented Soundcatcher or the glossy Beatles versions done by Easy Star All Stars. To contrast their song writing, when I thumbed through my recent years’ collections I found them akin to Dub Syndicate, Prince Fatty, or maybe Thievery Corp and Up, Bustle and Out (although nothing touches the enigmatic U.B.O.). Among their downtempo songs, the slower they are the less dubby they sound, winding all the way down to the lugubrious Angel Eyes, which matched most closely with Mazzy Star among my thin (but precious) stack of slow stuff.

All this quality was the product of years of hard work, noted Adrianne Verhoeven in a recent radio interview with yours truly on KJHK. The secret sauce was a painstaking mixing process on reel to reels in the SF-based analog studio of Alex deLanda, who spent years assembling the vintage setup piece by piece. The other critical element was the great musicianship of the artists, she pointed out, whose skills benefited the project tremendously.

Extra Classic already has a foothold in the UK, where mainstream music is more diverse and there is a legendary interest in Jamaican sounds. They’re looking at a British tour for the upcoming year, and they’re also well along on North American tour dates with a Lawrence stop somewhere down the line. Their double LP is being released by Manimal Vinyl, and they’re carried digitally by the usual online sources.

I’d like to thank Adrianne for taking time away from dinner with the President to give all the details to Lawrence listeners and myself. And, I hope to someday see them play in the UK; although reality and this cold weather would rather suggest I’ll be snow-shoeing down Mass Street to go see them.

Going all out: The Noise FM return for massive holiday fundraiser

Making movers and shakers with Minden