Going all out: The Noise FM return for massive holiday fundraiser

Deck the halls, The Noise FM is coming to town.

The indie pop band is back in town on Friday for their yearly holiday fundraiser “Noise for Toys,” but this isn’t your grandmother’s charity show. The Noise boys will be packing a punch when they raise money for Toys for Tots thanks to an overflowing lineup featuring some of the area’s most popular bands, a sweater contest, door prizes and more. “This will be our third year of doing the Douglas County benefit concert,” says singer and guitarist Alex Ward. “We do it for fun. We encourage everyone to wear their nastiest, ugliest Christmas sweaters, go all out with decorations. We want to make it more of a special event than a concert.” 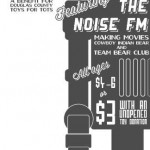 On Saturday, Ward and his bandmates will be joined by locals Cowboy Indian Bear, Making Movies and Hawley Shoffner; and for those looking to party all night, Lawrence’s most fabulous party-planners Team Bear Club will be rounding out the night with a dance party. If you haven’t been bit by the holiday bug this year, you may very well get into the spirit of Christmas with this show. The Bottleneck will not only be decorated with tinsel, balloons and a Christmas tree; but the big man himself will also make an appearance. “We’re going to get Santa Claus and take pictures,” says Ward. “It’ll probably be a drunk Santa Claus, but it’ll be Santa Claus nonetheless.”

It feels like with every passing day, Ward is trying to gussy up the show a little bit more to make sure this isn’t your average rock concert. “The first year, so many bands wanted to be a part of it,” says Ward. “I thought ‘Let’s do it. Mix things up for a little bit instead of just doing our regular show.'” But the show doesn’t need too many tricks and turns to be memorable. The night will also serve as a CD release show for Shoffner and a fond farewell for The Noise FM’s bassist Oliver Mosier. 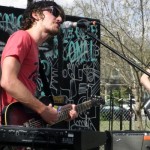 The band has been living in Chicago for the past year, but during that time Mosier remained in Kansas. So Saturday’s event will be his final Lawrence gig with the band, who still consider themselves Lawrencians at heart. “Even when we’re in Chicago and someone asks us where we’re from, we say Lawrence,” says Ward. “If there’s one thing we can keep going and come back for every year, it’s Noise for Toys. That’s one thing associated with our band and something we’re proud of.”

Now in it’s third year, Ward says organizing Noise For Toys is a piece of home that keeps him connected with the community. “I feel like before we moved up to Chicago, we were always extremely happy with how people responded to our music,” says Ward. “But then when we did the first Noise For Toys, people really connected with our band and understood what it was all about: having a good time and throwing a party. If we can do that for a cause, all the better.”