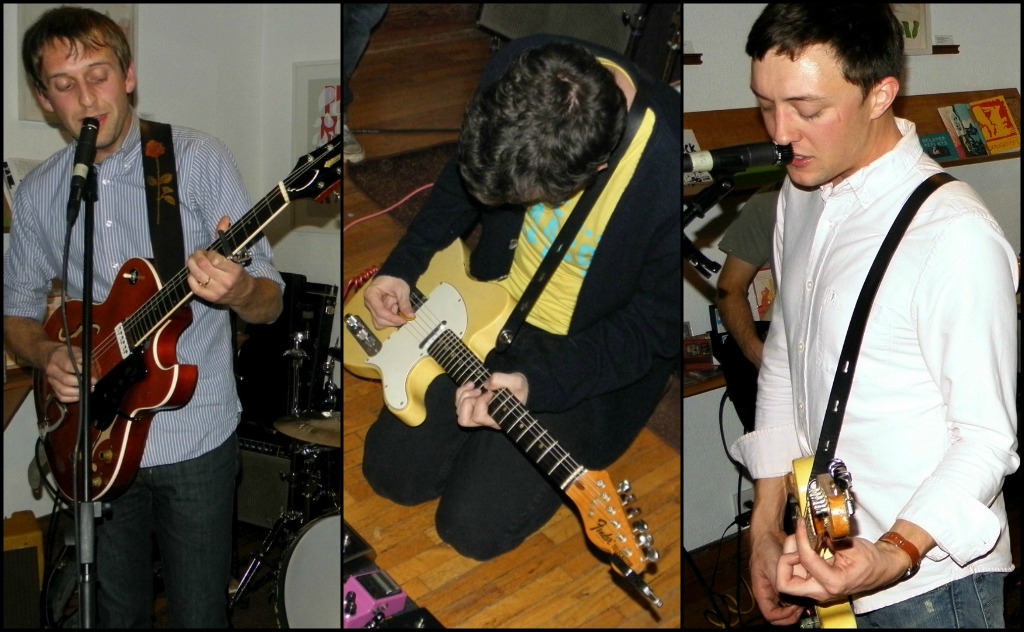 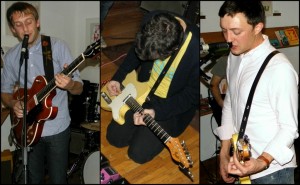 On Tuesday night I got the feeling that the folks over at Wonder Fair really enjoy the holiday season. Upon entering the art gallery, which sits perched above The Burger Stand, I was greeted with little puffs of cotton meant to resemble snow hanging all over the place. You could hear Christmas music blaring and there were holiday sweaters as far as the eye could see. Just beyond the windows were the Christmas lights that decorated downtown Lawrence.

The venue was already packed by 8:15. An early show is a real treat in Lawrence, considering most shows don’t start until well after 10:00 p.m., so the turnout for this particular event was impressive. I’m also a firm believer that one should never miss opening bands, and this was never more true than when Ghosty opened for Someone Still Loves You Boris Yeltsin.

The band was scrunched up in the corner of the gallery. The small venue made for an ultra cozy set, especially when they dimmed the lights.

Ghosty’s frontman Andrew Connor has been a familiar (and expressive) face in the Lawrence and Kansas City music scene for more than a decade. So at this point in his musical career, he makes it look effortless.

The band played a lot of favorites, including several of their signature bittersweet songs. They even treated the crowd to a cover (posted below). Connor played with a tiny set list tucked under his foot, and every now and then the band would make eyes at each other and smirk. They, as well as their audience, were pretty pleased with their set.


Someone Still Loves You Boris Yeltsin

Someone Still Loves You Boris Yeltsin kicked the night into high gear with their energetic performance.

The small space didn’t hinder the showmanship of the band. They jumped super high, kicked and bounced about the stage. Their stamina and charisma was infectious, and throughout the night each member of the band mastered the art of merriment.

Their energy was through the roof, and that was reflected when the band played musical chairs and switched instruments. They hardly let a single second pass between songs and played nonstop throughout the evening.

One member of the band payed homage to the local music scene. He was sporting an ACBs shirt (Connor plays in that band as well) and gave props to one of Wonder Fair’s owners (Paul DeGeorge) who plays in Harry and the Potters.

There was plenty of audience interaction to be had, as folks clapped along to the music, stomped their feet, and roared with applause at the end of each song. I even heard a few concert-goers quietly singing along to themselves, and some were dancing so hard that the floor felt like it could cave in.. The excitement of the night simply couldn’t be contained.

Someone Still Loves You Boris Yeltsin are truly the kings of fun and provided Lawrence with a perfect poppy pick-me-up for the holiday season.